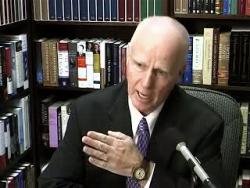 It’s hard to tune into a television or radio newscast or pick up a newspaper or news magazine without seeing a story about the dangers linked to global warming. We’re told that people are responsible for dangerous levels of greenhouse gas emissions that are endangering the environment. But what is the science really saying? Bob Ferguson, president of the Science and Public Policy Institute in Washington, D.C., has prepared state-by-state reports on climate change, including a February 2008 report for North Carolina. He discussed his findings with Mitch Kokai for Carolina Journal Radio. (Click here to find a station near you or to learn about the weekly CJ Radio podcast.)

Kokai: People who are looking at their newspapers, watching TV, listening to the radio are undoubtedly hearing and seeing and reading stories about global warming and how people are endangering the environment. Do the facts say that this is what’s actually happening?

Ferguson: No, they actually don’t. In fact, science — particularly in the last 10 years as we’ve spent billions of dollars, literally, investigating the science of the atmosphere and interactions of greenhouse gases and the Earth — we’ve found out an awful lot, which makes the case for the alarmism even less and less as it goes by. I think one true measure of those who are the most extremist and activist on this issue is that the weaker the case gets for them, the more shrill and alarmist they get. And the numbers of sea level rise or extinctions or whatever keeps going up, up, and up. And it’s become extraordinarily shrill, which in itself, on its face, should give people pause that something strange is going on here.

Kokai: So the louder that we hear the global warming alarmists getting, the more we should take what they’re saying into account and perhaps say, maybe this is not what’s really happening.

Ferguson: Exactly right. One thing I would like to make clear is that there often is put up a false argument here: that people who don’t believe that we’re having catastrophic manmade warming are some sort of denialists or whatever. The fact is, it isn’t whether the Earth’s in a warming phase. It goes through cycles … periodically … we’re in what’s called the modern warm phase. It’s not as warm as it was in the Medieval period or the Roman warm period, but we’re in a warm phase. And this is what happens in interglacials — that period between major glaciations, about every 10,000 years. So there isn’t an argument about that. The argument is about how severe is it going to be, what attribution can we give to human activities as opposed to natural variability such as solar cycles, ocean dynamics, and can we really do anything about this, if this is mostly natural. We have spent billions of dollars, distracted ourselves from some serious problems that we could have some real impact on, for basically what is an illusion.

Kokai: You mentioned natural variability, and that ties in well with the fact that you and your organization have put together a report on climate change in North Carolina.

Ferguson: Yes, we have.

Kokai: One of the key facts that I noticed in [the report] was that you say climate trends in this state are not outside the natural realm of natural variability.

Ferguson: Right. We looked at statistics from the state — of climate aspects such as average annual temperature, seasonal temperatures, precipitation, drought events, hurricanes — because Cape Hatteras has the dubious distinction of being the most hit location in the United States except for southern Florida. We looked at those issues. We looked at vector-borne diseases — people are worried about malaria, dengue fever, the bird flu, and stuff like that — to see if there’s anything really unusual going on, and we found that simply wasn’t the case. And, you know, if you’re interested in any particulars, we can talk about those.

Ferguson: Absolutely. What people have to realize is that you have natural flux that goes between the oceans and the soil and the atmosphere, which are, in terms of gigatons, enormous, just immense. [They] dwarf anything man ever puts out. But if we look at just human emissions worldwide, the average increase in emissions is about 3.5 percent per year for human emissions. And China, by far, is now the leader, even surpassing United States, in raw emissions of CO2 in the atmosphere.

So if you look at a state like North Carolina, a lot of these mitigation programs for the state are put together with an idea that we’re going to do something good. This is mainly feel-good because it has no real impact at all. And I’ll give you a key example. If you were to shut down the entire state of North Carolina — I don’t mean in mitigation, like reduce [emissions] 10 percent in three years or something — I mean shut the whole thing down, no campfires, no barbecues, move everybody out of the borders — the “savings” of CO2 emissions would be replaced just with the growth — I emphasize the growth — in China in 11 months. So basically it’s a perfect scenario for all pain and absolutely no gain.

Kokai: You mentioned all pain, no gain. North Carolina legislators and the Legislative Commission on Global Climate Change are considering a number of policies that are designed to cut CO2 emissions to help with global warming. Would these policies have any noticeable benefits for what we already know will be quite substantial costs?

Ferguson: No, they won’t. In fact, if you want to look at it at a macro level, look at the Kyoto Protocol, which is supposed to be a worldwide emissions control. Even if the Kyoto Protocol was implemented, including China, Indonesia, India — all nations which have emphatically said we will not punish our people, we will not keep them in poverty because of this theory — but if you put them all in there, even the U.N. and the advocates of this policy admit that all it will do [is] postpone a minor temperature increase by 2100, by six years. So you’re going to get there anyway. So if you look at a state like North Carolina, the only thing it will do is enrich a lot of people in carbon credit trading, building windmills, alternative energy, who get major subsidies. But as far as doing anything climatically, it won’t.

Kokai: I want to touch on one other item because I’m sure there will be some people out there who will say, okay, Carolina Journal Radio has found one of the handful of skeptics of global warming who is spouting this [theory]. Your report also mentions the fact that there are a number, a substantial number, of scientists in this state, North Carolina, who agree that global warming alarmism has gone too far.

Ferguson: Exactly. One thing that we all can agree on, I hope, is that consensus does not make scientific fact. Science doesn’t work that way. Consensus is a political term, and it’s a political process. However, the other side wants to play this card. So what Art Robinson did, without any funding from industry, all on his own, he did a petition drive throughout the United States to just say, look. He had a paper, which is on our Web site — scienceandpublicpolicy.org — and what he did is, he said, here is the science, a review of the literature, as it currently stands. Once you look this over, do you really think we’re in for a planetary catastrophe? And the people wrote back and said no and signed a petition to the federal government and the state governments to not [enact] public policy on this issue, based on this theory, because it will be damaging, not only to our prosperity, but to the planet itself. They got over 32,000 signatures from across the United States of people with science degrees — bachelor’s, master’s, over 9,000 Ph.D.s. Now they’re not all climatologists or atmospheric physicists. Of course, people on the other side aren’t all [climatologists or atmospheric physicists] either. And of that 32,000, 610 were from North Carolina.

Kokai: So 610 scientists in North Carolina have said that the degree to which this alarmism has gone is too far. [Editor’s note: The petitionproject.org Web site now lists 638 signatures from North Carolina.]

Ferguson: Yes, and that there’s no natural evidential basis for the alarmism that we are going to head into catastrophic global warming.