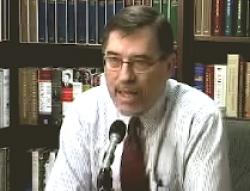 Speculation over whether Congress might reinstate the Fairness Doctrine has been growing in recent months. Conservative talk show hosts have been expressing concern that the new Congress might step up its efforts to renew the doctrine as a way to correct what some liberals think is a lack of diversity in media coverage of public issues. Jon Ham, publisher of Carolina Journal and former managing editor of the Durham Herald-Sun, discussed the issue recently with Donna Martinez for Carolina Journal Radio. (Click here to find a station near you or to learn about the weekly CJ Radio podcast.)

Martinez: Well, it seems, Jon, as if New York Sen. Chuck Schumer really reignited this conversation on election day when he did a television interview and essentially advocated for the return, the revival, of the Fairness Doctrine.

Ham: Well, he sort of slyly compared it to the regulation of pornography — and he did that with a smile on his face, if you’ve seen the video — he knew what he was doing. He was sort of throwing it out there. Now, Barack Obama has insisted he’s not going to push for the reinstatement of the Fairness Doctrine. But a lot of people on the Left are talking about the problems, as they call them, of talk radio. What they see as unfairness is the fact that talk radio is dominated by conservatives. They don’t seem to understand that it’s a market, and that the demand for left-wing talk radio is not there because they don’t feel the need for it, since most of the media is liberal. And I think many academic reports, and even some recent comments by journalists, bear that out, especially during this last election.

Martinez: What is the Fairness Doctrine? What would it actually impose if it were to be re-enacted?

Ham: Well, if people remember, back in the dark ages of the ’70s, if you had somebody giving a political point of view on the public airwaves, you were required to provide balance. What that did was – it didn’t force or entice producers to go find the balance – basically they just stayed away from political topics and basically squelched it. I have a good example of something that happened in 1976 when I was in Virginia editing a newspaper. Jerry Falwell castigated Jimmy Carter for his Playboy interview, in the pulpit. And this is a sermon that was going to be aired later. The Democrats heard about it and they challenged it on the basis of the Fairness Doctrine. They wanted equal time. Well, what happened was, that sermon didn’t air. So that’s what happened. It’s not that you get the balance; you just get less political content.

Martinez: And, in fact, that’s what critics of the Fairness Doctrine say they want to try to avoid. They say, you know, if this comes back, it’s just going to squelch free speech. It’s not going to expand anything. And in fact today, Jon, there are so many sources of information. Why would there be any talk at all, realistically, of bringing something like this back?

Ham: Well, there are a lot of people in journalism — a lot of editorial writers and columnists have sort of pooh-poohed the notion that this is a serious effort — but they don’t see a lot of the comments coming out of Congress. There are people who are serious about doing it. Now some are saying that, well, what’ll happen [is], there’ll be a push in Congress to do it, and Obama will say, “Well gee, my name is not on that.” I don’t know if it’ll happen. I think when people really get down to thinking about it and realize how stifling it was prior to this — [prior to] the repeal in 1987, when there was nothing but dullness, especially on AM radio — AM radio was dead before talk radio. Now some are saying that they’re going to get by this, not by bringing back the Fairness Doctrine, but by pushing this localism theory for local radio.

Martinez: And what’s that?

Ham: Well, the balance would be local programming. I’d imagine that if you have somebody – like in Raleigh or the Triangle you’ve got [WPTF talk show host] Bill LuMaye. Well, he’s local. You’ve got local content. Some markets don’t have that. And so some are saying that, rather than do the Fairness Doctrine itself, they’re going to go to the FCC and say, well, you know, they’re not balancing Rush Limbaugh or Laura Ingraham with anything local and, therefore, you need to pull them off and put something local on there. There’s some talk that they might use that tactic to get around it. But I think it’s a serious threat, and it’s one of those things where, if you don’t alert people to it, if you don’t get concerned about it, then it will happen. And so maybe this is all a good thing – that a lot of people on the Left are saying, “Oh, you’re overreacting.” Well, you know, overreaction against the loss of freedom is not a bad thing.

Martinez: That’s a key point, I think, because, clearly, freedom of speech is something that is fundamental to the U.S. society. It seems to me that reasonable people would want to error on the side of allowing speech, not trying to clamp down on it.

Ham: Well, there are some people that — with a totalitarian bent — that see the availability of an opposing viewpoint as a threat.

Martinez: Jon, this was repealed in 1987. So at some point, there was enough support, enough people felt that it was time to get rid of it. Are we just seeing a cycle here in politics?

Ham: Well, I’m trying to think of the history of it. It was a vote on the FCC – Federal Communications Commission — that did that.

Martinez: Rather than the Congress.

Ham: Right. And now what they’re trying to do — the people who are concerned about it are trying to get Congress to actually pass legislation saying we will never put the Fairness Doctrine back into play. And so I think if it happens, it will happen because people who are in favor of it get enough votes on the Federal Communications Commission.

Martinez: Jon, you are the publisher of Carolina Journal. You have decades of experience in journalism. You’re the former managing editor of the Herald-Sun in Durham. How do you approach this issue of fairness or objectivity in telling a story — in reporting?

Ham: Well, if you’re a mainstream newspaper editor, you try to get fairness within each story. We all know that doesn’t happen all the time. And, in fact, it’s happening with less frequency today. But you try to balance viewpoints. If you’re going to write a story saying that X person says this is bad, then you should find somebody who says, well, this is good, unless it’s some heinous crime or something. You look for that balance. Sometimes people argue that, by searching out an opposing viewpoint, you’re actually skewing inaccurately. You’re giving each 50 percent of the weight, and quite often you see that happen. Because some fringe viewpoints – when you have what they call a valence issue, where everybody agrees with it – you search out sort of the fringe, opposing view, you’re giving it as much weight as the one that 95 percent of Americans agree with. That’s been a criticism of journalism for 100 years. But you try for balance now. On the editorial page, for years, balance was not sought after, and then along came the notion of an op-ed page, where people would give an opposing viewpoint. Well, even then, it’s usually like a 10-to-1 ratio. You know, if you’re a liberal newspaper, you might throw George Will on once a week and be happy about it. But, I guess balance is in the eye of beholder, but it should be strived for.