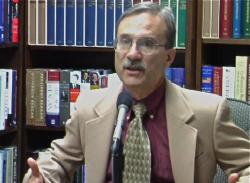 Debate over President Obama’s so-called economic stimulus plan introduced the phrase “Keynesian economics” into the average American’s vocabulary. This once-discredited approach to fiscal policy seems to have made a comeback in some circles. Dr. Roy Cordato, John Locke Foundation vice president for research and resident scholar, explained the enduring appeal of Keynesian concepts during an interview with Donna Martinez for Carolina Journal Radio. (Click here to find a station near you or to learn about the weekly CJ Radio podcast.)

Cordato: He was an early 20th century economist, probably the most influential economist of the 20th century, and now looking like maybe the most influential economist of the 21st century. But he wrote a very famous book called The General Theory, which came out in 1936. Basically its approach was what one might call demand-side economics — that the economy is driven by spending, and when recessions are caused by not enough spending, the government can get us out of recessions by stimulating spending.

Martinez: Did this first come to the forefront in terms of the Great Depression and Roosevelt?

Cordato: Yes. Keynes was a favorite of left-leaning politicians, so-called progressive politicians, of the early 20th century — FDR being one of the most prominent followers of Keynes. But there were certainly others. And the first massive Keynesian policy was the New Deal. … So yes, he started a movement in economics, and his view became very easy to teach because it became very easy to put in graphical form, so it found its way into all the major economics textbooks by Paul Samuelson and others, and became the dominant approach to macroeconomics during the 1950s, ’60s, and into the ’70s.

Martinez: Let’s talk about the New Deal, Roy, because there seems to be a debate. There seems to be a group of people who are telling us that because of Keynesian economics, the United States was lifted out of the Great Depression and, therefore, we should follow this theory today to get out of our current recession. There is another group however — that you belong to — that says wait a second, that’s not the case at all. The Depression was extended because of Keynesian economics. Explain.

Cordato: Well yes, historically I don’t think you can find an example of Keynesian policies getting us out of a recession. In fact, what happened was, the New Deal really got cranked up in 1936, and what you saw almost immediately between 1936 and 1940 was a massive increase in the unemployment rate. We had falling unemployment through the first half of the 1930s, the New Deal was put in in the second half, and it started to crank back up again so that by the end of the 1930s, we were looking at 17 to 18 percent unemployment. So it really has never worked and, in fact, it can’t work because the government can’t spend anything, can’t put anything into the economy that it doesn’t first take out of the economy — that’s just the way it is. It has no resources of its own.

Martinez: Despite the fact that you have said there really is no evidence that Keynesian economics gets us out of a recession, it clearly now seems to be the platform from which many people are advocating that we move forward in this country today. Why a rebirth of Keynesian economics?

Cordato: Well, it’s the kind of economics that politicians love — especially leftist politicians who want a lot of power in the hands of the state — because what it does is, it says look, the government can basically get us out of recession by spending massive amounts of money and running big deficits. That’s exactly what politicians want to hear, right? We can spend. We can put lots of money into all our pet projects. We can essentially pay off all of our constituencies with spending, and we can call it stimulus, right? And not only can we call it stimulus, but we have this famous economist backing us up — John Maynard Keynes.

So I think the reason why there’s a rebirth is because it appeals to politicians, and it always has. The fact is, it’s a bizarre kind of view. It was discredited especially in the 1970s because the Keynesian model says, for example, deficits are good for the economy. It also says you cannot have unemployment and inflation at the same time. This was the big kicker for Keynesian economics — in the early 1970s when we had something called “stagflation,” where we had rising unemployment and rising inflation at the same time. Under the Keynesian model, you can’t have that; that’s impossible. And that’s where it kind of fell apart, became discredited. What was call supply-side economics — as opposed to demand-side economics of Keynes — started to come to the forefront. We started to see Reagan’s tax cut policies and so on. But we thought it was dead and buried, much like Keynes himself.

Cordato: Basically, the supply-side approach would say look, markets will work to get us out of recession. A recession is a situation where there have been lots of bad investments made in the economy. What has to happen is, there has to be a reallocation of resources to entrepreneurs who can do better things with those resources. So the supply-side says let’s get government out of the way, cut taxes, certain kinds of taxes, marginal tax rates, the kinds of taxes that will encourage people to save and invest, and shift the focus away from demand, from spending. And it says no, an economy is driven by production and we have to make way for that production to happen.

Martinez: Roy, as we speak, demand-side policy, Keynesian economics, is indeed winning the day with the Obama administration. As an economist, what would you predict we’ll see down the road with the implementation of Keynesian-type policy?

Cordato: Certainly these policies will not get us out of our current problems, and, in fact, they will make them worse. What’s going on right now is a huge distortion of the economy through massive government spending and government debt, and I see no good coming out of any of it.