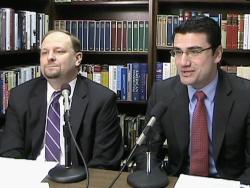 Most of us consider ourselves to be law-abiding citizens, but can we really be sure we aren’t breaking some law — somewhere, sometime — during our normal daily activities? Director Jim Copland and deputy director Isaac Gorodetski of the Manhattan Institute’s Center for Legal Policy offer information designed to address that question. They spoke to the John Locke Foundation’s Shaftesbury Society earlier this year on the topic “Overcriminalizing The Old North State.” Copland and Gorodetski shared themes from that presentation during a conversation with Mitch Kokai for Carolina Journal Radio. (Click here to find a station near you or to learn about the weekly CJ Radio podcast.)

Kokai: Would people really be surprised to know just how many things are illegal here in North Carolina?

Copland: I think they might. At the federal level, civil libertarian attorney Harvey Silverglate estimated that people commit, on average, three felonies a day under federal law, without knowing it. And we started looking at these state laws. We went to various states — Michigan, Ohio, Illinois, North Carolina — large states. And so we wanted to look at North Carolina more in depth and try to figure out the scope of this problem.

And there really are an enormous volume of crimes. The answer, as it is with the federal government, is we really don’t know for sure how many crimes there are in North Carolina. But the various counts that we look at in our report — the criminal code, the penal code in North Carolina, has 765 sections, which is 38 percent larger than South Carolina’s, 55 percent larger than Virginia’s.

So the state tracks 1,050 crimes, but those are, interestingly, only the crimes that are actually getting charged. That’s what the Administrative Office of the Courts looks at. And, as we found, a lot of these crimes are never getting charged. Isaac, do you want to fill in some of those details?

Gorodetski: Sure. You know, Jeff Welty, who’s a professor at UNC, the School of Government, did a really interesting study. And he tried to capture what’s going on in the criminal law of North Carolina over the past six years. And we did this last year, so it’s 2008 to 2013. And then see how many of these crimes were being charged.

So when we take all of the crimes that were passed in 2009 and 2010 and add them all together, [we] wanted to look at how many times they were charged in 2012 — giving a lag to see, you know, you have to get the crimes on the books, and you have to inform all law enforcement. And Jeff Welty, when he did this, Professor Welty found that two-thirds of those crimes created in 2009 and 2010 were never charged in 2012. And what we have to remember is these crimes are passed under the impetus that these are very necessary to prevent some urgent harm that’s going to, you know, sweep across the state if nobody takes action.

Well, actually, they’re not that necessary if they’re not being charged at all. And only 23 percent of those crimes were charged more than once. So it really calls into question whether or not the crimes that are being created are really that necessary and whether they should actually be criminal.

Kokai: Some people might be listening to us and say, “Well, you know, if something needs to be criminal, make it criminal. What’s the problem with having all of these crimes on the books?” What is the problem?

Copland: Well, the problem really is that what we’re talking about are not the sort of crimes we think about as being criminal. So we’re the last people to want to say we don’t want to prosecute people for assault and rape and murder. And part of what the Manhattan Institute for Policy Research, where we work, has focused its efforts in the last few decades, is on precisely those questions. And it’s precisely for those reasons that the violent crime and property crime rates in New York City have plummeted over the last couple of decades, because of some of the policies we’ve pushed.

Why do we need this? Performing sleep studies without a proper license? And what you end up seeing when you see a lot of these crimes that are actually getting enacted — and in some cases they’re not enacted by the legislature — there are catch-all provisions that delegate criminal lawmaking authority in North Carolina to regulators, and in some cases, private boards of dentists and nutritionists and doctors, that effectively can pass rules that protect them from economic competitors.

So there have been a few cases, a couple of which we focus on in the report, that have gone through the courts in recent years, looking at precisely this. So can the board that looks at nutrition — the Board of Dietetics and Nutrition in North Carolina, which is delegated with authority — can it go after somebody for a weblog posting where he’s just posting on his weblog and saying, you know, “Here’s how I lost weight; here’s how I treated my diabetes.” And they could go after him criminally.

Now, he sued. The Institute for Justice, a libertarian legal shop, helped him file a suit, and ultimately his suit was — the 4th Circuit Court of Appeals said he can file his suit, and the board backed down from its position. So he basically dropped his litigation.
Teeth-whitening kiosks: really interesting public health question, I suppose, in the eyes of the law. That’s because the dental examiners are given the authority to pass rules that have criminal bite in North Carolina, and therefore …

Copland: Exactly. And they can, therefore, go after Wal-Mart or go after any sort of establishment out there that wants to say, “Well, come here and do the teeth-whitening.”

Well, that obviously cuts into the business profits of the dentists. They pass a rule against it. The Supreme Court of the United States ultimately heard this case and in February decided that the Federal Trade Commission was right and that this was not protected. It was actually an antitrust violation.

I’m not sure the court’s decision was right. Justices [Samuel] Alito, [Antonin] Scalia, and [Clarence] Thomas, whom I usually agree with, had, I think, a compelling dissent here. And I think really what the more liberal justices on the court did was kind of rescue North Carolina from its own silly laws.

And what we would argue is that the legislature ought to do its job here and rescue itself from these silly laws because a small-business person shouldn’t be under the threat of going to jail simply for doing a job. And small-business people, it’s important to realize, aren’t like large corporate executives. They don’t have teams of lawyers to advise them on the law, so they can get caught unawares.

Kokai: Now, you mentioned the legislature. And in the brief amount of time we have left, is this really what needs to happen with this report, that people will see just how much has been added to our criminal code and do something to scale it back or at least stop the growth?

Gorodetski: Yes, that’s actually part of the solution. And, you know, the problem quickly is really twofold. It’s one, there are new crimes that are being added at a very high rate — 34 per year in the last six years. And old crimes like the larceny of ginseng and the, you know, temporary taking of horses and mules, that are staying on the books. And so you have this growing code that’s expanding, and nobody could keep track of it.

Now, at the same time, these crimes, these new crimes, don’t have the same traditional elements that are usually protecting individuals, which is something called mens rea. Mens rea is the intent to break the law. And so a lot of these crimes are not specified what intent is necessary to be found guilty of a crime.

So the legislature, in our opinion, needs to do something to make sure that all of these crimes that are being created and those that were created in the past have that intent requirement, and, if not, there’s a backstop that has a default so that people are not caught up unknowingly breaking a law that nobody could really figure out because the books are so large that no one is going to read through them.