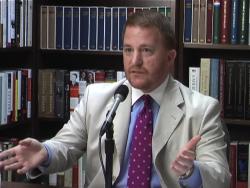 For more than a year, historians and history buffs have been recognizing the 150th anniversary of various battles and other significant events in the Civil War. Much of that Civil War history involves North Carolina. N.C. History Project Director Troy Kickler discussed the topic with Donna Martinez for Carolina Journal Radio. (Click here to find a station near you or to learn about the weekly CJ Radio podcast.)

Martinez: How many men fought from North Carolina in the Civil War?

Martinez: So the impact was not only huge in number but huge in just sheer local impact.

Martinez: What is that?

Kickler: That takes place in the mountains and in eastern North Carolina, where bands of soldiers fight unconventional warfare, with maybe 20, 30 men riding around the countryside trying to hit railroad lines or trying to attack towns or encampments that were sympathetic to the Confederate cause or sympathetic to the Union cause. And a lot of that took place in the mountains of North Carolina. And sometimes, to be frank, it was an excuse for violence. The war was an excuse for violence between — among — families in the mountains.

Then in the eastern part of the state, you had similar types of activity, which they called bushwhacking — bands of Union sympathizers or bands of Confederate sympathizers who would attack each other. So there will not be a battlefield commemorating such wartime activity because it was unconventional warfare for the time.

Martinez: What did North Carolina contribute to the Confederacy? Is there anything in particular our state is known for, in terms of the role that it played during the Civil War?

Martinez: Let’s talk about some of the key military leaders and key battles. When I first moved to North Carolina, one of the things that a friend of mine told me was, “Oh, there’s a lot of incredible history here. You need to go over to Durham. You need to visit a place called Bennett Place.” What is the significance of Bennett Place?

Kickler: That’s probably something I should have mentioned to answer your last question, too. That’s also what North Carolina is known for — the last surrender of a great body of Confederate troops to the Union Army. Bennett Place is where Gen. Joseph Johnston surrendered approximately 23,000 Confederates to Gen. William Sherman. And this took place after the two largest battles that occurred in North Carolina — Averasboro and Bentonville.

So at Bennett Place, Johnston surrendered troops to Sherman, and some historians, like Mark Bradley, have argued that Johnston received better terms of surrender from Sherman than Robert E. Lee did from Grant. And that’s because Johnston had his troops out further westward in the Piedmont area when he went to Durham to talk to Sherman. So Sherman knew that if Johnston didn’t get what he wanted, that Johnston would go back to his troops and they would survive to fight another day. So that was a tactic that Johnston used at Bennett Place in Durham.

Martinez: Now would that happen to be Johnston, the same Johnston that we now know [for] Johnston County? Are they different people?

Martinez: Interesting. Let’s talk about another battle that you hear a lot about if you even skim the surface of the Civil War — Bentonville. Tell me about that.

Kickler: Bentonville was the last major battle in the Carolinas campaign of William Sherman. It occurred March 19-21, 1865. It was on the fields mainly in Johnston County and a little bit in Wayne County, where about 20,000 Confederates fought about 60,000 Federals. And it was after that battle, as we mentioned before, that the Confederate leaders knew that the writing was on the wall, so to speak, and they surrendered to the Union troops about a month later.

Martinez: Did North Carolina produce any great leaders out of the Civil War?

And there are some historians like Frank Lawrence Owsley [who have] said that the Confederacy died because of states’ rights, because of people like Zebulon Vance and Gov. Joe Brown of Georgia, who were resisting Jefferson Davis’s efforts. Then there are other historians who say, no, a different interpretation can be made, and it’s because of centralization that was occurring within the Confederate government, and some of the governors were resisting that centralization. But to answer your question, Zebulon Vance is maybe the most famous political leader of the time.

Martinez: Troy, you obviously are quite a knowledgeable historian on the Civil War. Someone comes to you and says, “Look, give me the Reader’s Digest version. What should I know about North Carolina and the Civil War?” What do you tell them? Are there places they should visit, or are there books that they might read? What do you do?

Kickler: There is a book that was published in the ’60s, and it’s still the best one about the Civil War in North Carolina. That’s the title, The Civil War in North Carolina. It’s written by John G. Barrett. I would recommend that they read that. If you’re interested in visiting battlefields, I would encourage you to visit the Bentonville Battlefield, which is in Johnston County. I would encourage listeners to visit the Averasboro Battlefield, which is in Harnett/Cumberland counties. So those are must-sees. And Bennett Place, of course.