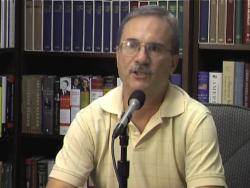 As health care delivery dominates much of our political debate, a North Carolina legislative panel is examining a little-known law that has a major impact on the services available in North Carolina. Roy Cordato, John Locke Foundation vice president for research and resident scholar, discussed the state’s Certificate of Need law with Donna Martinez for Carolina Journal Radio. (Click here to find a station near you or to learn about the weekly CJ Radio podcast.)

Martinez: You have been writing about this issue for literally years now. It’s finally getting scrutiny from the state legislature. You must be cheering.

Cordato: Yes, sure. You know, you have to keep plugging away and finally someone will notice. But, yes, it’s an important issue. It’s a law that’s costing health care consumers in North Carolina lots of money because what it does is [it] restricts competition.

Martinez: What we’re talking about here is referred to as the CON law.

Cordato: That’s right — certificate-of-need laws. What it basically says is that in order to get anything — build a new hospital, but not just to do that, to add beds to an existing hospital, for a doctor’s office to buy a new MRI machine, lots and lots of services — you have to go to the state government. They have to decide if whatever that service is, is “needed.” And they have these formulas to decide. And then if they decide it is needed, then they will grant you permission, which is called a CON or a certificate of need, to build whatever it is or put up whatever it is or to add whatever piece of equipment it is that you want to, to your facility.

Martinez: Why does the state of North Carolina have any interest beyond just general interest, like all of us would have, as to what medical facilities are available and operating in the state?

Cordato: Well, they claim that unless they do that, people will apparently purchase all kinds of unnecessary equipment, build all kinds of unnecessary hospital space, and drive costs up. But, of course, when you think about it, it’s really silly. We don’t do that in any other industry. Imagine if in your local community, a new Chinese restaurant wanted to open up, but before they [could] do it, they had to go to the state government, and the state government had to come in and count how many Chinese restaurants there were in the area to see if there was a “need” for an additional Chinese restaurant in the area.

And not only that, they’d have to see the menu — even the services provided, even within a facility, are under scrutiny — and is it a buffet restaurant or is it an order-from-the-menu restaurant? And then, if the government says, “Oh, OK, well, we need another Chinese restaurant in this town,” then you can get permission from the state to open it.

Well, first of all, what’s that going to do? It restricts competition. It should be the consumers that decide whether a new Chinese restaurant or a new MRI machine is needed, not the state. And of course, with the politics, the interest is always to protect the entrenched interests — the existing Chinese restaurants — from competition. I mean, wouldn’t we all love to be in an industry where every time a competitor wanted to compete with us, they had to go to the government and get permission to do that and someone had to come in and decide whether their service was needed or not? Well, of course, the whole idea of competition is antithesis to that. It’s really a total central planning model, and it governs our health care services in this state.

Cordato: Oh, it absolutely is. It’s a form. Really, though, it’s a form of protectionism — for existing hospitals. I mean, every time a company comes in and they want to build a new hospital, or an existing hospital wants to expand, it becomes a big battle. Why? Because one of the other hospitals in the area says no, that is not needed. Well, if I was their potential competition, I’d say the same thing, you know? If I was an existing Chinese restaurant in the area I’d say, no, no, no, that Chinese restaurant isn’t needed, and I’d go to court, and I’d fight.

And this is what happens every time. The people who want to expand, who want to provide the competition, it costs them hundreds and hundreds of thousands of dollars very often, and with no certainty that they’re ever going to get the certificate of need. I mean, it happens very frequently. A doctor’s office decides it wants to put in a new MRI machine, build a wing to put in an MRI machine in their own facility. It happened a few years ago here, and I believe it was in Cary if my memory serves me right. The doctors’ group that wanted to do this spent hundreds of thousands of dollars fighting to get a certificate of need. Ultimately, they lost.

Martinez: Roy, for years you have been advocating that the certificate-of-need law should be repealed. What would happen to the marketplace for medical services if the law was repealed?

Cordato: It would become more competitive. You would have more health care services. It’s amazing that in a world where people are complaining about the price of health care and the health care costs, and the ability to service the amount of people who need health care services, we have a system that actually restricts supply. And in fact, the whole purpose of it is to restrict supply. I mean that’s what it’s there for. There are plenty of states that don’t have certificate-of-need laws, or had them and repealed [them], and there was no evidence after the repeal that there was excess cost or anything like that. So I would expect more competition, more services available, at lower cost.

Martinez: That’s the part I don’t understand, because it seems to me that the state’s argument is turning economics on its head if you don’t want more supply. Wouldn’t more supply automatically mean that costs would come down?

Cordato: Yes. I mean I think it would. Their view is based on an old model of the way Medicare, actually, used to reimburse for health care services. It was called a cost-plus model. So the incentive — without going into all the details — the incentive was for companies to pad their costs. But that’s not how things are run anymore. And it was originally put in with the thought of saving the government money. But again, that’s not the way it is anymore, and it hasn’t been for a long time. The federal government forced them [the states] to put these things in place originally but then changed their mind. But the states kept them anyway.