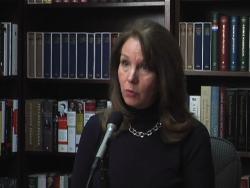 In early May, the North Carolina General Assembly will reconvene in Raleigh for its so-called “short session.” Beyond approving adjustments to the second year of the state’s two-year budget, lawmakers could consider a number of other key issues. Becki Gray, John Locke Foundation vice president for outreach, discussed legislative priorities with Donna Martinez for Carolina Journal Radio. (Click here to find a station near you or to learn about the weekly CJ Radio podcast.)

Martinez: Will legislators be changing the budget decisions they made last year?

Gray: No, I don’t think they will. Generally, what we see — and this is sort of a rule of thumb, if you will — but legislators are elected for a two-year term. During the first [year], they put forth a two-year budget. The short session, which begins in May, is designed to come back and make adjustments to that budget. Not huge changes; we generally don’t see that. Some of it depends on revenue changes. There may be more revenue coming in than they anticipated, budgeted for. There may be less.

Also, sometimes emergencies come up — natural disasters, other things that come up. Medicaid overruns have been sort of a chronic problem that they’ve had to deal with every budget year.

But I don’t see a big divergence from the big budget policies they put into place. Some of the things that they did during the long session: There’s no new debt in this two-year budget. They also put more money aside for savings, to start to replenish some of those savings accounts, the rainy day funds that, over years of poor management, in my view, they had let run down to almost zero. So I don’t think those basic budgetary fiscal principles are going to be changed at all.

Martinez: But there are always pressures for them to come up with more money for particular programs, even new programs.

Martinez: Because the legislature is technically not in session right now — they won’t come back until May, [although] they have been working — is there almost a pent-up demand, so to speak, for folks who are getting ready to go to them and say, “We want you to do this, and, yes, it’s going to cost money”?

Gray: There always are. I think that this General Assembly, this administration, has made it clear that they tend to be very fiscally constrained, very fiscally conservative. So I think that, here in Raleigh, with lobbyists, with special interests, with groups that generally are going to the General Assembly and asking for more and more and more, I think most people know that the answer ahead of time is no, unless there’s really a good reason. So I don’t think we’re going to see a lot of those kinds of demands.

Gray: Education, yes. Those kinds of things. Looking at other things, there’s been a lot of talk about trying to find some money for increasing teacher pay, for increasing state employee pay. [It’s] something else that people are talking about. So when you talk about those budget issues, more money spent, or redirecting money, the only place that I really see that that might happen is with teacher pay and state employee pay.

But, you know, other issues are being looked at, being considered. Some energy policy study committees are going on — very interesting. How aggressive should North Carolina be with energy exploration? Should we continue to subsidize solar energy and some of the renewable energy sources? That’s something that’s getting a good close look.

… Now some of those things will be taken up, will be considered, and some of them won’t. We really anticipate some of them — particularly some very controversial or big, heavy-lifting issues — may be put off until 2015.

Martinez: Now, health care [is] always in the news. Of course, we have the federal Affordable Care Act, commonly known as Obamacare. Part of that law has to do with states making decisions whether or not to expand Medicaid. Here in North Carolina, we chose not to expand it, but, Becki, there’s always pressure to reconsider that.

Gray: Well, there is. The decision whether to expand Medicaid or not is not a one-time decision, yes or no. It’s one that we’ll continue to see pressure from the federal government. Medicaid expansion is one of the key components of Obamacare. As we talk about that — and of course, my colleague Katherine Restrepo has written extensively about Obamacare and the expansion and what that means in the exchanges. But the exchanges and the individual mandate [are] really only part of Obamacare. The other big part of it is the expansion of Medicaid.

It is full of fraud and waste. The outcomes for people that are receiving their health care through Medicaid are not good. So, for a whole variety of reasons, Medicaid expansion is a very bad idea here in North Carolina, and I don’t think that we’re going to see it during the short session, and hopefully not any time.

Martinez: Becki, we know that last time around, last year, legislators also worked pretty extensively on some issues that were put under an umbrella called regulatory reform — a lot of things that have to do with rules businesses have to comply with, things that add to the cost of them doing business. Are you hearing or seeing that they’re going to revisit regulatory issues?

Gray: I think that regulatory issues and regulatory reform and getting regulations, getting government off the backs of businesses, is something that is going to be revisited and revisited and revisited until government is, quite frankly, off the backs of businesses. [Senate leader Phil] Berger has said that. I’ve heard this from legislators. I’ve heard this from the governor. So clearly, that is an ongoing effort.

They have made tremendous strides in this. We’re hearing from the business community and a lot of the assessments of what does 2014 look like, what does the economic recovery look like: Business people cite over and over again the importance of regulation, the importance of getting regulations off the backs of businesses, having some certainty built into the regulatory system, and letting government be an incentive and encouragement to business, not an impediment to business.

So, with periodic review of the rules, with some cost-benefit analysis being put into this, there’s some real movement forward. But we hear every day — and I know that the General Assembly and the governor [are] hearing the same thing — we hear different examples from different businesses. “You know, here’s a rule that has prohibited me from expanding my business.” So we’re going to continue to look at this.

There are thousands and thousands of rules that are in place in North Carolina. We’re going to start looking at those now. There [are] going to be sunsets associated with new rules. So it’s a whole different regulatory framework, if you will, a real different way of looking at it. And yes, Donna, this is not a one-time fix; this is something that will continue as long as the conservative Republicans are in charge in North Carolina.

Martinez: You mentioned Senate leader Phil Berger out of Rockingham County. He recently received a national award from the Tax Foundation for what they determined was his leadership role in the reform of North Carolina’s tax system. Why was that reform so important? And are they going to be doing some other things?

Gray: I think they will continue to do things. The John Locke Foundation is going to be taking a very close look [at] the impact of the tax reform on different classes of taxpayers and what that really means to North Carolina families, to North Carolina businesses. So you’re going to be hearing more and more about this.

Again, in analysis that we’ve seen of economic recovery forecasting, what does the economic situation look like here in North Carolina, one of the things that you’ve heard touted over and over again is the tax reform that is fair, simple, and again, getting government off the backs of individuals in North Carolina. And, as you mentioned, Sen. Berger has received awards. There have been national columnists and opinion writers, economists, and all kinds of people that have praised North Carolina and the tax reform efforts that they have made.