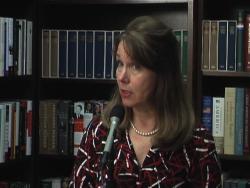 The full N.C. General Assembly returns to work in May. In the meantime, many legislators are busy working on oversight and study committees, including roughly 20 new groups set up since the end of the long legislative session last summer. Becki Gray, John Locke Foundation vice president for outreach, discussed the work of these new study committees with Donna Martinez for Carolina Journal Radio. (Click here to find a station near you or to learn about the weekly CJ Radio podcast.)

Martinez: How and why do issues get put into a study committee?

Gray: Well, it’s a variety of reasons, Donna. Often during the legislative session there may be issues that come up, there may be policies that come up, that are questionable, that just require more of an in-depth study — maybe things that they didn’t get to during the long session, maybe something they’re just not sure if they want to pursue [and] they want more information on it. And then, to be honest with you, sometimes a study committee is set up just to sort of pacify a particular legislator or group of legislators. So there’s a variety of reasons.

Now usually what we see, just procedurally, is usually the General Assembly has a study bill at the end of the session that they will put together. Both the House and the Senate pass those, and it sets up the committees that they’re going to look at during the interim. [Last] year they did it a little bit different. They set this up through the Legislative Research Commission and set up these 20 committees. We get to the same place that we would have with a bill, but just a little bit different procedure, which is a little bit interesting. New leadership, different way of organizing things — just sort of a side note on that.

Martinez: Just because these 20 particular committees have been set up, that does not mean that there’s going to be legislative action on all of these.

Sometimes in the past, what we’d seen is a piece of legislation coming out of a study committee, that once it goes through the regular committee process and vetting and suggestions of the entire membership of the General Assembly, you see that change a lot. So it’s a starting point. It also gives us a clue — those of us that are in this policy business, that are really watching these things — it gives us a clue of the priorities, what they may be looking at going forward. One thing that I noticed right off the bat is, of these 20 committees, eight of them, only eight of them, have members from both the House and the Senate.

Martinez: So that tells you there’s interest on both sides.

Gray: Right. That says to me that there’s interest on both sides. So those are the ones that I’ve sort of moved up on our priority list of keeping an eye on. The others, the remaining, are only House members, so they would have to conduct their study and then generate some interest from the Senate side as well.

Martinez: Let’s talk about some of these because several of them actually coincide with priorities for the Locke Foundation in terms of the policy issues in question.

Gray: What they’re really talking about — and specifically it says in the charge to the committee — that they’re going to be looking at certificate-of-need regulations in North Carolina, something that actually my colleague [JLF Director of Regulatory Studies] Jon Sanders has just written a paper [about]. I believe you’ve talked to him about that.

Gray: Certificate-of-need regulations are only in a handful of states. North Carolina is one of those. And what we’ve seen with it is that it drives up health care cost and limits access. So it’s something that we have long advocated for, and most recently, Jon has written this paper explaining that. So we were very happy to see a study, legislative study, on certificate of need. Do we need this in North Carolina? Is there a chance that it may be repealed? And that’s certainly something that we would advocate.

Martinez: You know what’s interesting is that it is named market-based solutions. That in itself tells you the philosophy that is coming out of this new General Assembly.

Martinez: Let’s turn to education because there’s also a committee based on Common Core. Now that, of course, is a very controversial issue in the education world. The Locke Foundation has been analyzing that quite frequently. What is at issue there?

Gray: Well, it’s whether or not we should adopt the Common Core standards, what the costs are going to be. My colleague [JLF Director of Research and Education Studies] Terry Stoops has done a wonderful Spotlight report on Common Core: “60 Questions About Common Core.” And basically the charge to the committee is looking at many of those questions that Dr. Stoops has raised in his paper.

Gray: Costs. Implementation. Are these standards as high as we want them to be in North Carolina? Even if we adopted the Common Core standards, should we be limited to that, or should we strive to have the very highest standards in the entire country? And Dr. Stoops’ opinion, and those of us at the Locke Foundation, is that we should not be restrained by these Common Core standards.

There are also some concerns with privacy issues, with data mining with students through our public education system. That is another issue that they’re going to be looking at with the Common Core standards. And again, this is something that we’ve written about and have been advocates for. Again, another Locke Foundation issue that is being studied.

Martinez: In fact, it’s also an issue that Lt. Gov. Dan Forest has been talking about quite a lot as he speaks around the state. The question of cost — it should be a very positive development that they’re going to be looking at cost issues because, after all, those very same legislators are going to be putting together budgets and having to vote on those. There could be some very important information there for them.

Gray: Right. I think the biggest concern about this, just sort of in a nutshell, is that this is a mandate from the federal government, and it has to do with the testing and the cost of the testing and the technology that’s required in order to implement these tests. And there’s some real concerns about this. If we implement this, what is it going to cost us here in North Carolina? Is there a cost benefit to us, and how are we going to pay for it?

And again, yes, this feeds directly into budgeting; [there was] a lot of talk last session and this session about those education dollars in North Carolina. Even though the General Assembly increased funding for public education, there’s still a concern that every one of those education dollars [goes] to educating our students and getting the best results that we can. And will this huge increase in expenses for the Common Core testing be the best use of our dollars here in North Carolina?

Martinez: Now another policy area of great concern to the Locke Foundation is property rights. There’s a study committee about that as well.

Gray: Right. And this would basically put into place a property owners’ protection act that has to do with, if you have to defend a lawsuit, if your land is condemned by the government and you had to defend a lawsuit, who would have to pay those lawyers? Those kinds of things are put into place. It’s almost an extension — as I read the charge to the committee — it’s almost an extension of what we’ve seen with annexation laws, annexation reform, property rights reform, that we’ve seen over the last several years in the General Assembly. So, a continuation of those.

And then, Donna, another one related to health care that we didn’t touch on, another study that has to do with scope of practice and the supply of physicians and health care providers that we have in North Carolina. Again, another Locke Foundation issue on scope of practice and how we can expand access to medical care by perhaps breaking down some of the barriers for nurse practitioners, for physicians’ assistants, dental hygienists, those kinds of things. So that’s another area that they’re going to be looking at.

And then also they’re going to be looking at some environmental issues. The Jordan Lake rules [committee] is one that is a joint committee with the House and the Senate, and then some others that just the House is going to be looking at. Again, we’ve written about this a lot at the Locke Foundation. Regulations, environmental regulations — what is that doing to development? What is that doing to economic development across North Carolina?