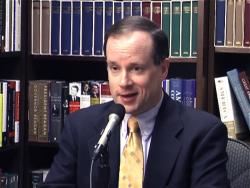 She opted not to run for re-election, but Gov. Beverly Perdue has not let her “lame-duck” status stop her from traveling across the state, sharing her goals for her final year in office, and picking occasional fights with the Republican-led General Assembly. John Locke Foundation President John Hood discussed Perdue recently with Donna Martinez for Carolina Journal Radio. (Click here to find a station near you or to learn about the weekly CJ Radio podcast.)

Martinez: The governor is not backing off at all. In fact, when it comes to education in particular, she seems to have ramped up her comments.

Hood: She has. It’s sort of an odd situation to be in. I think that Gov. Perdue was absolutely right when she and her advisers concluded that she was a net detriment to the Democratic Party’s chances of holding the governor’s mansion after 2012. So she decided not to run again. That was a sign of good, wise decision making — something that had not been evident ahead of that decision and, unfortunately for her, has not been evident since then.

Now, if you are a detriment to your party’s chances of holding the governor’s office, it’s probably because you’re not a very good messenger for the party’s message, or a very good politician in manipulating the levers of public opinion to your advantage. She isn’t. She isn’t really good at either one of those things. And what has she been doing since the announcement of her retirement from politics? She has been trying to articulate the message of her party in a very public fashion and trying to pull the levers of politics to improve her party’s chances in the fall. And neither is working very well.

Martinez: She is, however, receiving a lot of media attention for the things that she has said, and she has been engaging a number of advocacy groups, and there has been a lot of back and forth. Does that mean she is achieving her goal?

Hood: Well, if her goal is to make herself look a little silly, then she is succeeding. Media coverage is not her goal, presumably. It’s positive coverage or coverage that drives her message rather than her opponents’ message. She had something to say. The Republicans had passed a budget over her veto, and it is absolutely true that after that budget was implemented, there were some reductions in state employment, including among the ranks of teachers — not very many, but there were some.

Now, some organizations that favored the Republican budget came and said that the number of state-funded positions in the teaching force in the public schools had actually gone up, which is technically true. But one might argue, yes, that’s only true if you don’t include the effect on the local governments and the loss of federal funds, and the ultimate conclusion was a slight reduction in teachers. That would have been a reasonable point to make. She might have scored some points. Instead, she proceeded to make the rather ridiculous claim that the Republican budget represented the least amount of tax dollars spent on education in history, which had the deficiency of being obviously incorrect and such a ridiculously over-the-top claim that it was destined to be the lead of all the subsequent stories.

And much of the subsequent coverage would be about her claim, which was never defensible, instead of the Republican claim, which was arguably defensible. So even when she or her party has something to say that might persuade somebody, she is the very worst person to try to make the argument. And I think this episode exemplified it, and instead of learning from it, she just went off and kept making speeches. I just think the Democrats trying to get back in the game have got to be cringing, that things that they wish somebody would say effectively from their perspective are instead being said by Gov. Perdue, not effectively.

Martinez: She has long been advocating for an increase in the sales tax rate. She says that’s what’s needed in order to properly fund education, in her view. That ended up with leaders in the Republican-led General Assembly saying, “Let’s debate this.” Is that likely to happen?

Hood: The Democrats want to frame the fiscal debate in North Carolina, which is really the top political issue — the economy and what is the state government doing about it — they want to frame this as, the way to make North Carolina grow faster and be more prosperous is to spend more money on education, and the Republicans won’t do that because of their dogged insistence on keeping taxes level. Again, I don’t think that argument will necessarily win, but at least it has the virtue of, there is some support for that sentiment among people who are not already either Democrats or Republicans. They might be led to believe that if we just spent a little more money on education, even if it means a tax increase, that would be good.

The problem is that Gov. Perdue can’t make this argument very well, and the Republicans have responses that are equally, if not more persuasive, about how taxes affect economic decisions, and the amount of money we’re talking about in education is trivial — it’s less than 1 percent difference between the two plans. And so they have something to say. And furthermore, they said, “OK, Gov. Perdue, you want to mix this up, let’s have a debate about it.” At which point, she runs away. This is, again, not an exchange that helps her side. … And so it’s an example of Gov. Perdue, having done the right thing and stepping out of the race because she didn’t really have a chance of winning, now staying in the political game in a way that is hurting her party.

Martinez: Recently, John, Gov. Perdue also made an announcement about energy development policy. She came out and said, “I think we can engage in the process known as fracking.” Does that help or hurt the Democratic Party?

Hood: I think that helps Democrats. Now that was a good example of Perdue helping her party by trying to steer the party’s position a little bit, and then if the left is mad — and the left of the Democratic Party is very mad about this; they don’t like fracking at all — well, they can blame the outgoing governor, and who cares? So she’s doing something that gives other Democrats a chance to sort of live under her shadow and say, “Well, you know, different people have different views. I notice the Perdue administration thinks we should study this, and I think that’s reasonable.”

In other words, you give the left somebody to complain about, the outgoing governor, and it gives Democrats a chance, going forward, to maybe win some voters who really do want energy sources in North Carolina to be explored. Most voters do want that. I think the governor, in that case, was positioning her party well. But on the tax issue, she positioned very poorly.

Martinez: You mentioned that the governor bowed out of re-election; she had notoriously low poll ratings. Did the White House have anything to do with that?

Hood: I doubt very seriously whether the Obama administration had anything to do with it. There have been allegations or rumors to that effect. I don’t see any clear evidence of that, at least not yet. I do think that it was in the interest of the Obama administration, running for re-election, trying to win North Carolina, that there be a stronger candidate for governor than Perdue. But it’s not a big issue. It’s most likely to be the case that the presidential race will affect the governor’s race, rather than the governor’s race affecting the presidential race, if you see what I mean.

I don’t think that many people will vote for Obama because there is a stronger gubernatorial candidate at the top of the Democratic ticket. But, on balance, you’d rather have a ticket all the way down the ballot that you can stand behind and be comfortable with, so I see that. I doubt very seriously it was a straight political calculation. Now, there have been some rumors to the effect that maybe Gov. Perdue heard there might be some legal jeopardy for herself or family members or something, and maybe that will be the reason not to run for re-election and be a bigger target. That might involve some federal officials, but you see, in that case, it wouldn’t be so much about politics as it would be about her own future.

Martinez: John, do you anticipate that Gov. Perdue is going to continue to speak out all the way through the very end of her term?

Hood: I don’t think anybody in the Democratic Party has bluntly told her to be quiet. And I think that if they tried to do so, it probably wouldn’t work. So I think Gov. Perdue is going to keep trying to sell her message, trying to go out on a win, rhetorically. And I think, unfortunately for her, she is just not likely to prevail on that.