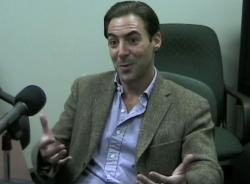 With all of their gambling, drinking, fighting, and thieving, pirates still had time to make rational economic calculations. Dr. Peter Leeson, BB&T professor of the study of capitalism at George Mason University, makes that argument in his book The Invisible Hook: The Hidden Economics of Pirates. While at Campbell University recently to speak with students, Leeson discussed key themes from the book with Mitch Kokai for Carolina Journal Radio. (Head to http://www.carolinajournal.com/cjradio/ to find a station near you or to learn about the weekly CJ Radio podcast.)

Kokai: Why study the economics of pirates?

Leeson: There are several reasons. The first reason I think why we want to study the economics of piracy is that pirates were economic actors. They were ultimately businessmen. They were criminal businessmen, which led to some rather unusual features of the kind of piratical enterprise, as it were. But it was a business nonetheless. They were interested in maximizing profits. And so for the same reason that we’d want to look at a legitimate firm in terms of economics, we would also want to look at a pirate “firm,” if you will, in terms of economics.

The other reason I think that we want to think about pirates economically is that pirates are known for having engaged in some rather unusual practices — flying the pirate flag, the Jolly Roger; torture, for example. And as some people know, pirates had what’s commonly called a “pirate’s code,” a kind of system of constitutional democracy, in fact. And in order to get a handle on why it is that pirates might have engaged in these unexpected practices, the economic way of thinking, or the rational choice theory as we call it, provides us some insight into those questions.

Leeson: They were certainly thinking in terms of increasing their bottom line. People got into piracy out of legitimate merchant marine activities and into piracy in large part because piracy offered the prospect for higher incomes. So in that sense they were certainly thinking in dollars-and-cents terms. Having said that, it’s rather unlikely that pirates had in their mind the kind of framework, the economic theories that an academic economist would bring to studying them playing in the back of their mind as they were engaged in these activities. So in that sense pirates were very much like everybody else. Most people, a random person you talk to on the street, doesn’t have the perfectly competitive model in the back of their mind. And nonetheless, economists think that model is probably a good way of describing certain types of economic activities, including economic activities that those individuals are engaged in.

Kokai: What’s the most important thing we should know about how pirates acted economically?

Leeson: I think the most important takeaway from the economics of piracy is the idea of self-governance. It’s common to think about social rules, some system of law and order, as only being capable of being provided by a state, by a government, a monopoly on the use of force. And pirates give us pause to rethink that conventional wisdom, because pirates as outlaws, of course, couldn’t rely on the formal apparatuses provided by the state as a way to produce social order among them. And yet if you think about it, just for a few seconds, it’s pretty obvious that in order to be successful in their pirating enterprises, in order to work together on their ships, for example, pirates had to produce some means of law and order themselves. They needed to provide some kind of governance. And the way that they did that was through a kind of system of private institutions which were voluntarily adopted and adhered to by pirates, quite independent of any monopoly on force like the government.

Kokai: Members of our audience are probably saying, “Wait a minute. You’re telling me pirates, a bunch of drunken, crazy thieves, actually lived by rules? Amazing.”

Leeson: Yeah, it’s really largely what attracted me to the economics of piracy, to pirates in general, and it is quite remarkable. It’s not only that they had rules, they had very specific, detailed rules — rules that were surprisingly, at least for pirates anyway, rather puritanical. For example, it appears to be the case that on some pirate ships at least, drinking was quite restricted. Bedtimes were restricted; they had an early bedtime of 8 o’clock on one ship. Gambling was prohibited. Allowing women [was] prohibited on pirate ships.

It makes us wonder why would pirates, these supposedly debauched and raucous fellows, who are criminals at that, why is it that they would adopt those kind of rules? And the answer, in a nutshell, is that those kinds of rules are necessary to provide the social order on a pirate ship required for the pirates to make any money. If the ship degenerated into fights constantly because of gambling conflicts, for example, or fights over women, if pirates didn’t have strict rules that regulated their alcohol intake such that they were drunk all the time, if there weren’t laws that regulated theft and violence among pirates, then pirate ships would devolve into a kind of a Hobbesian jungle, a sort of Lord of the Flies scenario, and that is not good for the bottom line. Nobody makes money when that happens because the pirate firm gets torn apart.

Kokai: So is our mental image of the crazy pirate ship wrong?

Leeson: Well, in some ways, the image that we have of a pirate ship is right, you know. The way that they’re depicted in movies is roughly accurate in the sense of what an early 18th-century merchant ship would look like in many cases, which is what pirates were sailing. They simply stole the vessels that they used to pirate with. But in terms of the kind of ambience that existed on a pirate ship, I think there’s a good deal more entertaining aspects to what happens in the movies than probably prevailed on a pirate ship.

It certainly seems to be the case that a pirate ship had much more order, much more law and order, than is depicted in the movies. Well, that’s not saying a lot because in the movies, pirates are necessarily depicted as … anarchic, devil-may-care fellows. And there’s reason for that image of pirates. Incidentally, pirates played no small part in contributing to an image of themselves, a kind of devil-may-care attitude, because that also actually helped them to make money. We can use economics to understand that choice as well. But there was a surprising degree of order on pirate ships.

Kokai: I understand that you believe Blackbeard was a great marketer.

Leeson: The first thing to note about Blackbeard is that among pirates he’s one about whom we’d like to know much more than we do. Pirate historians — or historians of piracy, I should say — are not even certain about what his real name was, although the kind of conventional wisdom is that his real name was Edward Teach. And what you’re referring to is the fact, I think, that Blackbeard, it appears, actually never killed anybody himself. And the reason that he didn’t have to makes sense from an economic perspective, because he, as you noted, invested in creating a terrible reputation, a reputation as someone who shouldn’t be trifled with.

And one of the ways he did that, which is in fact what led to him having the name Blackbeard, was to grow his beard extremely long. He allegedly put cannon fuses under his hat and then lit them to kind of create a hellish fury-type effect. He carried two crossed pistols with bandoliers — bandoliers with pistols in them — across his chest. Also, for an early 18th-century man, he was unusually tall. I think that he was perhaps over 6 feet tall. So he cut a rather gruesome image, certainly not the kind of person you wouldn’t want to acquiesce to if he asked you for something that you had. And that likely led to the fact that he didn’t actually have to use force to get what he wanted, in many cases. He could simply ask.

Kokai: This idea of marketing sounds like something we could learn from pirates.

Leeson: Firms invest in reputations, you know. When you buy a Mercedes Benz, you’re not just buying the steel and the leather and the materials that go into the car; you’re buying a reputation, and that contributes to the ability of Mercedes Benz to command a premium in the marketplace. So firms engage in this activity. They understand it. But for fledgling firms I think it’s especially important to think about, long run, how it is that you might go about investing in a reputation that will ultimately promote your profit.

We can also think about, closely related, the idea of developing logos, memorable logos. Pirates’ logo is perhaps the greatest logo of all time. The skull with crossbones beneath it graces products from tater tots to T-shirts today, nearly 300 years after these guys left the world. That’s a pretty remarkable thing, and it points to the power of an important logo, which helps to brand you, helps to communicate something about your identity to your customers or, in the pirates’ case, your victims.

categories: Books and the Arts

The festivals are silent, but we may now need music more than ever

CJ politics week in review, May 4-8

Put politics aside and focus on the science of reading