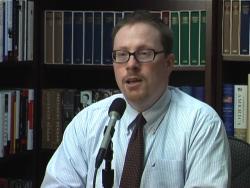 The annual teacher turnover report produced by the N.C. Department of Public Instruction shows the number of public schoolteachers who’ve left their jobs across the state during the past year. The latest report sparked a lot of media interest, but Dr. Terry Stoops, director of research and education studies for the John Locke Foundation, says the report does not necessarily say what some critics of the Republican-led General Assembly think it says. Stoops discussed the issue with Donna Martinez for Carolina Journal Radio. (Click here to find a station near you or to learn about the weekly CJ Radio podcast.)

Martinez: What are the data in this report? What does it say?

Stoops: Well, the data show that around 14 percent, or 13,000 teachers, left their teaching position last year. This is the 2012-13 school year. And I say “leave their position” because some of these teachers just went to go teach in other school districts or in charter schools. Others retired. So this doesn’t represent the turnover as it’s traditionally understood by a lot of people — someone leaving the profession completely. These are mostly teachers that left the profession or retired.

Martinez: So, for example, a teacher could have been teaching in Durham County and decided that they got a better offer over in Buncombe County, and off they went. That person goes into this report?

Martinez: Here’s where it gets really, really interesting. And we’ll get back to the policy questions in a moment. But when this report was released … there were a number of media stories and advocacy groups who came out and said, “Now, see? People are leaving the profession because of all the things that the legislators have passed.” [Reforms] that these groups consider to be anti-teacher. That got a reaction from you. Tell us about it.

Stoops: It really misrepresents what the report is saying. Well, first of all, if you look at the reasons why teachers left, and if you chalk it up to teachers leaving the state or being dissatisfied with the profession, that amounts to about 1,300 teachers; 1,300 of the 13,000 that left their position did so because of, either they wanted to teach out of state — and that’s not necessarily because of the policies of the Republicans; it’s just that they found a job in another state — or they were dissatisfied with teaching. And, again, that dissatisfaction may be caused by any number of factors in their current teaching position.

But to make the causal jump — the leap — that just because these teachers are leaving the profession or leaving to teach out of state, it’s because of Republican policies — the report just does not support that conclusion. We don’t have the information. We can’t get into each of the teacher’s heads and figure out exactly why they’re leaving. So what the media did — and what a lot of the groups on the Left did — is to attribute these teachers that left the profession permanently, attribute that to Republican policies. And there’s just no evidence that that’s the case.

Martinez: The numbers that were released in December also got your attention — just the numbers themselves — because there had been a previous report that had different numbers in it. What went on there?

Stoops: The report originally was released in November. And whenever it comes out, of course, I discuss the figures before the State Board of Education meeting because the board takes the report, looks at it, talks about it, and votes on it. And so I get hold of the report about a week before the board meeting. So I looked at the report and I started reporting on some of the numbers. And Dan Way of Carolina Journal also reported on what the numbers showed. And compared to the December reports, the November report actually showed a much smaller turnover.

But strangely enough, that report was pulled shortly before the State Board of Education meeting because of what some DPI official said were inaccuracies in the data. It was reissued a month later showing a much higher turnover [rate], so some strange things going on there between November and December. A report that was pulled, fundamentally changed, and reissued basically to show a result that was more favorable to the Democrats.

Martinez: The numbers themselves: Are you surprised by the number of teachers who are transferring or leaving the state? Or is this just the normal course of business?

Stoops: This is normal course of business. This is consistent with what we see every year. … Teachers, for example, every year leave North Carolina to teach in another state. This happens every year regardless of who’s in charge. Moreover, if you look at the trends in teacher turnover, we’re at about 14 percent right now. We were at about 14 percent five years ago. And then, five years before that, we were at around 14 percent.

Martinez: It sounds like what happens in any industry.

Martinez: There are cycles — good ones and bad ones.

Stoops: That’s right. And if you look at some of the turnover rates in other industries in the private sector, for example, you find it around 17 percent. In other areas of education, in other states, [it’s] as high as 15 or 16 percent. So there’s nothing unusual about the turnover rate that we have in North Carolina. And when you look at just the teachers who left the profession — what we traditionally consider turnover — it’s much lower than the 14 percent that’s reported by the state.

Martinez: In previous years, then, when we saw the same level of transfers and leaving the profession, was there media coverage?

And so here we are, a few years later, and suddenly we have a press release again on the teacher turnover report, this time showing that the figure increased from a year before. So this isn’t — this is highly irregular for the Department of Public Instruction to issue some sort of press release or statement about the teacher turnover report. And it’s clear they’re doing so for partisan purposes, not because they want everyone to know this data was released — because if they did, if that was their reason for doing so, they would do it every year.

Report: N.C. school choice programs save taxpayers up to $154.3 million

Survey: More than half of parents explored alternative school options during pandemic