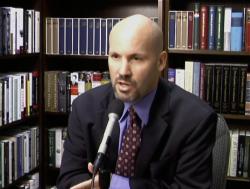 The debate about the proper balance between free markets and government economic intervention has reached a crossroads. That’s the opinion of Dr. Peter Frank, Free Enterprise Fellow in the Jesse Helms Center Fellows Program and director of Wingate University’s BB&T Program on the Moral Foundations of Free Enterprise. Frank recently discussed that topic with the John Locke Foundation’s Shaftesbury Society and in a follow-up interview with Mitch Kokai for Carolina Journal Radio. (Click here to find a station near you or to learn about the weekly CJ Radio podcast.)

Kokai: A crossroads between the markets and government. Why do you feel that we’re at a crossroads?

Frank: I feel like in the past three years, based on the financial crisis that’s occurred and all the different events that have happened based on the interaction between markets and government, that we’ve reached a point where we’re not just running down two parallel streams, where some view markets as a proper place, but you need government to kind of help manage and move them. I feel like we’ve reached a point, for lots of reasons, that it’s coming to a head — where we’re going to have to see widespread decision making that sets us on a new course.

Kokai: What about the recent events and what we’ve seen in the course of the financial crisis makes you think that we’re at this sort of stark point now?

Frank: I think it’s two reasons. No. 1, we’ve seen that there’s a fundamental misunderstanding of what it means — what the market process is and what markets are, what they do. And the second, I think, is actually a positive reason. I think people are starting to realize that the inevitable outcome of government in general — not just economic policy, but government in general — is massive overspending, huge deficits, and public debt. The inevitable outcome of that [is] we don’t really have a good model to know where that’s going to lead us, short of looking at cases like Greece and other European countries that have gone bankrupt.

Kokai: Economists have been debating these issues for decades, maybe centuries. Public policy wonks are interested in them. Do you get the sense that normal, everyday folks who don’t follow politics as much are also getting interested in this topic?

Frank: Yes. I think that’s part of the crux of my position — that this is no longer a debate that’s just happening on the op-ed pages of newspapers or in the halls of Congress, but everyday Americans are starting to realize that they need to get a better handle and understanding on what’s going on in government because the spending and the debt that’s being run up is [in] remarkable proportions. People are starting to get a sense that, “I can’t live my life this way, outspending my income on a regular basis by severalfold, and how can the government sustain that path?”

Frank: Well, I think the inevitable end of that path is not fully understood, even by economists. I mean, there’s a lot of debate on what’s going to happen when debt reaches over 100 percent of our output on an annual basis. What’s that going to do to the backs of future generations? But I think what it means is a lot less decision making by individuals in how they choose to control their lives in terms of basic spending on goods and services — everything from that to, obviously, health care and this massive debate that’s been happening over the last couple of years with the new health care plan.

So I think the inevitable path is somewhat unknown, but I think what it means is individual decision making is going to be restricted, and more dollars are going to have to be confiscated from individuals in order to maintain the programs and the spending that the government wants to do at this time.

Kokai: We discussed one path. The other path, I would suspect, deals with allowing markets to work. What happens if we do this?

Frank: Well, I think, first off, one of my points is that there’s been a real failure in the economics profession in order to bring young people up to speed on the tools of what markets really are and what markets really do. And markets are a process. In my remarks I speak to this, that it’s not just one thing in terms of a government entity versus some mystical market entity. But markets are a process that coordinates the decision making of millions — and in the world context, billions — of individuals in terms of how resources can be allocated.

And I think if we take the path that leads us down what I believe is the right road, it will be a more proper understanding that government policy should be driven by incentives that encourage markets to function properly as opposed to policy that restricts the will and the decision making of individuals. And I think it’s broader than simply, you know, one policy versus another, but it’s really a crossroads that says the market process is not just a nice way to organize the economy and make some people feel good, but it’s the only fair, just, and efficient way to allocate resources, broadly speaking.

Kokai: Do you get a sense that many people really understand that? Or is this something that, as you mentioned before, the economics profession really needs to step up to the plate to do?

Frank: Right. I think that it’s not a concept that’s beyond the understanding of individuals. I don’t think you need a degree in economics. But I think it’s something that, I argue, people don’t have a good understanding of the market as a process, and that’s why this BB&T program that you mentioned that I’m a part of is really designed to help people get the tools [so] that they can apprehend and understand what markets really are, what markets really do, as opposed to just allowing the kind of positivist — many people refer to a revolution in economics, where we’re all just dealing with mathematical models that only Ph.D.’s in economics can understand. That’s not really what economics is all about at its core.

Frank: Well, I’m hopeful that through the program that I’m running, and others like it at many institutions, and also through the Jesse Helms Center — we have a program that reaches high school students — I’m hopeful through programs like this that young people will start to understand the choices that they need to make in terms of their role in government, their role in the market, will help to lead us down the right path. I’m optimistic that that’s the outcome that’s going to occur once people get these tools that I’m talking about in terms of the fundamentals of economic decision making.

Kokai: You mentioned the Helms Center program, which is the Free Enterprise [Leadership] Challenge. Have people at the Helms Center seen from the past experience with this challenge that people coming out of the program have the light bulbs going off over their heads that, “Oh, yes, markets do work, and we should allow them to work”?

Frank: I think so. I mean, I think part of the evidence is the number of people that want to be involved in the program after they’ve been through it, after they get into college. There’s a lot of interest in helping out and then expanding the program. This year, this summer, the program has expanded to a university — Houston Baptist in Texas. They have a wait list right now for that program, just because of the reputation, and there are several other universities that are being looked at to expand this Free Enterprise Leadership Challenge. So I think they’ve seen students go on to really participate in a way that I think they’ve chosen the right point in the crossroads debate.