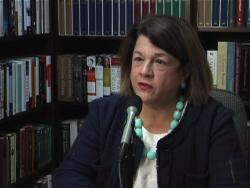 Advocates for reform of the way North Carolina draws its congressional and legislative election maps are taking their arguments to audiences across North Carolina. Redistricting reformers have conducted public meetings recently in Greensboro, Fayetteville, and Charlotte, with other events scheduled in the weeks ahead. Jane Pinsky, executive director of the N.C. Coalition for Lobbying and Government Reform, discussed redistricting issues with Mitch Kokai for Carolina Journal Radio. (Click here to find a station near you or to learn about the weekly CJ Radio podcast.)

Pinsky: We mean taking the politics out of redistricting and making it a process that works for the citizens of the state and not for the political interests in the state.

Kokai: For folks who have been following this issue, they saw that this three-judge panel said [in July] the election maps were fine. They can move forward. You saw this ruling and said, “Hey, you know, this doesn’t do anything about addressing the real problem of redistricting reform.”

Pinsky: The very beginning of the ruling talks about the fact that the maps were drawn by the party in power for political influence, and to maintain their power. And that is something that, whichever party has been in power in North Carolina — and I will say this is the first time the Republican Party has had a shot at redistricting for over 100 years — whichever party has been in power has used it to maintain their political sway, to maintain their political influence, and to elect specific legislators in specific areas. So they’ve drawn districts so that they play to the best advantage of the party in power.

Kokai: This is the most recent ruling, but at the federal level, we also saw the U.S. Supreme Court talk about the future of the Voting Rights Act. When you saw what the Supreme Court had to say, how did that affect redistricting efforts here?

Pinsky: The people who do redistricting — the legislators and the staff — will tell you that, in the past, in order to draw the districts, the first thing they have to do is draw districts that follow the guidelines of the Voting Rights Act, and then everything else is sort of like a domino from there on. Without a requirement to follow the guidelines and get preclearance from the U.S. Justice Department, which is what the Voting Rights Act required, it means that we can, indeed, have a moment where we can really change the way North Carolina does redistricting.

The court said that the principle was right, that we should avoid discrimination, and they said that if Congress wanted to find a better way to decide where they should be putting their attention, then Section 5 of the Voting Rights Act, the part that we have to have approval for, could stand. But most of us think it’s pretty unlikely that Congress is going to take any action for quite a while.

Pinsky: Right. This legislation, which is House Bill 606, is based on a system that the state of Iowa has used for four redistricting cycles. And I have to say the first place I learned about it was in Carolina Journal, in an article in 2004 written by Paul Chesser. And the system is a staff-driven, and data-driven, criteria-driven one. So it requires that nonpartisan staff draw the districts based on geography and population, that the districts be compact — i.e., as small as possible — that all parts of the district touch, they be contiguous, and that we follow state and federal law.

It says the people drawing the maps can’t look at political registration. They can’t look at results from past elections. They cannot look at where incumbents or challengers live. And anybody who sat through redistricting last time sat through the sessions where somebody said, “You need to move this line because my Aunt Sarah wants to be in my district, and she’s three blocks away.” And we think Aunt Sarah is a really nice person, but we shouldn’t be drawing maps just to accommodate her.

Kokai: Now, redistricting is inherently a political process. Politics is going to play a role. But why do you think this particular system takes politics as much out as it can be [taken]?

Pinsky: It does it because, quite literally, we take our staff — and in Iowa they use a geographer, a demographer, and an attorney — they literally sequester them in an office building in downtown Des Moines, and no one knows where they are. And they draw the maps by using computers to put together blocks of population as compactly as possible. They don’t draw districts to give a political advantage to one party or the other or to one person or the other. And the gentleman who was the geographer in Iowa the last time said quite literally he had no idea what districts current members sat in.

And as a result, of the 150 members of the Iowa General Assembly, 37 of them were double-bunked. That means that two current members were in the same district. And yet all of those people voted for the maps because they believed they were done fairly. So we think this, as much as possible, takes politics out of the process. Elections are political, so it’s never going to be completely apolitical, but we think this does a good job of it.

Kokai: Now, in the past, Democrats had large majorities in the General Assembly. Now, Republicans have supermajorities in both the House and Senate.

Kokai: Some of them are going to say, “Well, why should we change the system? We like the way it’s operating now.” Why should the Republicans who are in charge now go along with this idea?

I think the other thing is that we are a rapidly changing state, and neither party knows who’s really going to be in control, even in 2021 when this legislation would take effect. So that it’s an insurance policy for both sides to know that the process is not going to be politically driven or political revenge-driven.

Kokai: Do you think something in redistricting reform is going to happen, if not this year, sometime soon?

Pinsky: The North Carolina House passed the same bill in 2011. And the North Carolina Senate refused to take it up. … It is one of the few bills on which [House] Speaker [Thom] Tillis took a roll call vote and voted for it. He was sponsor of the same legislation in the past, and [House] Speaker Pro Tem Skip Stam first introduced this legislation in 1989. So we think two of the leaders have a long-term commitment to making this change, and we’re hoping that they will move the legislation.