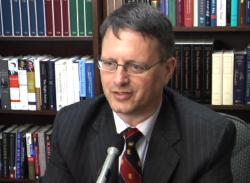 Andrew Morriss, H. Ross and Helen Workman professor of law and professor of business at the University of Illinois, recently discussed the concept of “regulation by litigation” in a Raleigh speech. He also discussed the topic with Mitch Kokai for Carolina Journal Radio. (Click here to find a station near you or to learn about the weekly CJ Radio podcast.)

Kokai: First of all, what is this all about? “Regulation by Litigation”? What does that mean?

Morriss: Well, everybody knows what regulation is. Regulation is usually when the government issues a rule, or Congress passes a statute, or the state legislature passes a law that tells people what they have to do in the future. Regulation by litigation comes about when some entity — whether it is a government agency or private lawyers — uses a lawsuit to accomplish the same things. In other words, they get people to change their behavior in the future based on settling a lawsuit today.

Kokai: And I understand that part of this is the threat that if you don’t settle this lawsuit there is going to be some catastrophic loss.

Morriss: Exactly. So the way to think about this is usually what happens is we threaten an industry with something so terrible that they agree to change their behavior in the future to settle the lawsuit. Now people might say, “Well, why do I care about that? Why not? If the industry is doing something bad, let’s make them change their behavior.” And the problem is that when Congress passes a statute or an agency issues a rule, we have means for the public to participate in that. Those means aren’t perfect, and we get statutes we shouldn’t have sometimes or rules that we shouldn’t have. But there aren’t any means for the public to participate in regulation that is done through litigation, and indeed agencies and state government officials and even private actors use litigation to escape the constraints that our state and federal Constitution put on governments to try to control the areas in which they regulate.

Kokai: Among those who are using this process are groups that have been called, I understand, “bootleggers and Baptists.” And in your work, you add “televangelists.” What is this all about?

Morriss: Well, my co-author, Bruce Yandle of Clemson University, came up with the “Bootleggers and Baptists” theory back in the ’80s in Regulation magazine. And the “Bootleggers and Baptists” theory boils down to this: if you think about Sunday closing laws where liquor stores have to be closed on Sunday, the bootleggers are in favor of Sunday closing laws because it increases their market. If you can’t buy beer at the liquor store, you are more likely to buy it from the bootlegger. The Baptists are in favor of it because they don’t like people selling liquor. So the bootleggers and Baptists get together, not explicitly but implicitly, and get the state legislature to pass the Sunday closing law. In regulation, what this means generally is that somebody with a financial interest who can’t explicitly go out and argue for a law, say, that transfers wealth to them, will hook up with somebody who has a high moral purpose — pursuing the public interest — and get a law passed or a regulation issued or in our case a settlement of a lawsuit that does exactly that. So it looks to the outside world like it has a high moral purpose, but in fact it advances private interest.

Kokai: And in your work you have extended this beyond the initial concept from the ’80s of bootleggers and Baptists to add another category. What is that category?

Morriss: Okay, we continue with the metaphor. We added “televangelists,” and specifically we did it looking at the regulation of tobacco through litigation. And the televangelists in the analogy are … Well, the bootleggers are the tobacco companies. The Baptists are the public health groups and public health regulators like the FDA. And then the televangelists are the state attorneys general and the private lawyers who worked with them to sue all the tobacco companies in the ’90s.

Kokai: Why is this a bad idea?

Morriss: Well, the tobacco case is a good example of this. So in the tobacco case the state attorneys general sued the tobacco companies with the assistance of some private lawyers who had done very well — largely in suing asbestos companies — and so had a lot of money and familiarity with lung disease. [They] sued on behalf of the states, arguing that tobacco has caused individuals to get sick, and those people have then gotten state benefits, and so the states had to pay money for this. You say, “Okay, well, tobacco clearly is a dangerous product. Why not? Why shouldn’t the tobacco companies pay for the harm they did?” The problem is that the structure of the settlement they worked out with the tobacco companies was to essentially increase the price of tobacco in the future. It wasn’t to pay a tort damage … like you would pay if you ran somebody over with your car; you would have to write them a check. But it was essentially to pass a tax on cigarettes. Now we know how to pass taxes on cigarettes. We get the state legislature to pass a tax. In this case, the state legislature didn’t pass a tax. But, in fact, there was a tax increase nonetheless. And that funded hundreds of millions of dollars being transferred to states, from smokers as well as to the plaintiffs’ attorneys who brought the suits and through them through campaign contributions to the state attorneys general. Now again, so we said tobacco costs more. What is the problem? Well, this enabled the tobacco companies to raise prices. They raised prices by more than the tax that was the result. And so smokers ended up funding a gain for tobacco companies, for politicians, and for lawyers. That doesn’t seem right.

Kokai: Some people may hear that and say, “Well, you know, I can see the result and don’t have much of a problem with that. Maybe it’s a good case of these means — sort of questionable — leading to good ends.” One of the things that you point out in some articles on this topic is that the people who really get cut out of this process are members of the public: just normal taxpayers who are not getting to play a role when these bootleggers, Baptists, and televangelists are all doing their deals.

Morriss: That’s right. So one of the main problems is that what happens in the settlement of these lawsuits is that people agree to things that are done outside the regulatory process. So when the state of North Carolina issues a regulation, or if the federal government issues a regulation, there is a period for public comment. And the public can comment, and then if the state agency doesn’t pay attention to those comments people can sue and say you didn’t consider important information. That doesn’t happen in settlements. In fact, what we found is that in a number of settlements people tried to make comments. One of the other examples we look at in the book is at the EPA’s regulation of heavy-duty diesel engines. And EPA required the engine manufacturers to dramatically change their engines. Well, the people who make trucks tried to comment on it, and the judge ruled they didn’t have any standing to comment on the thing. So they were kept out of the process. If the EPA had issued a rule, their views would have had to be taken into account. But because it was done through litigation they were shut out. As it turns out, the truck manufacturers were right, and EPA caused a serious problem in the heavy-duty trucking industry by its ill-informed interventions.

Kokai: Why would we be better off if this public process, flawed as it might be, is the one followed and not this regulation by litigation?

Morriss: Well, there are … three things that are better off. Lawyers always think in threes. So I will come up with three. One is that there is some value to the public having an opportunity to participate. That is what makes government action legitimate. Now we may not like what government does sometimes, but at least if there is a public process then the public has had a chance to participate and it is a legitimate process. And if you don’t like it you can throw the rascals out. So … some actor is politically accountable. In this litigation, it is some lawyer, at an agency, you know, a lawyer from a company settling the case. And there is really nobody to vote out of office.

The second problem is that we find that the constitutional structures that we have to create accountability get short-circuited. So in the tobacco case state attorneys general who do not have the authority to raise taxes ended up raising taxes. That is not their job. And then the third problem is that particularly in the tobacco case we ended up funding a group of very wealthy plaintiffs’ lawyers who now have taken their money from the tobacco suits — which was sort of like hitting Fort Knox — and gone out in an entrepreneurial way and invested it in suing other people. So they are using that money to fund lawsuits against the fast food industry, against the gun industry, against all sorts of stuff, trying to extend their ability to influence public policy. They are unaccountable to anybody, and they are funded in perpetuity by the settlement from the tobacco cases. So that is, again, an anti-democratic step.

One group of redistricting challengers wants all N.C. Supreme Court justices to participate