History professor Scott shares details from ‘A Visitation of God’ 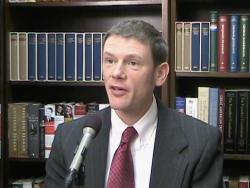 The 150th anniversary of the American Civil War has generated quite a bit of scholarship about a key event in the nation’s history. Dr. Sean Scott, visiting assistant professor of American studies at Christopher Newport University in Virginia, has written a book titled A Visitation of God. It examines the war from the perspective of religious people living in the Northern states. Scott discussed his research with Mitch Kokai for Carolina Journal Radio. (Click here to find a station near you or to learn about the weekly CJ Radio podcast.)

Kokai: So why did you think, of all the topics that could be discussed about the Civil War — battles, generals, presidents, all of the other topics — why was this one that struck you as one that ought to be discussed in a book?

Scott: Well, I had done a lot of reading on soldiers and their religious beliefs and had seen that scholars could come up with book-length studies of how soldiers themselves used their faith to understand why they were fighting and to deal with the hardships, being away from family. So I thought I could look at the Northern home front — nobody had really studied that in any depth — and see if religious beliefs really helped people understand the war and the sacrifices they were called to make. So I started looking at letters and diaries and found there was a lot of information; enough to write a dissertation which then became this book.

Kokai: Now, you mention that you did find a lot. Were you surprised that you were able to find so much that helped you put this book together?

Scott: Once I started digging and saw how many letter collections that there were, I wasn’t necessarily surprised, but I hadn’t — at the time, I was making 3-by-5 cards and putting my notes on them, and I had a whole shoebox full of 3-by-5 cards with notes, and most of them didn’t make it into the bigger study. So yes, there is so much information out there that it was, I guess, more amazing that a lot of these letters were preserved.

Kokai: What were some of the things that you found that interested you and made it into this book?

Scott: There’s, I think, kind of three themes that come out. The first one is the emphasis on providence or the sovereignty of God — how many individuals saw the war as being directed by God or being controlled by him. That yes, individual people were making the decisions and were fighting the battles and whatnot, but yet they saw a higher power that was kind of controlling American history.

And they thought this way because a second theme was the importance of the Union and the fact that it was sacred — that America was kind of destined in providential history to be that kind of last bastion of democracy and we would export democracy around the world. And not only that: Christianity would be sent around the globe and that heathens would be Christianized. And if America, as a nation, split in two, then what is that going to do with God’s plan for the Union?

And so there was that sacred element that most religious people talked about in their letters. And so, battles weren’t just the specific [of] who won the Battle of Bull Run. Yes, obviously that’s important … but they also want to know how is this helping us move forward and promoting the vision of what they think America should be.

And then, because of that, this kind of assurance that God was working on behalf of the North, you’ve got a divided citizenry. And so you’ve got a lot of Democrats who are opposed to the Lincoln administration or how he’s prosecuting the war, especially once it becomes an emancipationist war.

And so you have church splits that I found; even small churches with only 20, 30 people. They would have resolutions on whether or not the war was about slavery or what exactly was going on. And you would hear these dissenters who would not vote for the resolution, then ultimately they would show up as, in a few months, not attending the church anymore, and — in some cases — pastors being forced out of their denomination because they voted for a Democratic candidate for governor or whatever the case might be. So this political division in the North came into the churches as well, and that was something that really kind of surprised me.

Kokai: I wanted to circle back to something you mentioned about some of these folks really believing that God was directing the war in the favor of the Union. It had to have made it tough at the times when the Union was really struggling. I mean, the Union troops didn’t just go out, win a couple battles, and the war was over. This stretched on, as we know, across five Aprils — lots of death, lots of destruction. Did this really challenge people’s faith?

Scott: Most definitely. You know, people had to look and say why — because most people thought it would be a very quick war. That’s why so many people enlisted right away; they wanted to get in the action and get the glory while it was available in those first two months, and then the South would be whipped.

And so when Bull Run happened in 1861, there were no major victories, and all these downturns, people have to find out: Why are we not having these victories? And so a lot of ministers would talk about things like the idea of chastening, that God is having to punish you for your sins before you can move forward and grow.

And so they would look at, not just necessarily slavery, but look at drunkenness or intemperance or Sabbath-breaking, or all kinds of these things that in the 19th century were big issues in the Antebellum era.

Now saying that, OK, here’s the war, God is punishing us for these sins, and then specifically slavery being the one where you might be surprised how many Northerners would say that the North was to blame, in part for slavery. It wasn’t just a Southern institution, and that God was punishing the whole nation, and that’s why the North had to have several defeats, because of their willingness to support slavery in various and sundry ways.

Kokai: Now during a presentation set up by the North Carolina History Project, you focused on a particular chapter of the book that dealt with the reaction, among those religious observers, to the assassination of President Abraham Lincoln. What did you find there?

Scott: Lots of cool stuff with Lincoln’s assassination. Things that you might expect: sorrow, shock, anger. But I think one of the more interesting things was the level of vengeance that you found among just even average housewives in the North.

Especially when just six weeks earlier, Lincoln had talked in a second inaugural address about “with malice toward none, with charity for all,” and trying to bind up the nation’s wounds and unify the nation. And then after he is struck down, you’ve got so many Northern civilians who want to punish not just John Wilkes Booth, as they’re figuring out that he was the person, but thinking that there was a greater conspiracy, and ultimately punishing Southern generals, and especially in the sermons that were delivered in the day after and even the weeks after — there was about a six-week period of mourning.

Just the vindictive spirit that you found of wanting to get revenge. And even though, you know, there’s a verse that talks about “vengeance is mine, saith the Lord, I will repay,” saying that we need to take matters into our own hands and punish the South. And so that was one key thing that I found.

Another interesting thing was the number of people who wanted to focus on Lincoln’s personal religious beliefs, even though he had never joined a church, even though he was relatively silent about his personal faith — if he had a personal faith. So many ministers wanted to put him in heaven, regardless of their denominational, distinctive beliefs. They would say that Lincoln sacrificed himself for the nation, and surely he, like George Washington, has gone to his future reward.