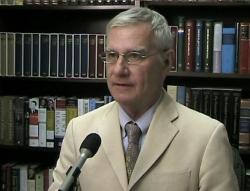 It’s hard to spend much time reading the news without encountering a story spelling out the purported danger of global warming. Even if you don’t believe the hype, it’s important to know the impact that hype has on our lives. Patrick Michaels, senior research fellow for economic policy development at George Mason University and senior fellow at the Cato Institute, edited a recent book that focuses on the issue. Michaels discussed Climate Coup: Global Warming’s Invasion of Our Government and Our Lives with Mitch Kokai for Carolina Journal Radio. (Click here to find a station near you or to learn about the weekly CJ Radio podcast.)

Kokai: Climate Coup, what’s it all about?

Michaels: Well, I think the title says everything. What’s happened is that global warming has taken over so many aspects of our political lives that it really is a coup. And it didn’t occur because of some conspiracy or anything like that. It occurred because of the way that we do science and the incentives that the political process recognized that result from emphasis on the global climate issue.

Kokai: Why do you think this coup came about?

Michaels: The issue is about money and control and power. These are the currencies of Washington, D.C. There’s no environmental issue like this. There never has been one, and I don’t think there ever will be one. And the various and sundry interest communities in Washington — the science community, the policy community, the green community — they all see something in this for them, and they have all worked together, basically, to have this invade as much of our government as possible.

Kokai: Before we go further into the coup and how it has affected our government, let’s get into the basics of global warming. Some people who know your name … and are hearing you now, will say, “Oh, he’s a denier of global warming.” What do we really know about global warming and if it’s taking effect?

Michaels: We know that the planet is about 1 degree Celsius warmer than it was over a hundred years ago. There were two warmings that took place in the 20th century, one from about 1910 to about 1945, and another one from about 1975 to the late 1990s. Both of them were of similar magnitude, and we think that the one, the second warming of the 20th century, has much more of a human component than the first one. It’s debatable exactly how much of it was caused by carbon dioxide, but you know, people throw around the number of half of it — people like me — and I think that’s a reasonable number.

Kokai: Looking at what you just said — or listening to it — you’re not denying that there’s been global warming, but the problem seems to be how this information has been used.

Michaels: Whether or not warming occurs is irrelevant. It’s how much warming occurs, and how it occurs. Meaning: Does it occur more in the winter than in the summer, more in the day than in the night? And, in fact, how much, it happens to be very small, compared to the projections of some of these computer models. “How” happens to be mainly in the winter and mainly in the night, rather than during the summer days, and that’s certainly much more benign than if it was a massive warming of the summer days. And people clearly have adapted to 1 degree’s worth of warming. A hundred years ago — between a hundred years ago and now, crop yields for corn have quintupled, life expectancy doubled. Global warming didn’t cause that, but it didn’t stop it.

Kokai: As you monitor this debate, what’s the biggest mistake that people who are alarmists make as they push this agenda?

Michaels: They think that global warming is proceeding at an alarming rate, when in fact it’s proceeding at a very modest rate, and it hasn’t — there’s been no warming at all in the last 14 1/2 years in the temperature records. Now, that doesn’t mean that there won’t be warming in the future. But I think that a synthesis of the science strongly suggests that the sensitivity of temperature to carbon dioxide doubling was overestimated in the computer models. It’s not that carbon dioxide doubling won’t create warming. I think that the sensitivity number, to me, looks to be around 1.6 degrees, for a doubling of CO2. I mean, that’s not nothing, but it’s also not the end of the world. And by the time you get on out to a hundred years from now, the energy structure of our society will be so radically different than today that you would be foolish to try and predict what it would be and, therefore, to try and direct what it would be.

Michaels: One of the things that should raise the red flags is that every time a scientist gets on television, that person is on TV because he or she says it’s worse than we thought. And you know, in an unbiased world, every time you have a new finding that bases off a previous finding — if the previous work was unbiased — the new finding has an equal probability of saying, “Oh, you know, things are going to be worse than we thought,” or, “Things are going to be not as bad as we thought” — if the previous work is unbiased. And that turns out not to be the case at all. What we see is a remarkable propensity for only “it’s worse than we thought.” There are several reasons for this bias, not the least of which is you’re not going to keep $3 billion of research money coming a year, and you’re not going to keep those first-class seats, if you say this isn’t much of a problem.

Kokai: So as people are making more of global warming than [they should], what do we do to change this situation, if anything?

Michaels: The best thing to do is to do nothing, because doing nothing is really doing something. Doing nothing means you don’t take people’s money away, give it to the government, [and] have the government throw it at stupid — and I use my words carefully — stupid things like solar energy and windmills and ethanol. Instead, you let people keep their money, and they will invest it in companies that they think produce things efficiently or produce efficient things. If you don’t believe that, take a look at the share price histories of Toyota and Honda versus General Motors, which eventually went bankrupt because they produced things inefficiently that were inefficient machines. People who invested in Toyota and Honda, they probably sent their kids to college.

Kokai: If people did nothing in terms of public policy geared toward global warming, how much of any warming would be addressed by efforts to improve efficiency anyway, with no concerted effort to deal with global warming at all?

Michaels: These efficiency mandates really don’t do all that much, because sometimes there’s really not all that much that we can do. You know, the government is incredibly behind the Chevrolet Volt, which is a nice piece of technology, but when you come right on down to it, they have to subsidize it to the tune of $7,500 per purchaser. Still, not many people are buying the car. It turns out that the electric range in the car was not what it was originally advertised to be, and so it reverts to its gas engine — which has a very, very odd arrangement with the wheels, by the way — and the car, when it’s running in gasoline mode, gets … 30 mile per gallon figures, in the lower 30s. The car is built on the Chevrolet Cruze platform. The Cruze gets more [gas mileage], and it costs one half as much. You can buy two Chevrolet Cruzes and get better fuel economy in the gas mode than you would for one Volt.

Saving for the retirement of teachers and state employees