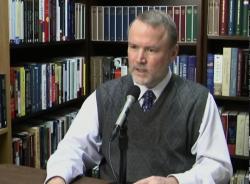 The philosopher and critic George Santayana warned: “Those who cannot remember the past are condemned to repeat it.” As the nation and world have struggled with the flailing economy over the past couple of years, many people have looked to the past for guidance. Bruce Caldwell, research professor and director of the Center for the History of Political Economy at Duke University, recently discussed the importance of economic history in a presentation for the John Locke Foundation’s Shaftesbury Society. He also discussed the topic with Mitch Kokai for Carolina Journal Radio. (Click here to find a station near you or to learn about the weekly CJ Radio podcast.)

Kokai: What can we learn from the past to help us deal with the problems that we’re facing now? How important is it that we know the history of economics?

Caldwell: I, of course, am somewhat biased, but I’d say it’s extremely important. The Center for the History of Political Economy is designed to promote research in the teaching of the history of economic thought — or history of political economy. So of course we’re in favor of this. But indeed, particularly during times of crisis, people turn to the past. They say, “Well, what’s happened in other times? How did people respond to it? How did we get here? What things might we have forgotten?”

And our center, certainly in looking at what economists have written through the ages, from Adam Smith or before Adam Smith onwards, tries to give some perspective. We had, for example, given the recent crisis, the opening gala celebration of the opening of the center was … a panel discussion — four economists of thought at Duke talking about [British economist John Maynard] Keynes or aspects of Keynes. One talked about Keynes and his relationship with the Bloomsbury Group. Another talked of Keynes as a policy adviser. A third one looked at the macroeconomic ideas of Keynes. And I contributed one saying, “Well, wait a second. It wasn’t just Keynes. There’s also Hayek, who was his great opponent, Friedrich Hayek.” So in looking at the various ideas of people — Keynes has certainly been in the news lately — but if you think of who might take views that would be different from Keynes, Friedrich Hayek would be that person.

Just to point out another instance of that, there was a wonderful PBS program called “Commanding Heights” a few years back. There was a three-part series. In the first series, the entire series was about Keynes and Hayek. Obviously they thought the best way to present — globalization was the larger theme of “Commanding Heights” — but the best way to present this, to get the idea of how we got to where we were at the end of the ’90s, the early part of [the 2000s], was by looking at it historically.

Kokai: Some people will say, “Well, wait a minute. People have been around for thousands of years. The industrialized economy has been around for a couple hundred years. Hasn’t economics figured things out yet? Don’t we know what works, what doesn’t work, what formulas are proper and what are not?” Is that the proper way that we can address the situation?

Caldwell: The kind of view that you’re articulating might be viewed as what Hayek called a “scientistic view.” In this view science progresses steadily, bad theories are overthrown, good and true theories replace them, and as a result, the most recent work contains all of the true theories. Past works are just — it’s a dustbin for rejected theories.

Well, in some disciplines perhaps that’s the way those disciplines develop. But in fact, Thomas Kuhn, who talked about ever-changing paradigms within science, was using the physical sciences as his model. So I’m not sure that would even be the case within the physical sciences. It certainly is debatable whether it’s the case within a science like economics. In economics you have rival theories, and it’s often quite difficult to establish one over the other.

Indeed, one way to look at economics is that it’s constantly having these broad swings in one direction or another. After the Great Depression, Keynes came on. After the stagflation of the 1970s and early ’80s, free-market thinking came on. Now we’ve had another turn back, so some people are turning back to Keynes. … It’s rather sad, but this seems to be a relatively good explanation for why theories catch on at particular points in time. [It] may have very little to do with the validity of the theory.

Caldwell: The very quote that you started the program with, I think, is one that most historians of thought would agree with. If you don’t know the past history, it’s quite easy to make mistakes. And indeed, people who have been commenting on the most recent crisis — one set of comments that I thought were quite reasonable was, “Well, you know, we’ve had the great moderation.” People thought business cycles had gone away.

Now, if you looked at the works or the ideas of Hayek or Keynes, they both thought business cycles were a permanent part of the economy. But after you’ve had a long period of time when you haven’t had them appear, a lot of the people who had experienced them have died. And if you haven’t studied history, you’re not going to know about it, either. So there’s something to be said even in the very short term. A short-term absence of historical knowledge can be quite devastating as well, as recent events show.

Kokai: You are the director of the Center for the History of Political Economy, and for those who don’t follow this very closely, that is sort of a unique operation, certainly in our part of the world. Why is it important to have something like the center doing its work?

Caldwell: Increasingly history of economic thought is not being taught in economics departments, so you’re getting economists who are trained to do economics but have no idea of the history of their discipline. And history of thought also forces people to study more broadly, have a more, kind of a broader liberal education. … Adam Smith, in addition to writing The Wealth of Nations, wrote The Theory of Moral Sentiments. John Stuart Mill wrote On Liberty, as well as the Principles of Economic Thought.

Studying economics gives you an idea of social sciences that go beyond the more narrow training that you would get if you don’t have it. So part of our mission, then, is to promote the study of the history of ideas among economists. We think it’s something that is sorely missed, and it’s actually the rationale of the whole existence of the center.

To do good or do better