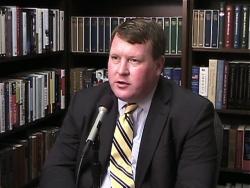 Original documents should play an important role in American history education. That’s the approach from Roger Beckett, executive director of the Ashbrook Center at Ashland University. Beckett explained his preference for original historical documents over textbooks during a recent presentation for the John Locke Foundation’s Shaftesbury Society. He also discussed the topic with Mitch Kokai for Carolina Journal Radio. (Click here to find a station near you or to learn about the weekly CJ Radio podcast.)

Kokai: There is a wealth of historical documents available about America, and, from your vantage point, we need to spend some time looking at them and studying them.

Beckett: One of the blessings we have as Americans is this wealth of the written word, where we argued with one another, and laid out our cases in newspapers and in pamphlets, and just made our case about how to best create constitutional self-government in this country. And so, we are fortunate to have a wealth of these things that we’re just not taking nearly enough advantage of in our schools.

Kokai: And that’s something that is really different from even the other societies that people would look up to. Many of their governments developed over time, and as historical preferences changed. But the United States really started as an experiment.

Beckett: Exactly. And I think the founders really understood that for self-government to work, you had to have an educated society. You had to have a society that was not only literate, but also understood something about its government, really, for this experiment in self-government to be successful — something that was absolutely critical, and it’s just been there from the beginning for the country, and we are very fortunate for that.

Beckett: We do a lot of work at Ashbrook, where I am, helping teachers improve their understanding of original documents so they can put textbooks aside and instead use these documents, which really tell America’s story. It’s a great story that they need to have a better understanding of, and you can’t get it from a textbook.

I often think to myself that I wouldn’t want to read a textbook myself. Why would I want my kids to read one? And we should be thinking the same with schools. And the advantage of these original documents is that they’re much more engaging for students. They really get into the nuances of the real story of America.

Kokai: There are plenty of documents to choose from, but what are some of the ones that people absolutely have to review and study?

Kokai: I’m sure people will think of the Declaration of Independence and the United States Constitution, but what are some things in that book that we might not think of right away?

And that’s really where the story is. It’s also full of some beautiful things like [Martin Luther] King’s “I Have a Dream” speech, or George Washington’s letter to the Hebrew congregation at Newport where he, in just a poetic way, explains religious liberty in America and how it was developed here for the first time in the world.

Kokai: Very fascinating. … Some people might be listening to us and saying, “That sounds really good. Some of these documents might be kind of hard to understand or interpret without a textbook, or without some expert leading me through it.” Is that true, or are these documents ones that most people would be able to comprehend and get the proper sense of them themselves?

Beckett: Yeah, I think often we take educated people a little too seriously. I think the notion that we have to have someone who has devoted their career to studying these things explain how government in America ought to work is something that the founders would have been shocked by.

Certainly, some of these things are hard, but you have to work through them. And every time I read The Federalist Papers, I find something new in them. You’re not going to get everything the first time you read these things. You just have to begin working through these things, having conversations, and I equate it to something close to what we do in churches, with Bible study. You have conversation about scripture.

Kokai: It sounds as if this also might be a good way for parents and their kids to interact. Parents reading this to kids and saying, “What do you think this means?” And then giving their own interpretation — great interaction tool.

Beckett: Exactly. And one of the things we provide in the book is a short introduction and some questions to think about, just to point you in a few directions there. It’s absolutely a great tool for parents to use with kids, for homeschoolers to use. We found a lot of grandparents giving it to their grandkids. It’s something that really is much more accessible than you might think.

Kokai: How will our society be better off if people spend more time reviewing, studying, and learning from these original documents?

Beckett: For constitutional self-government in America to work, you really do have to understand something about the history of the country and about why it was established. Not just how our government works, but why it works that way.

Most of the political conversations that we have on the national level are not new. Most of them have been conversations that we have had before, and it’s just part of an ongoing conversation in America. And there is a lot to this story already if you really want to be more thoughtful about how you approach issues today, take advantage of what we’ve been given already, and the people who’ve dealt with similar issues in the past.

Kokai: You’ve compiled, as you said, a number of these important documents into a single book. What’s the response been among people who know about your 50-document collection?

Beckett: To be honest, we’ve actually been really surprised by it. It was a small project when we started it, and it’s turned into a very large project that many people are interested in … We’re sending it to many teachers around the country and making it available to them.

You know, teachers really do like the idea of using documents. It’s just a question of getting them comfortable with the material around it so that they feel comfortable using it in their classroom. So we’ve actually been really thrilled with the response so far.

Kokai: That sounds good, and for people who are listening to our interview and would like to get a copy, or find out more information, what’s the best thing for them to do?

Beckett: You can go to the fiftydocs.org website, and you can download a copy of the book there. We have it in Kindle, iTunes, and PDF format. Or you can buy a copy from Amazon there if you’d like to. We are just trying to make this available to as many people as possible, so I encourage you to go to that fiftydocs.org website.

Education debate need not be vicious

Bad blood: The sometimes rocky relationship between the N.C. State Board of Education and Superintendent Mark Johnson