Friday Interview: The Importance of the U.S. Constitution 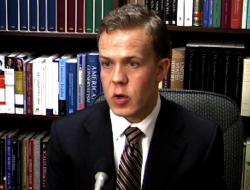 Most of us learned in school that the United States Constitution is the supreme law of the land, but far too few people understand the document and the limitations it places on government. David Bobb, founding director of the Allan P. Kirby Center for Constitutional Studies and Citizenship, a Washington, D.C.-based program of Hillsdale College, discussed the Constitution’s importance during a presentation to the John Locke Foundation’s Shaftesbury Society. He also discussed that topic with Mitch Kokai for Carolina Journal Radio. (Click here to find a station near you or to learn about the weekly CJ Radio podcast.)

Kokai: The basic question is, does the Constitution still matter? Why is that something we’re asking?

Bobb: It is a remarkable thing to have to ask that question because one would think that with all of the attention focused on issues that connect in one way or another to the Constitution, that we wouldn’t have to ask the question. But, in fact, what I mean by the question is, does it matter in terms of its first principles? How is it relevant in a day-to-day way to the legislation that comes out of Congress — to the thinking, the public policymaking that our executive branch is involved in, and also to the judicial branch. Of course, I think most Americans operate with the model that it is the main duty of the judicial branch — that it is the province of attorneys and judges to care about the Constitution — and that somehow the other two branches are, in a way, left off the hook. I think that is a problem because what we’ve had is an abdication of duty in those other two branches of government and, ultimately, in our inability to force a debate that goes back to the Constitution. What is the Constitution’s relevance? It ought to be — we believe [at] Hillsdale College — first and foremost, the most paramount of questions should be those that are constitutional.

Kokai: Beyond just the abstract principle of the Constitution being important, you mentioned during your presentation to the John Locke Foundation’s Shaftesbury Society that you saw some real-world examples of this every day when people associated with your center asked congressional staffers on both sides of the aisle constitutional questions. They would say, “Well, hey, that is not that important,” or “That is a minor consideration based on what needs to get done.”

Bobb: In fact, these people are students, interestingly enough. Hillsdale College places, through the Washington Hillsdale internship program, approximately half a dozen. This semester [fall 2008] we have nine students; we are growing to a goal of 40 per year. Students, undergraduates — usually juniors and seniors — in congressional offices, when they talk to the legislative assistants — those staffers helping members of Congress draft legislation — and then the legislative directors — those folks charged with the particular legislative direction an office is going to take about the constitutionality of certain measures — they are met with quizzical looks, or even worse, sometimes dismissed. Those aren’t relevant, is the general tenor of the response. This, of course, confuses our students because they are used to a discourse that is very different, where you are putting constitutional issues first and foremost. But in the real-world application, all too often necessity trumps constitutionality. I think particularly we’ve seen this in terms of, in times of, crisis. When decisions have to be made quickly, the Constitution is even more quickly discarded. That is why we think that we need to instill in members of Congress, and in their staff people, a recognition of the Constitution’s central importance.

Kokai: Dr. Bobb, it is one thing to raise the question. Now that the question is out there, what do we need to do about the Constitution and ensuring that it is something that matters?

Bobb: Well, I think the first thing that citizens can do is sit down, get a copy of the Constitution, and read it. It is not that long. It takes about a half-hour. There has been a lot written about the Constitution and the case law — the things that attorneys and judges do pay attention to — that has become very, very complex and complicated. But the Constitution itself is a series of articles. Each article lays out the particular duties — first off, the legislative branch, then the executive branch in Article II, and then the judicial branch in Article III. It states in simple, clear language what each duty — the duties of each branch of government. I think that beyond reading the Constitution, we have an obligation then to ask our legislative officials, to demand of them, that they, too, pay attention to the Constitution. Then we should support efforts that are dedicated to educating people — regular everyday citizens — about the Constitution. Perhaps of most long-term interest, we should insist that our schools teach the Constitution and the Declaration of Independence and the enduring principles in those documents.

Kokai: What about the idea that we often hear, that the Constitution, the actual document itself, is fine, but the government needs to adapt to changing circumstances. Things are much different now than they were in the 1770s. We need to have a “living Constitution.” What is the proper response to that?

Bobb: The Constitution was designed to be living only in one very limited way, and not at all in the way we have come to know this kind of term — the “living Constitution.” The Constitution can be amended. It is hard to amend the Constitution, but it was designed to be difficult. The Constitution, in being made this living document, has been turned into a tool for each branch of government — but particularly the judiciary — to breathe into it whatever theories are popular in the day. So fads, legal doctrines, theories that really very few people understand, have been imposed over the Constitution. This has resulted in a real tangled web. So I think that our current understanding of the living Constitution needs to be dropped effectively. We need to go back to a Constitution that is enduring, rather than living. There is a big difference between that. These principles that were relevant for our founders, and that were deemed enduring by our founders, still endure today — but only if we still believe them.

Kokai: I want to turn back to another point that you made earlier, and that is that it is much more likely that these enduring principles of the Constitution will be ignored or set aside in times of crisis. In reading Hamilton and Madison and the founders, didn’t they design it entirely for the times of crisis so that it would stop bad decisions from moving forward?

Bobb: I think that is precisely right. You craft a broad structural document. You have to understand the structure of the document first and foremost. Rather than cramming it with all kinds of policy matters, you keep it focused on the polity — what kind of a regime, what kind of a country are we going to be? What form of government, after all, are we going to be? That is the main question that the Constitution addresses. It leaves the people to figure out what policies, what particular policies, we are going to follow. So I think that you are precisely right that unless you are steeped in those principles, when crisis comes, you are going to fall away from those principles. I am afraid that is what we have been seeing as of late.

Kokai: If there is one good first step that we need to take to ensure that the Constitution has its rightful place, what should we do?

Bobb: I think it really comes in focusing on the idea of self-government. Self-government starts with an individual, a family, a school, thinking about the principles of civic education. Pick up a Constitution and read it. You might be surprised what you find.

Should N.C. prison system be restored as a standalone agency?