Friday Interview: The Morality of Capitalism 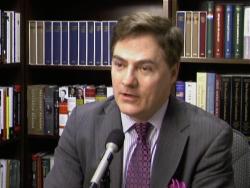 The Occupy Wall Street protesters and their imitators across the country have aimed much of their wrath at capitalism. But a recent book offers a different perspective. It’s titled The Morality of Capitalism: What Your Professors Won’t Tell You. Editor Tom Palmer is executive vice president for international programs at the Atlas Network and senior fellow at the Cato Institute. He discussed the book’s key themes with Mitch Kokai for Carolina Journal Radio. (Click here to find a station near you or to learn about the weekly CJ Radio podcast.)

Kokai: Capitalism really has come under fire for centuries, but in recent weeks and months, we’ve heard quite a bit about capitalism and people are calling it an evil force and a force that has led to problems around the world and in the United States. It sounds like, from the title of your book, you disagree.

Palmer: Yes, I think that those criticisms are in fact confused and based on factual mistakes. Let’s take the very first point. Something is on trial. Something caused the current economic crisis that has gone global. What was it? Was it free-market capitalism? Well, if you look at the causes — Federal Reserve system pumping out cheap, easy money and setting interest rates in negative territory, which is really not something private banks do. Normally, you pay the bank to borrow; the bank doesn’t pay you to borrow, which is what the Fed was doing. Now, Fannie Mae and Freddie Mac, these are government-sponsored enterprises. The Federal Housing Administration … all of which pumped up a gigantic housing bubble in this country, quite deliberately, and it popped. And the consequence has been a disaster. Highly regulated financial markets meant that banks were encouraged to load up on government-guaranteed, mortgage-backed securities, and this caused a financial meltdown around the world. This is not a problem of capitalism. This is a crisis of interventionism and cronyism. So that’s the first point.

The second point is I think that the Occupy Wall Street protesters are deeply confused. I mean, no doubt nice people, what I assume is good motives on the part of other people, but I think that they’re intellectually deeply and profoundly confused. And the irony, of course, is that they’re texting each other on their iPhones and Blackberrys, and going into Starbucks to freshen up on coffee imported from abroad. They’re living the lives of fabulously rich people. This is the richest generation of human beings who have ever walked the earth. They will live longer than any previous generation. I won’t say they’ll be better educated, but they’ll be longer schooled than any generation in human history. They have more access to material goods, health care, everything. You name it. And they’re complaining about poverty. That’s a bit ironic.

Finally, if you want to look at income or asset disparities, the big ones are not within relatively free-market societies like the U.S., Canada, Western Europe, Japan. The big gap in the world is between those societies that have embraced free-market capitalism to a greater extent and those that have not embraced it or have rejected it. The gap is staggering. You want to see poverty? Go to socialist countries. Go to countries that do not have market institutions, and there you will see destitution and poverty. That is an income gap that is a scandal, that is immoral, that is shocking, and is caused by the absence of capitalism.

Kokai: It’s one thing to say that capitalism is not evil, is not the source of our problems. Your book actually talks about the morality of capitalism as a positive force. In what way is capitalism something to be admired for its propensity for helping us be more moral?

If you look at free-market capitalism, at its foundation is respect for other people. If you want something that someone else has, there are at least two ways to get it. One is go whack them in the head and take it from them. The other way is to offer an inducement, something that would cause the person to voluntarily exchange it. You’ll pay money for it. You’ll exchange services. Those are based on respect for other people, so at the heart of free-market capitalism is the idea that people matter, that you have obligations to other people to respect them. That’s very important and should not be taken for granted. Other systems — communism, fascism, all these other anti-capitalistic systems — are based on the idea that people are means to the ends of other people, rather than being ends in themselves. So that’s the first point.

Second, capitalism teaches you to be respectful to other people. There’s a wonderful phrase that the English still use in little stores. You buy something and they say, “Thank you for your custom.” That’s what it means to be a customer. You get this double thank you experience. Think about it. You go into the store, and you buy something. You say, “Thank you.” And the other person who sold it to you says, “Thank you.” There’s a double thank you because it was an act of respect between two people, both of whom benefited from the exchange.

So fundamentally, it’s about teaching people respect, and that has spilled over into all of the areas of human life. Where does religious toleration come from? From socialism? From communism? From fascism? No. It’s merchants who have taught our society to be morally tolerant toward people of different religions, different races, colors, and so on. It’s capitalism that has engendered this liberation of the human spirit and respect for human diversity. You don’t get that under systems where the state exercises control. Then, the group — the religion, the sect, the race, the class, the tribe who can get control of the state — uses it to plunder and harm everyone else. But under capitalism, people enter together into the market as moral equals in exchange for mutual benefit.

So we owe religious freedom to capitalism. No capitalism, no religious freedom. We owe such things as the liberation of gay people to the experience of private property; they didn’t have to go to some kind of state entertainment establishment. They could have gay bars where they could come and meet and socialize among themselves. That liberated people from those kinds of social controls. And then think about all of the other ways in which human beings are diverse. There’s something for everyone. You can use an Apple computer like I do, or you could use one of those clunky other things that other people use. We have free choice. You can go to all kinds of different educational opportunities — artistic, aesthetic, religious. That’s what capitalism brings to the human race: respect for human diversity and respect for the human person.

Kokai: If someone has this view in his mind that something that generates a dollar has to be suspect, what’s your 30-second reply?

Palmer: Get real. The world is such that we use medium of exchange to facilitate cooperation among persons, and a dollar helps to achieve that. People don’t want the dollar for its own sake. It’s for the services and amenities that it can bring to you in voluntary exchange with other people. If you want to abolish the market economy and abolish money, OK. We know what you get: cannibalism. I much prefer a monetary market economy to cannibalism, but, hey, other people may differ.