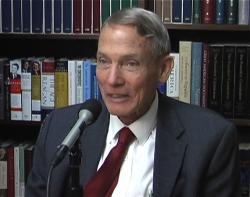 Those who follow debate about global warming and its cousin, climate change, have heard and read high-profile arguments about the danger caused by increased emissions of carbon dioxide. Dr. William Happer, professor of physics at Princeton University, holds a different view. Happer addressed the John Locke Foundation’s Shaftesbury Society in 2014 on the theme “The Myth of Carbon Pollution.” Happer also discussed the issue with Mitch Kokai for Carolina Journal Radio. (Click here to find a station near you or to learn about the weekly CJ Radio podcast.)

Kokai: Anyone who has heard anything about this debate on global warming or climate change has heard about carbon, carbon emissions, and the dangers involved. Why put together a presentation on the myth of carbon pollution?

Happer: Well, because it really is a myth, and carbon dioxide is good for the planet. And there was actually quite a nice op-ed in the Wall Street Journal [recently] that I recommend, by Matt Ridley, on the same topic. I could have written it myself. I completely agree with it.

Kokai: Carbon dioxide — those of us who are old enough to remember learning about this in our younger years — this is the stuff that we put out after we take in the oxygen.

Happer: That’s right. Our breath when we exhale is about 40,000 parts per million carbon dioxide, 4 percent. And you probably remember from high school chemistry, you can blow through a straw into limewater, and you get this cloud of white carbonate particles forming. So it’s a perfectly natural thing, and, in fact, we’re in a bit of a carbon dioxide famine now.

If you look over geological history, it’s been much higher than now most of the time. Most plants do better with more carbon dioxide than they have now. So it’s just a complete distortion of the truth to call it a pollutant. It’s not a pollutant at all.

Kokai: When did this start becoming a pollutant, and not just the naturally occurring material that we all heard about growing up?

Happer: I think it began to get legs in the ’70s and ’80s. There was an Academy of Sciences report by [Massachusetts Institute of Technology professor Jule Gregory] Charney in the ’70s, and then it got latched on[to] by green politicians. [Former Vice President] Al Gore is a person who comes to mind, but there are many others. So people saw a way to make a buck in demonizing CO2, and that’s what’s happened.

Kokai: Your presentation goes into the science. What are some of the things that people should know that would help them realize that this myth of carbon pollution is, in fact, a myth?

Happer: One obvious thing is that greenhouse operators — you know, who grow tomatoes, flowers — intentionally increase the CO2 concentration in the greenhouse by factors [of] two, three, four. And you have to pay to do that. You have to pay for the CO2, but it’s still worth doing it because the plants grow so much better with more CO2.

Another thing they might want to look at is satellite pictures of the Earth over the last 20 or so years, where we’ve had good satellite observations show[ing] a clear greening of the Earth. And most of it is probably from the little bit of additional CO2 we’ve produced since that time. It’s not a lot, but it’s been enough that the plants have noticed it.

So the Earth will be a much better place if we double or triple the CO2. The worry has always been, well, it will make it intolerably warm. … If you look at the results of computer models and what has been observed in the last 10, 15, nearly 20 years now, warming has been much, much less than predicted.

So there’s clearly something seriously wrong with the computers that predicted this huge amount of warming, and that was already obvious from looking at paleoclimate data. Climate in the past, when CO2 fluctuated, didn’t follow CO2 at all.

Kokai: In looking at the facts that surround this, people who study this, who know the facts, why is it that that argument has not already [been] thrown out — the argument that carbon is a pollutant and it’s causing all these great problems?

And so it’s money once again, you know, driving crazy things. I think there’s a lot of misinformation. Most people are too busy to try and learn about the real facts, so they have to listen to the mass media. The mass media has really shamefully fallen down on the job. They don’t try to even give a balanced story. Quite the contrary.

But this has happened before. In the Soviet Union there was a period of nearly 30 years when you couldn’t claim that you believed in genes. There was this crazy guy, [Trofim] Lysenko, who said that genes were a capitalist plot. It’s all imperialism, and there were no such things as genes. We didn’t need genes in a socialist economy.

And if you believed in that, you know, you lost your job, and several people were actually sentenced to death and indeed died for saying what was obviously true — that [Gregor] Mendel was right, there really are genes.

Kokai: You reference the Soviet Union, and that’s interesting because a lot of what we’re hearing in the climate debate seems to be this effort to crowd out anyone who isn’t going along with the popular line. As a scientist, how dangerous is that for science, when you shut down these naysayers or alternate views?

Happer: Certainly the Lysenko affair in Russia was the worst that I know of in my lifetime. But there have been others. For example, the Catholic Church made an issue of the Copernican astronomy that the Earth goes around the sun. It was not an issue they had to make. It was made by some dumb people. It caused a lot of damage to the church, which didn’t need to occur. Many people realized in the church that Copernicus was right, but they had these show trials of Galileo. And so it seems to be part of the human condition that we sort of go crazy from time to time and get off on these cults.

Kokai: But people who are not scientists and haven’t spent the time that you have looking at this issue should just keep in mind that this idea of carbon dioxide or carbon in general as a pollutant is just a myth.

Kokai: And what would be the best way for people to get an easily accessible way of checking out the myth?

Happer: You know, there are a number of good books that you can get. One very good one was written by Matthew Ridley himself. Ridley is an interesting guy. His ancestor, Nicholas Ridley, was actually burned at the stake in Oxford in, I don’t know, 1555 or something like that, along with Hugh Latimer, for heresy. It was some issue about theology, you know, which Mary Tudor didn’t agree with. So I recommend Ridley’s book, for example. There are many others equally good.