Friday Interview: The Promise and Peril of Shale Gas 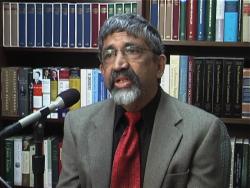 “Shale gas has the potential to materially improve the economic lot of every citizen of the U.S.” Dr. Vikram Rao, executive director of the Research Triangle Energy Consortium, used that sentence to begin the final chapter of his recent book Shale Gas: The Promise and the Peril. Rao discussed hydraulic fracturing, or fracking, for shale gas during a conversation with Mitch Kokai for Carolina Journal Radio. (Click here to find a station near you or to learn about the weekly CJ Radio podcast.)

Kokai: Fracking has been a topic of immense interest here in North Carolina. You write in this recent book that shale gas — fracking for shale gas — “has the potential to materially improve the economic lot of every citizen.” How so?

Rao: Well, cheap energy raises all boats of economic prosperity. And shale gas is a form of cheap energy that is relatively new, and it’s so low in cost, that it’s already shown itself. So, for example, in the last winter, as reported in the press, each family saved about $1,000 on heating alone, probably mostly due to the fact that the shale gas was cheap, but also perhaps due to the warm winter. But $1,000 in savings per family is a big deal.

Rao: There are a number of states in the U.S. that are currently profiting from shale gas. The folks who probably did it the earliest are Texas and Louisiana. Now North Dakota is one of the few states in the nation in black ink for the state. And a lot of that is due to, in that case, shale oil with some associated gas. So there’s been a lot of prosperity created. Pennsylvania has had some difficulties. They have hit some roadblocks. But if you look at the net economics as reported, their general economic picture is much brighter due to shale gas.

Kokai: Your book is titled, as we mentioned, Shale Gas: The Promise and the Peril. So we’ve talked a bit about the promise, but we do need to keep some factors in mind beyond just the dollar signs, don’t we?

Rao: Right. Shale gas has certain unique — well, the exploitation of it — has certain unique roadblocks that you can hit. They are primarily in the area of water. So each well will consume … up to 6 million gallons of fresh water. And so, especially in drought-stricken areas, that can be an issue. Besides that, no matter if you put fresh water down the hole, what comes back is very salty. And so you can’t simply discharge it. That is not appropriate. So you have to do something about it, and proper handling of that is an issue.

And then, finally, some people have reported that methane intrusions into drinking water have happened. The rather [inflammatory], if you will, Gasland documentary and these sorts of splendid examples, no matter how few they might be, have got into the public and have created concern.

Kokai: Before we started the interview, you mentioned that there’s been a lot of discussion on topics that are either off point or not cognizant of the actual facts of the situation. What’s one of the biggest myths about shale gas or fracking?

Rao: Probably one of the biggest myths is that fracking is responsible for flaming faucets, if you will. It’s well-known that there are natural gas incursions into freshwater from natural circumstances; this is well-known. So if somebody publishes something to the effect that there is a methane intrusion in freshwater, they have to show a baseline. Otherwise, it really isn’t proven because it might have been there in the first place.

So there are some very simple remedies to all of this. One remedy is that before you actually do any drilling, you do baseline testing of nearby water wells. And this is very straightforward.

Kokai: North Carolina is looking into this process, and I understand that you’re playing a role as this is moving forward. How has the state done so far in this early stage in addressing shale gas and the proper way to move forward with it? Are we on the right track in terms of how we’re addressing it? Are there some other things that we need to do?

Rao: This is a good point for me to point out that my remarks here are as an individual, not as a member of the [North Carolina] Mining and Energy Commission. So going back to your question, the legislature has given instructions, which I think are pretty comprehensive. While they have stated an intent to definitely have fracking — which by the way is not that big a deal, because every state in the union allows fracking, other than Vermont, which is a bit of a joke actually, because they don’t have any gas. This is like Texas outlawing maple tree sap production. So given the fact that fracking is permitted, [that] doesn’t really mean anything.

So I think that allowing fracking is perfectly fine. It does not necessarily mean that even it will happen. But at any rate, yes, the instruction that the legislature has given, I think is comprehensive and is intended to permit commerce while protecting the environment and the people.

Kokai: So those who are concerned about the environmental impacts of fracking should not necessarily think that the vote from the General Assembly has opened the door to environmental degradation? There’s lots of work still to be done to make sure that fracking is done in the right way?

Rao: I believe that if we have a proper regulation, and if we have industry cooperation, and if we have the right sort of local activism in the places where —“the right sort” meaning properly informed local activism — that combination will allow us, if we do produce shale gas here, will allow us to produce it in [an] environmentally correct fashion and in a way that does not spoil, not just the environment, but the livelihood of the people around it. Because there are some concerns about that sort of thing, like roads being damaged and so forth. So I believe that, with those three provisos, it is feasible, very feasible, to produce shale gas safely.

Kokai: Do you think 10, 20 years down the road, we’re going to see major changes, major positive benefits, thanks to shale gas, either here in North Carolina or nationwide?

Rao: I think I wrote an op-ed piece in [the Raleigh News & Observer] which basically said: Whether we have shale gas or not, we can profit from it. What does that mean? That means that we have neighboring states, and a pipeline comes straight down our state. And we could tap into it and have a chemical industry or a fertilizer industry or something which profits from it without our own production. Having said that, if we did produce it ourselves, then that would have a material advantage. Whether we’re likely to see that, we’ll have to wait and see.

People are not aware that the amount of information currently is really pitiful. There’s very little drilling that’s happened. So until there’s more exploration, I don’t think we can possibly know how much we have. The USGS [U.S. Geological Survey] estimates are based on such little data that they put very low probability in that, for the numbers are low. The numbers may or may not be low, but we’ll have to wait and see. But unless we allow fracking, nobody will come and explore. So I think the state deserves to know what we have, and more exploration will be needed for that.