Friday Interview: The State of Our Constitution 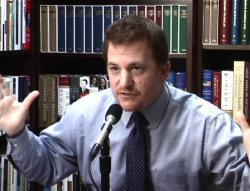 Much of the North Carolina Constitution dates back to 1776, but the document still has plenty of relevance today. That’s the assessment of Dr. Troy Kickler, director of the N.C. History Project. The History Project is working on a new series of events designed to increase knowledge about the state constitution. He discussed the issue with Donna Martinez for Carolina Journal Radio. (Click here to find a station near you or to learn about the weekly CJ Radio podcast.)

Martinez: When it comes to the constitution, there are some folks who say, you know what, this was probably important when our state was founded, but times change, and constitutions are essentially relics of the past.

Martinez: They’re not just gathering dust in the corner then?

Kickler: No, no. And one of the reasons we’re starting this project [The State of Our Constitution lecture series] is to foster state constitutional literacy among North Carolinians, and then also to foster an understanding of the importance of constitutions as a rule of law.

Martinez: Before we get more into the details of the lecture series itself — because it sounds really fascinating — let’s talk a little bit about the unique founding principles of the North Carolina Constitution. What’s in it, Troy? What would a North Carolinian learn, in terms of basic principles, if they were to read this constitution?

Martinez: That would surprise a lot of people.

Kickler: And the state constitution also forbids — and this is some of the Reconstruction language that is still in place in the ’71 constitution — it forbids secession.

Martinez: Ah-ha, in case we’re thinking about that!

Kickler: Right. It says that the state shall forever remain part of the Union. That’s Article 1, Section 4, I believe. And then other areas — the state constitution bans secret political societies. That’s leftover language from Reconstruction. Freedom of speech is guaranteed, but it says people, citizens, will be responsible for the abuse of freedom of speech. So those are some interesting, I think, interesting nuggets.

Martinez: And this document really lays out some rights and responsibilities that we each have as a North Carolina citizen, does it not?

Martinez: Tell us about this new lecture series, because it sounds really amazing. It’s called “The State of Our Constitution.” First of all, the North Carolina History Project — you are part of the John Locke Foundation — but you have a partner that’s working with you on this project. Tell us about it.

Martinez: And for folks who aren’t aware, former North Carolina [Supreme Court] Justice Bob Orr is the director of the Institute for Constitutional Law. He is going to be one of your panelists, one of the lecturers, as part of this series. Troy, when I was talking with him about this project, he said he really thinks that there are some people who really pay too little attention to the North Carolina Constitution and that it’s often misunderstood. Do you share those views?

Kickler: Yes. It is. As we talked about before, state constitutions are many times overlooked, and I think that is, in great part, because of the change in mindset of the American people, with the erosion of federalism in the United States. State constitutions are many times overlooked; they’re misunderstood. Yet they are more specific in nature, and so they can guarantee more rights than the U.S. Constitution does.

Martinez: You say “the erosion of federalism.” Just give us a brief summary of what that means.

Kickler: Federalism. Basically, what I mean is the chipping away of states’ rights in the United States — the federal form of government. And I think people’s mindset or their direction — they look to DC for answers to everything instead — their mindset is more national in scope than federal.

Martinez: Let’s talk a little bit more about the lecture series. Is this something, Troy, that the average North Carolinian would enjoy attending and [would] learn from, or is this specifically for attorneys and perhaps folks in the legislature?

Martinez: What would you hope that the average North Carolinian would learn and would walk away with after they attended one of these sessions?

Martinez: Three events over the next several months. You’re going to have one in Edenton [April 23, information here] and one in Raleigh. And the third?

Kickler: The third one, we plan to have in Salisbury.

Martinez: More information is available at the Web site northcarolinahistory.org. Troy Kickler will be one of the series lecturers, as well as Bob Orr of the North Carolina Institute for Constitutional Law, Raleigh attorney Gene Boyce, who is well known for his work on constitutional issues, and several other key folks around North Carolina.