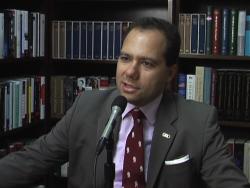 The U.S. Supreme Court could face another round of critical cases as it returns to work this month. Ilya Shapiro, senior fellow in constitutional studies at the Cato Institute and editor-in-chief of the Cato Supreme Court Review, recently traveled to Raleigh to discuss highlights from the last Supreme Court session. Shapiro shared his insights with Mitch Kokai for Carolina Journal Radio. (Click here to find a station near you or to learn about the weekly CJ Radio podcast.)

Kokai: The Hobby Lobby case was the one that really generated the most headlines. Just how significant was that decision?

Shapiro: Well, it was a big deal for religious liberty — one of the rare interpretations of the federal Religious Freedom Restoration Act that we’ve had — but it didn’t go to the heart of Obamacare. I don’t think it establishes a precedent that’s going to be applied in the future, because of the nature of the legislation that the court was interpreting — this Religious Freedom Restoration Act — that says that when you have a claim, a religious liberty claim, you don’t automatically win, but courts evaluate whether the government, nevertheless, has a compelling interest and is pursuing that in the only way that it can. There’s no other way to do it without burdening your religious liberty.

So the dissent there, Justice [Ruth Bader] Ginsburg, told a tale of a parade of horribles, of people objecting to vaccination or use of pork products — pig products — in medical devices. You know, people have been free to make those sorts of claims for about 20 years, since this legislation’s passage, and we haven’t seen it, and I don’t really think that it’s going to happen in the future.

This is really more indicative of the larger culture wars, and this season’s election campaigns, than any sort of revolution in the law or religious liberties being imposed on anybody.

Kokai: Now this was a decision that was split, like some of them are that we hear a lot of discussion about, but one of the other major decisions that came out near the end was unanimous, 9-0, and it had to do with President Obama and executive overreach. Tell us about that one.

Shapiro: President Obama’s executive overreach is kind of a theme that we’ve been discussing for a long time. … [W]hat the court was looking at in the case of Noel Canning v. National Labor Relations Board were some so-called recess appointments that the president made in January 2012. And the problem is, he didn’t make them during a recess or, better said, the Senate had what some people call pro forma sessions. They gavel in, gavel out every three days. Sometimes, they even conduct business during these sessions on a unanimous consent sort of fashion.

The lower court ruled that the president was exceeding the recess appointment power because it wasn’t a recess and it wasn’t an intersession recess, and the vacancy didn’t come about in the right time. The Supreme Court ruled more narrowly — at least the majority did — and said, “Look, whatever the rule is, three days is not long enough to invoke a recess appointment, and the Senate is the judge of when it’s in session and when it’s in recess.” So, clearly, Obama did exceed his powers.

Recess appointments are pretty much going to go away at this point, because the Senate — whenever the Senate is of the opposite party of the White House, they simply won’t go into recess, and indeed, the House now has more power because no house of Congress can recess for longer than three days, without the consent of the other House. So even if the Senate wanted to, it could not [recess] if the House is controlled by the other party. …

This administration, just at the Supreme Court, has lost unanimously 13 times in the last three terms. That’s a pace that’s triple George Bush and double Bill Clinton. So they push through the envelope of kind of reasonable arguments and reasonable executive actions.

Kokai: As you surveyed the range of opinions that came down during this past term, what were some of the other decisions that stood out to you?

Shapiro: Harris v. Quinn, which was decided on the last day of the term, the same day as Hobby Lobby, was a big labor law case. And this stopped in its tracks the biggest source of union growth, and especially public-sector union growth, that we’ve seen lately. To wit, Illinois is one of among about a dozen states that has had laws to forcibly unionize home health care aides and other types of independent contractors, who get paid through state program funds.

The SEIU, one of these unions, negotiated the Medicaid compensation rates, for example, for the home health care aides in this case, and the court said that’s not enough to make them state employees, which is really the standard that the court has allowed compelled unionization for.

But at the same time, the majority here — and this is another one of these 5-4 cases written by Justice [Samuel] Alito — did cast doubt that perhaps in the future there will be a further paring back of the laws of the jurisprudence that has allowed forced unionization in the public sector.

Kokai: Of course, in addition to all of these cases, one of the things that Supreme Court watchers look for is trends. Did you see any interesting trends that either developed or continued from previous sessions?

Shapiro: There is a great deal of unanimity on the court. I mean, this is kind of an increasing trend over the last number of years. It goes into what [Chief Justice] John Roberts has said, that he wants the court to speak with more of one voice. But here, in part, as I mentioned, President Obama has succeeded in creating bipartisan unity with, you know, a record number of unanimous votes against him, and indeed, overall the government has been losing much more than it has historically.

But, on the unanimity front, this term — about two-thirds of the cases were decided 9-0, which is a modern high — not seen since 1940. You take another handful of cases that were decided 5-4, that gets us [to] over 80 percent of the cases [that] were either unanimous or, you know, hopelessly split, 5-4. So it shows you that the cases at least that the court is taking are either really simple for the court to resolve, or at least they take narrow decisions that more people can agree upon, or they’re hopelessly split like in the civil rights area.

Kokai: That, I think, would surprise a lot of people to hear, that there is so much unanimity, when all you hear in the mainstream press about the court is that you’ve got a conservative wing, and you’ve got a liberal wing, and Anthony Kennedy can go either way. It doesn’t sound like that’s the way they really operate.

Shapiro: Most of the cases you never hear about. The bankruptcy law, tax code, ERISA, criminal sentencing — a whole host of very, very technical issues that sometimes the lower courts are split on or simply get badly wrong, and the Supreme Court doesn’t have much of a problem resolving it.

Some of these cases that have been unanimous, some commentators have called phony anonymity, in the sense that, yes, at the end of the day, all the justices agreed on which side won, but there were harshly worded concurrences that … were dissents in all but name, and Justice [Antonin] Scalia authored notable ones, including in that recess appointments case, Noel Canning, [and] an abortion clinic buffer zone case called McCullen. In these cases, the concurring justices — sure they agree in the judgment, but they don’t agree with the reasoning, and they would have gone much further than the majority would.

So there is a bit of that, but even in cases where all justices agreed on everything, or on most things, still we have a record … level of agreement. In part, that’s generally a good thing, I’d say, but in part, it’s because the court is — here’s another trend — declining a lot of the interesting and important cases that I think it ought to [take], in areas such as Second Amendment, federalism, certain First Amendment doctrines as they apply to broadcasters.

There’s a lot of very interesting areas that are frustrating, even more than the decisions that I would characterize as overly narrow. But the dog that didn’t bark—the cases they didn’t take are also a big story.