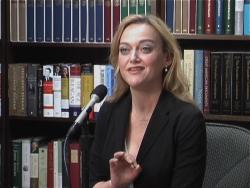 After the U.S. Supreme Court struck down an Arizona campaign finance law that allowed some candidates to receive rescue funds from taxpayers. North Carolina lawmakers and advocates sorted through the implications for the Tar Heel State. Jeanette Doran, executive director and general counsel of the N.C. Institute for Constitutional Law, discussed the issue with Donna Martinez for Carolina Journal Radio. (Click here to find a station near you or to learn about the weekly CJ Radio podcast.)

Martinez: First of all, what did the U.S. Supreme Court rule, and what is a rescue fund?

Martinez: And these are funds that actually come from public coffers. So taxpayer money is then given out to candidates for public office.

Martinez: What did the U.S. Supreme Court rule about rescue funds?

They applied the traditional test, and one component of that test is whether government has a compelling interest, and Chief Justice [John] Roberts wrote for the majority and was very clear that leveling the playing field is not a compelling government interest. It doesn’t justify stifling free speech.

Martinez: I am not an attorney, so let me see if I understand this. And you correct me if I’m wrong. Essentially, the court ruled that if you “level the playing field,” you could actually have a negative impact on someone’s right to free speech and free expression to support a political candidate, because they might fear that if they gave money, it would then trigger the additional money into the opposition’s campaign coffers.

Doran: Exactly. So it inhibits a person’s freedom of speech because the concern is, well, if I say something in support of my candidate, what I do as a consequence is indirectly support the other guy.

Martinez: I’m going to help you [the opposition] if I speak out for my guy.

Martinez: All right. So that’s what rescue funds are, and that’s what the Supreme Court ruled [last] year. Now, here in North Carolina, we have a rescue-funds provision in our law. So doesn’t that mean that it’s unconstitutional?

Doran: I think so. That’s certainly my interpretation. And one of the things that I think is really interesting is, in that Supreme Court decision from last year, there’s a footnote that explains that North Carolina and Maine have rescue-funds provisions that are substantially similar to the provision that they were holding unconstitutional.

Martinez: So we’re referred to in a U.S. Supreme Court opinion?

Martinez: … Jeanette, is there a requirement, then, that the legislature goes in and changes the law to strike down rescue funds? Or does the U.S. Supreme Court decision just automatically make our law void?

Doran: It makes it, I believe, unenforceable. But because the statute is still there — it’s still on the books — what the proposed legislation would do is, effectively, housecleaning — [a] housekeeping kind of measure, where it would remove that provision just so that there’s no dispute and we don’t have to keep going to court over it.

As long as it’s in the statutes, we run the risk that we’ll have to litigate this over and over and over with different parties, different candidates, different independent expenditure groups. So, it really is best practice for the legislature to repeal those obviously unconstitutional matching-fund provisions.

Martinez: That’s very interesting. Something you just said is “potential litigation.” So, even if there’s a U.S Supreme Court ruling, it would be possible, as long as a law continues to be on North Carolina’s books, for someone to go to court and say, “Look, this is North Carolina law, so hand over the funds.”

Martinez: Not that they would necessarily prevail, but they could file that suit.

Doran: Exactly. It would be a pretty frivolous suit, but I think we all know there are a lot of frivolous lawsuits out there.

Doran: We have a public financing scheme that’s been around now for about a decade. And it started with judicial races, and we’ve seen it spread into a few other races — Council of State, state-level races. We’ve seen local governments that are exploring public financing.

Martinez: Chapel Hill was involved in this, in Orange County.

Doran: Exactly. And we’re seeing that there’s a popular push for it, but there’s also a popular pushback because people recognize that there are significant First Amendment implications, and we value our freedom of speech.

Martinez: And yet, this cry from those who support public financing is, again, we need to level the playing field. Jeanette, you speak about these types of issues all across North Carolina. What do you say to those people who argue, “Look, in order to make this a competitive race, we have got to make sure that people have, essentially, the same amount of money because, otherwise, they can’t get their message out”? What do you say?

Doran: Government shouldn’t be in the business of running campaigns, and, really, these efforts to “level the playing field” not only don’t really level the playing field, they compromise the integrity of the process. People have, for centuries, very much valued the entire electoral process. And it’s up to the people to make the field level or not level.

Martinez: That would be interesting, wouldn’t it?

Doran: It would certainly be a change. But, you know, why single out the finances? And why trust government to level the playing field?

Report: Hospitals billed poor patients, even if they qualified for charity care