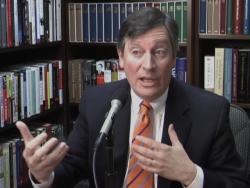 There’s much tradition associated with the office of president of the United States. That wasn’t true back in 1791, when the first president, George Washington, was serving his first term. Washington’s decision to tour Southern states that year set an interesting precedent for his successors. Warren Bingham’s book about Washington’s Southern tour of 1791 is scheduled for publication in 2014. He discussed his research with Mitch Kokai for Carolina Journal Radio. (Click here to find a station near you or to learn about the weekly CJ Radio podcast.)

Kokai: So 1791, you could write anything about George Washington, really, as the first president. Why did you decide that this was such an interesting topic to discuss in book form and in speeches?

Bingham: Well, Mitch, as a North Carolinian, I took note as a senior at UNC-Chapel Hill, from William Powell, who is a preeminent North Carolina historian, about Washington visiting our state. And at the time, even though I was a history major, George Washington still seemed almost like a mythical figure, not a real person. And it really got my attention when Professor Powell said that Washington was in, for example, Salisbury. I recall vividly, that got my attention because I grew up about 40, 45 miles from there, and it resonated. I said, “George Washington was real. He was in Salisbury.”

So some years later, when I wanted to develop some talks for mostly civic clubs, and as a hobby at the time, I thought, well, I’m going to research that topic. And as I did, I learned more and more about Washington’s travels. And we’ve always heard the thing about where he slept and so forth, which is sort of intended as a funny thing, but the truth is, Washington did get around the country like few others did at that time. And so that in and of itself is notable, that this person got around the country the way he did. And as president, he visited all 13 states in less than 2 1/2 years, in his first term.

And then I thought it was also striking that I learned that Washington never visited south of Virginia, except on this trip when he came to the Carolinas and Georgia. And that was in 1791. One footnote to that: I sometimes get called when I proclaim that. Washington was probably in the Dismal Swamp section in North Carolina in the 1760s, but that was hardly a proper visit to North Carolina.

Kokai: Now, in putting together this tour in 1791, what was the president’s motivation? He obviously could have stuck around the capital, done his business. This had to be quite an undertaking. Why do it?

Bingham: Mitch, the president wanted to see the people and get out and sell the new government. And he wanted to also, I think, understand the country. He wanted to understand the lay of the land. You know, he was an outdoor figure. He liked to understand what the soil looked like, what the terrain and the trees were like, and he wanted to understand the will of the people. And that way, I think he thought he could be a better president. So in that way he was being hands-on. And he also was essentially selling the new U.S. Constitution, which, of course, he was the first president under that Constitution, and so he was out wanting to promote it, promoting the new federal government, as well as getting some feedback about, well, how is it being accepted.

Bingham: Mitch, he struck out from the capital, which was then in Philadelphia — that was the temporary capital — and he left in the spring, in late March, right after Congress had adjourned. And so one of his first stops, I think listeners would like to know, is that he stopped in the proposed federal district, which we now know as Washington, D.C. Washington had been given great latitude about setting the specific site on the Potomac. Congress had said OK, it needs to be between the — I’m not even sure — the Great Falls of the Potomac and the Chesapeake. And so Washington was to nail down the site. And as it wound up, it was near Georgetown, Maryland. And then, literally, on this trip he stopped going south and going north, and tied down, as the old surveyor, what the corner points would be for the new federal capital.

From there, he went down, more or less, the fall line of Virginia, and came into North Carolina, at Halifax, where he spent his first night in North Carolina, and went through the coastal plain, winding up in Wilmington. And then he went down the Atlantic coast to Charleston, which was a big deal back then. You wanted to get to Charleston, which was a place of influence and affluence. And on to Savannah, Georgia, up to the Piedmont of Georgia to Augusta, which was the state capital. And he came back through the Piedmont of the Carolinas — here in North Carolina visiting Charlotte, Salisbury, Salem, which we know as Old Salem, Guilford Courthouse — this was pre-Greensboro — and then up back through central Virginia and on back to Philly.

Kokai: Now, we know today that any time the president goes anywhere, there is a crowd, there is media attention. From what I understand, anywhere that George Washington went, he attracted a huge crowd, too. Do you have information about how he was treated on this tour?

Bingham: I do. He was treated, in fact in some places, royally, which was a bit of a concern for some because, if you had concerns about us getting away from the royal trappings of England, sometimes George Washington, I think, baited some of that sort of thing. He liked a lot of the pomp and ceremony. So in places like Charleston and New Bern here in North Carolina, he was treated in such a grand way, it probably smacked of what people then, and even today, we might think as royal treatment. But it was a simpler thing in other places, say in Camden, South Carolina, and Salisbury, North Carolina, where he was treated quite warm, and in a very genuine way, with less ceremony. And Washington, in his diary, would write good things about both forms of treatment. He liked both. But he was treated very well. He was highly regarded.

One example — in Halifax, North Carolina, the home of Willie Jones, who was the leading opponent in North Carolina of the new constitution. Jones said there, “I’ll see him as a great man, but not as president of the United States. But I do hold him in high regard.” So Jones agreed to come to dinner with Washington and others, but would not receive him as president. So that was about as bad, so to speak, as it got for Washington. It was generally very good.

Bingham: Mitch, I think that’s a great question, and I believe it did. I think this entire thing of going to all 13 states, being seen by the people, getting with the people, and projecting that “I am the president, I represent your government,” I think solidified the whole idea of a president of the United States. But George Washington was just the one to get away with doing that and being successful at doing that, because he was the hero of the Revolution, and there was no one better regarded at all, throughout all the states, than George Washington.

Kokai: Is there any particular funny or unusual story that you learned in your research?

Bingham: There really are a good number, but probably one of the cuter stories is between present day Greenville and New Bern, I believe it was. Washington stopped for breakfast one morning, assuming it was a public inn. Because there was a lot of confusion about which was an inn and which wasn’t back then. And it turned out it was a private home. But they knew who he was. They put on a big feast for him. And at the end he went to pay the bill. He’d been there, I think, a couple of hours before realizing that he was in a private home. And he was very embarrassed about that, and so much so, that he kissed the lady of the house, I think to try to overcome it. That’s the old legend.