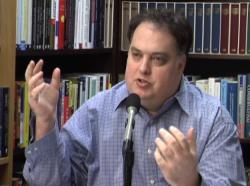 A North Carolina law passed in 2007 is creating pressure to build commercial wind turbines along the mountains in western North Carolina. That idea worries some environmentalists. But a 2009 report from the John Locke Foundation concludes that the solution to this problem is simple. Daren Bakst says the solution is to repeal the renewable energy mandate that’s part of Senate Bill 3. Bakst discussed this topic with Donna Martinez for Carolina Journal Radio. (Click here to find a station near you or to learn about the weekly CJ Radio podcast.)

Martinez: I’m a little bit confused because, aren’t environmentalists pushing renewable energy? And isn’t this push the problem that’s plaguing the mountain areas? So don’t they [environmentalists] have themselves to blame?

Martinez: Now, what has happened is that, a couple of years ago, Senate Bill 3, which was passed by the General Assembly, requires utilities to use more renewable forms of energy — wind being one of those. So is that essentially creating an artificial demand for wind power?

Bakst: Yes. We wouldn’t have large, commercial wind turbines being built in this state if it wasn’t for the fact that we have this mandate. What you have is this expensive, unreliable form of electricity. The utilities aren’t going to buy this form of electricity, and the only way that they’re going to is if you force them to. And that’s what Senate Bill 3 does — it forces them to buy renewable energy, and that puts a lot of pressure on having massive wind turbines on the mountain ridges in the mountains. And certainly on the coast as well.

Martinez: These can be monster structures.

Martinez: Explain what a wind turbine actually looks like.

Bakst: Well, they’re not those cute little Dutch windmills that you’re thinking of, I’m sure. They can be as tall as 500 feet — a 50-story building. And you don’t put one wind turbine along the ridge line; you have a line of them. You could have 50 wind turbines lining the ridges, and that would just be one wind farm. It would be like a massive metropolis, basically.

Martinez: I can understand why people who live in that area might not want that kind of visual in the mountains.

Bakst: I don’t blame them, but the key thing though is, we wouldn’t have to worry about it if it wasn’t for the fact that we have Senate Bill 3, because there wouldn’t be an incentive to build these turbines at all if you didn’t have this requirement. Nobody would make any money off of it. So if we got rid of Senate Bill 3, or that provision of the bill, we wouldn’t even be talking about it today.

Martinez: Have you been talking to legislators or any environmentalists about this pretty simple solution?

Bakst: We have, but it will be tough to try to repeal that provision of Senate Bill 3. There’s so much pressure for renewable energy.

Martinez: Well that’s an interesting topic, I think, Daren, because you’re saying it would be tough, yet would it also be fair to say that environmentalists have the ear of some of the state legislators who are involved in this?

Bakst: Yes. This state is a wannabe California when it comes to environmental issues. And I don’t know if we’re wannabe anymore; we’re getting pretty close to it. If you look at this — at the renewable requirement — half the requirement is met by buying electricity outside the state. So, basically we’re paying more in electricity so that we can buy the electricity for Texans and Californians. That’s basically half the requirement. The other way to meet the requirement is through biomass, and it has as many environmental problems as coal does, if not more. And then you have the wind issue, and let me tell you, people on the coast and in the mountains aren’t going to be too happy about it. So overall, I don’t see what is beneficial at all, regarding this requirement.

Martinez: Let’s talk a little bit more about the mountain situation because you write in your paper that there is a second element at play here, and this is something called the Ridge Law. So explain briefly. What is the Ridge Law and what role is that playing in this whole discussion?

Bakst: The Ridge Law generally prohibits the construction of tall buildings or structures on the mountain ridges. So, that would include these massive wind turbines. Now, the environmental groups would say that’s not true, that the big turbines are allowed, but any reasonable interpretation of the law would lead one to conclude — including the attorney general of the state — that these massive wind turbines are not allowed on the ridge lines. And what they did in the legislature was amend the Ridge Law to clarify what is allowed on the ridge lines. And what they did was, they actually, I believe, expanded the law to make it easier to have tall wind turbines on the ridges. Wind turbines that can be used for personal reasons, up to 100 feet, I don’t think that’s allowed under the law now, and in the Senate, what they did is, they passed a bill and amended the Ridge Law. They would allow these tall wind turbines — not the 500 foot ones — but the 100 feet turbines.

Martinez: So we sort of have dueling laws here.

Martinez: When it comes to wind power, we think of the mountains and the obvious visual blight, as someone would put it, that would be created if you put a 500-foot structure there — multiple 500 foot structures — but wind power is also getting some play over in coastal North Carolina. Are there any people concerned about it there?

Bakst: There are people concerned, and people on the coast should know, there is no Ridge Law for you, so there’s no protection at all. There’s a push to put the wind turbines on the coast, and realistically, that’s where we’ll probably see them — along the coast and even in the sounds. Who knows? Maybe even in the oceans, which is interesting, because the same people that will complain about offshore drilling, that you can’t even see, are the same people that want these really tall wind turbines maybe a mile or two off shore.

Martinez: Any reaction from the tourism industry?

Bakst: I generally think the tourism industry wouldn’t support something like that. But, I was at a meeting once where — I can’t remember who it was; it was probably some environmental group or someone from the state energy office — and he made the claim that, actually, it’s good for tourism to have these wind turbines. As if people are going to plan their trip and say, you know, let’s go to North Carolina to see the wind turbines. Forget going to Disney World; let’s go to wherever.

Martinez: Having lived in Arizona and driven through the California desert, where they exist, you just drive by them; you don’t stop and want to take a tour.