North Carolina’s legislative leaders want the incoming Trump administration to consider shutting down the $400 million, 104-turbine Amazon Wind Farm project under construction near Elizabeth City because, they say, the massive turbines would interfere with a nearby radar facility run by the military.

The request came in a letter to retired Marine Corps Gen. John Kelly, who is Trump’s nominee for secretary of the Department of Homeland Security. The Associated Press first wrote about the letter Friday.

The sophisticated radar receiver plays a key role in the military’s tracking of aircraft and ships suspected of transporting illegal drugs to the U.S. 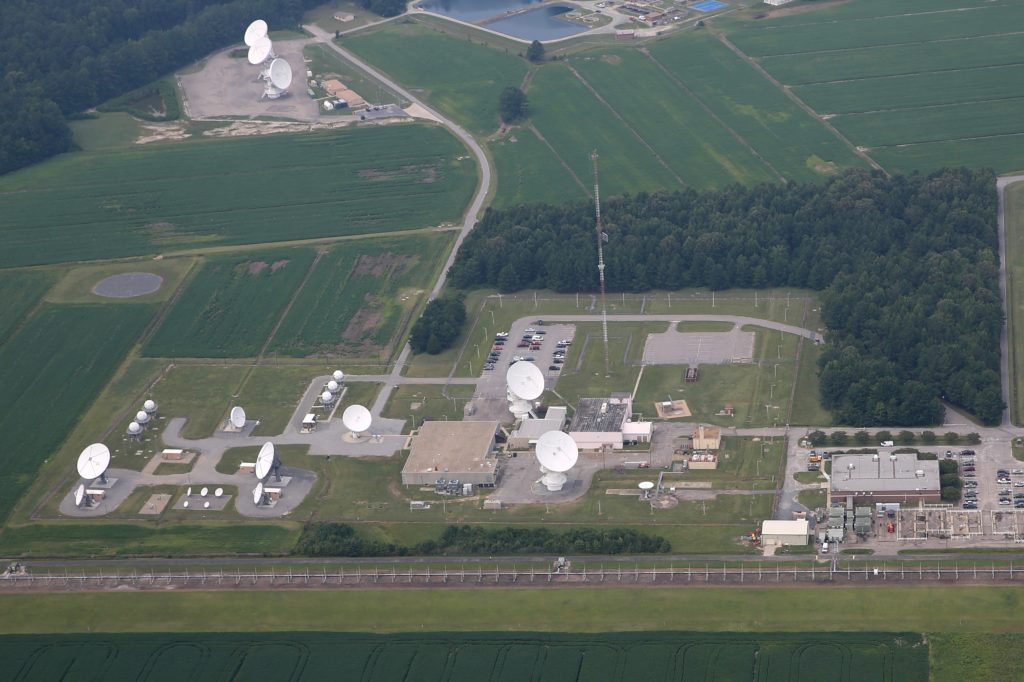 An aerial view of the Relocatable Over-the-Horizon Radar in Virginia. (CJ photo by Don Carrington)

Kelly was commander of the U.S. Southern Command from November 2012 – January 2016 and, in that role, oversaw all military operations in Central and South America and the Caribbean. The radar system provides critical surveillance capability to support the Southern Command’s program to detect and monitor drug-smuggling aircraft and ships from Central and South America.

“I know many legislators with diverse backgrounds and interests have been working for months on solutions to issues raised with wind permitting in North Carolina. I remain supportive of those efforts, just as I am a strong supporter of clean energy development and military communities in our state,” Moore said in a statement Friday afternoon.

“I believe a majority of the stakeholders involved are committed to keeping North Carolina an attractive state for clean energy development and military installations. We will work together on this complex issue to implement forward-thinking policies that accommodate the needs of our military service members and encourage energy investment in Eastern North Carolina,” Moore said.

Carolina Journal first reported on the potential conflicts involving the wind farm and the radar facility in September 2015. Kelly testified before Congress two years ago about the project, and that testimony was noted in the CJ story.

Avangrid Renewables, a U.S. subsidiary of the Spanish company Iberdrola, is developing the wind project. Online retailer Amazon agreed to buy the electricity and the naming rights.

In June 2012, the government’s ROTHR Program Office released a study concluding that a large-scale wind farm should be at least 28 miles from a ROTHR facility to prevent interference with the radar’s operation. The Navy released a map showing the “interference awareness area” in relation to the ROTHR receiving facility. The Amazon Wind Farm covers about 20,000 acres. It begins about 14 miles from the ROTHR facility stretching to a point about 22 miles away and is entirely within the 28-mile interference awareness area described in the 2012 study.

The letter outlines two options to deal with potential interference. The preferred option is permanently shutting down the project and compensating the developer, but for only documented costs to date but not for “future speculated profits.”

The second option would be to immediately make major changes to the agreement between the Department of Defense and the wind-farm developer. “Specifically the developer should be required to immediately shut down any and all turbines, when any more than a 5 percent degradation of the ROTHR signal is experienced due to any of this project’s turbines,” the letter says.

Under the current agreement, the Navy would “discuss strategies” with Iberdrola Renewables, the U.S. subsidiary of the Spanish company building the wind farm, should the installation adversely affect radar operations. The agreement, however, gives the Navy no option of terminating the project if the turbines compromise the radar facility’s effectiveness.

If the Navy detects an adverse impact from the operation of the turbines during the testing phase, the startup phase, or the operational phase, the parties will “confer with the assistance of a mutually acceptable technical expert” and discuss strategies likely to prevent problems.

The agreement says Iberdrola Renewables isn’t obligated to undertake any measures that it, by its sole discretion, “deems infeasible for any reason or no reason.”

Iberdrola Renewables’ effort to develop a wind farm began in 2009. The project stopped in late 2011 when three public utilities — Duke Energy, Dominion Energy, and Progress Energy — said they would not buy power from the facility because the rates Iberdrola would charge would be too high.

The project got new life when Amazon announced in July 2015 that it would buy the power produced by the wind farm and use it for its data centers in Northern Virginia.

But, as another CJ story noted, the centers would continue to buy electricity entirely from Dominion Virginia Power, the public utility that now supplies the Amazon data centers.

The power will be connected to the grid locally and can’t be plugged into the data centers, which are 200 miles away. The project is expected to be operational this year.

Plans for the wind farm include 104 turbine structures about 500 feet high. The company may add an additional 46 turbines. Initially, the facility would generate 208 megawatts of electricity, with a possible total of 300 megawatts if the additional turbines are added.

Gov. Pat McCrory, during the July 2015 groundbreaking ceremony, said: “The Amazon Wind Farm takes a significant step toward diversifying North Carolina’s energy resources. Bringing onshore wind production to North Carolina is part of my ‘all of the above’ energy strategy. By diversifying our energy resources, we can provide affordable, reliable, and secure sources of energy that are environmentally clean and safe.”