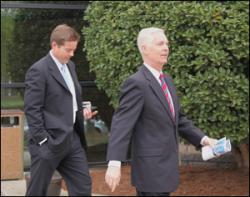 As federal prosecutors investigate alleged campaign finance violations and other suspected wrongdoing by embattled former Gov. Mike Easley, his law partners and other associates continue to play key roles in the management of the Golden LEAF Foundation, which distributes half of the state’s tobacco settlement money.

Since its founding in 1999, Golden LEAF has parceled out nearly $400 million in grants to North Carolina communities and business interests. Previous reports in Carolina Journal have detailed how the foundation has often operated as a political slush fund.

Two of the 15 members of the foundation’s board of directors — Ruffin Poole and Edgar Roach — work for the Raleigh office of McGuire Woods LLP, the law firm that now employs Easley. A third board member, John D. Merritt, left Golden LEAF earlier this year. Merritt, a senior vice president at McGuire Woods Consulting, the law firm’s lobbying arm, was Easley’s co-chief of staff.

And Dan Gerlach, a top Easley economic adviser, was named Golden LEAF’s president in September 2008. Media reports at the time stated that Easley had recommended Gerlach to the Golden LEAF board in June of that year.

Last week, Democratic political consultant Joe Sinsheimer asked Gov. Beverly Perdue to urge Poole, Easley’s general counsel, to resign from the Golden LEAF board. Poole was subpoenaed by the State Board of Elections to testify at the board’s recent hearing on Easley’s campaign finances. Poole had the subpoena quashed temporarily by a Wake County Superior Court judge for reasons that are not clear. The N.C. Court of Appeals later ruled that Poole will have to appear before the election board. The board has fined Easley $100,000 and referred the case to the Wake County District Attorney, believing that Easley and others may have committed crimes.

In his letter to Perdue, Sinsheimer said:

While Mr. Poole has a constitutional right against self-incrimination, it is disgraceful that a state appointee to a board as important as Golden LEAF would refuse to answer questions from another state board. Having already spent close to $400 million of state money and with another half a billion in its accounts, Golden LEAF should play a forceful role in the state’s economic future without North Carolinians worrying about unseemly corruptive influence. Golden LEAF’s work should be held to the highest ethical standards. Recent testimony from the State Board of Elections indicates that Mr. Poole does not meet those standards.

In July, federal prosecutors subpoenaed all communications between the state Department of Motor Vehicles and a number of people implicated in the Easley investigation, including the former governor, former First Lady Mary Easley, their son Mike Jr., businessmen Mac Campbell and his son McQueen, and former aides Poole, Merritt, Gerlach, and Freeman.

Among the projects receiving funding from Golden LEAF are a teapot museum in Alleghany County, horse parks in Hoke and Gaston counties, and a grant for UNC-Charlotte to study of the economic impact of auto racing on the state’s economy.

Golden LEAF also provided a $100 million grant to Spirit AeroSystems as part of a $240-million state incentive deal to lure the aircraft assembly operation to the Global TransPark near Kinston.

Yes, government can be shrunk