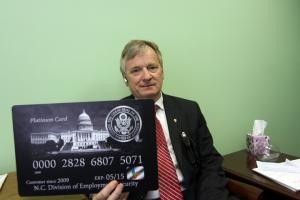 Employers now will have “certainty about the cost of doing business in North Carolina,” Gov. Pat McCrory said Tuesday in announcing that the state has paid off a $2.8 billion unemployment insurance debt to the federal government that he inherited upon taking office in January 2013.

The debt piled up when the state’s unemployment trust fund ran out of funds in February 2009, and soared to $2.8 billion at its highest point. North Carolina had to borrow from the federal government to pay regular unemployment benefits.

Senate President Pro Tem Phil Berger, R-Rockingham, said reforms in 2013 to House Bill 4, reducing the maximum weekly benefit from $535 to $350, and the number of weeks of eligibility from 26 to 20, have allowed the state to eliminate the debt.

“In just two short years, North Carolina has successfully paid off a massive federal debt that was threatening our ability to keep existing jobs and making it harder to create and recruit new ones,” Berger said.

He credited Sen. Bob Rucho, R-Mecklenburg, and Rep. Julia Howard, R-Davie, for “bringing stakeholders together to find a solution to remove this tremendous burden off the backs of North Carolina businesses and create a sustainable unemployment system.”

House Speaker Tim Moore, R-Cleveland, also credited the reforms in House Bill 4 with helping the state get rid of the debt during “a tough economy.”

The Republican-led policies to pay down the debt were not without detractors. The crticism grew louder in 2013 when the federal government refused to allow the state into the federal emergency unemployment compensation benefits program because North Carolina reduced benefits to pay down its debt.

“That North Carolina will pay off its unemployment insurance debt to the federal government, as Gov. Pat McCrory announced today, is a pyrrhic victory because the debt-free system — thanks to harsh benefit cuts and UI tax cuts — is no longer capable of being the stabilizing force both workers and employers need,” the union said in an e-mail release.

“Lawmakers should take action this session to reverse the draconian cuts they made to benefits and eligibility in the 2013 session,” said MaryBe McMillan, state AFL-CIO secretary-treasurer.

Dale Folwell, assistant secretary of employment security at the Department of Commerce, dismisses such criticism.

“When you look at the benefit costs of House Bill 4 up to this point, about half of it is borne by businesses paying higher [federal unemployment] taxes, and about half of it was borne by claimants who received less money,” Folwell said.

“In addition to the waiver we received last year, and with the news of today, and where we expect the [budget] surplus to be, the real story is that over a 15-month period this will result in over $700 million worth of tax savings in North Carolina,” Folwell said.

That will have a positive impact on the state’s General Fund, Folwell said, citing Austrian economics theory that businesses either would pocket and pay taxes on the savings, paying for services such as public education and roads, “or they could hire more people, which drives the unemployment rate even lower, which makes our trust fund even more solvent.”

Folwell noted that North Carolina paid off its federal unemployment debt faster than South Carolina, which owed a few hundred million dollars, Ohio owing over $1 billion, or California, with $8 billion in debt.

“North Carolina [unemployment] taxes were two and a half times higher than 42 other states” because of debt and the federal payback formula, and that was a disincentive to businesses looking to locate here, Folwell said. “Now there’s no longer a cover charge in North Carolina.”

The state also has been helped by other changes, including improvements in quality scores issued by the federal government.

“When the governor took office, not only was the debt the third highest in the United States, but our quality scores were the lowest in the whole country,” bottoming out at 12 out of 100 points, Folwell said.

“If that were equivalent to a sanitation grade [at a restaurant], which I think it is, you’d never eat there,” he said. “But people didn’t have a choice but to consume a product that had a quality grade of 12, so we’re excited about that progress.”

His department also implemented a photo ID policy requiring claimants to personally appear within four weeks of filing for benefits to prove the claim is not fraudulent.

“A photo ID is a federal requirement to get a job in the United States,” Folwell said. “Why shouldn’t it be a requirement for unemployment?”

The agency also added a week to the claims process during which the state verifies that the person in whose name a claim was filed was actually discharged. False claims had been on the rise due to identify theft and other reasons, but the changes stemmed the tide, Folwell said.