Republicans and Democrats held dueling news conferences Monday afternoon, trying to sway public opinion on the question of whether GOP Rep.-elect Mark Harris should be seated in the state’s 9th U.S. Congressional District.

More importantly, the parties will make their case in an actual courtroom Tuesday, as they attempt to persuade Wake County Superior Court Judge Paul Ridgeway on the merits of Harris’ claim that he should be certified in the tightly contested race. Harris said he’s ill and won’t attend the hearing.

An hour after the GOP news conference, N.C. Democratic Party Chairman Wayne Goodwin unleashed a counterattack, accusing Republicans of dishonoring Martin Luther King Jr. Day and the social justice legacy of the slain civil rights leader for whom the day is named. 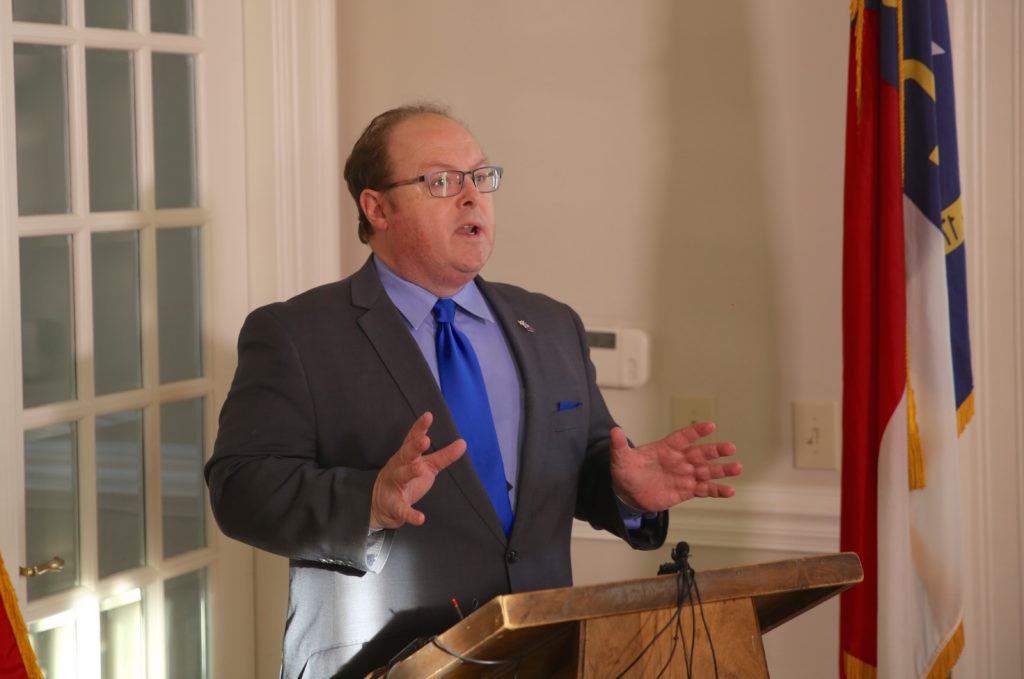 “Earlier today Republican officials again spun a false narrative based on wishful thinking and partisan politics. Mark Harris and the Republican Party are trying to brush aside black, brown, and poor North Carolina voters who were defrauded by the Mark Harris campaign,” Goodwin said.

He accused Harris and Republicans of attempting to steal the Nov. 6 election by illegally collecting absentee ballots, and again by filing a lawsuit.

“They are obstructing justice and trying to sweep under the rug systematic election fraud executed for the sole benefit of Mark Harris,” Goodwin said.

Woodhouse and Goodwin have not decided who they’ll nominate to the new five-member state elections board Gov. Roy Cooper will appoint Jan. 31. They have until Friday to submit recommendations. The new board is expected to call an evidentiary hearing based on the ongoing investigation of the elections board staff, and could order a new election if Ridgeway rules against Harris.

The U.S. House of Representatives has final say over who will join the chamber.

“I would be shocked if there is a certification of this election based on what we know now,” Goodwin said, “and even if a court were to order the certification of Mark Harris the Democratic leadership would not seat him.”

House Majority Leader Steny Hoyer, D-Maryland, has said Democrats would not seat Harris because of concerns about election integrity. Rep. Zoe Lofgren, D-California, chairwoman of the Committee on House Administration, has told North Carolina elections officials to preserve all materials used in their investigation for a possible House probe that could result in ordering a new election.

“It’s the same Congress that said elections should be decided locally, not in Washington, so I think that’s another smokescreen they’re throwing up,” Hayes told Carolina Journal after the press conference.

Hayes has spoken to Rep. Rodney Davis, R-Illinois, senior Republican on the House Administration Committee, about Democrats’ claims they will not seat Harris if he’s certified.

“He has an entirely different view, as does [House Minority Whip] Steve Scalise, about what Congress’ role is,” Hayes said.

Susan Mills, a Cumberland County Republican Party officer, said Harris’ team won the battle at the grass roots — knocking on doors, phoning voters, and posting yard signs. She said all county boards of election in the 9th District certified Harris as the winner.

Democrats have claimed Leslie McCrae Dowless, hired by Harris to help get absentee votes, and people working for Dowless, illegally filled in unmarked documents for Harris, and discarded those checked for McCready. Dowless has denied the accusations. Mills said no one has presented evidence substantiating the allegations.

Union County GOP Chairman Dan Barry said Malcolm and Jens Lutz, the Bladen County Board of Elections vice chairman who abruptly resigned after Harris’ election was not certified, had a troubling and central role in the situation. Malcolm admitted (after initial denials) he and Lutz communicated for months surrounding the election.

Malcolm said he had known of election irregularities in Bladen County for a long time. But no one alleged election fraud until McCready lost.

Stephens said Malcolm wanted to suspend Harris’ victory for an investigation, “yet other down-ticket races were decided by the same ballot and were certified.”

Goodwin acknowledged complaints about hundreds of absentee ballot irregularities in Mecklenburg County favoring McCready. He said that’s why a new state elections board must hold an evidentiary hearing.

“Whatever the facts are, let’s get to the bottom of it and stop the shenanigans, and this hyper-partisanship that the Republicans have in trying to close down what should be a transparent process,” Goodwin said.