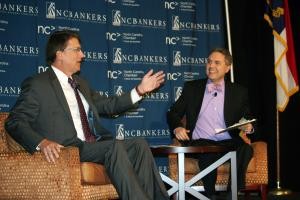 Gov. Pat McCrory on Wednesday hinted that after voters decide the fate of a $2 billion bond referendum on March 15, he might push for more bond money, this time for roads.

“Let’s get this bond passed in March and my goal is to get that passed in March,” McCrory, a Republican, said during the N.C. Bankers Association and North Carolina Chamber’s Economic Forecast Forum held at the Sheraton Imperial Hotel. “I think that will give a very strong signal for future bonds which I think we need for transportation infrastructure.”

He made the comments during a question and answer session with Tim Boyum, who hosts Time Warner Cable News channel’s “Capital Tonight” program.

McCrory had originally pushed for a bond package in $2.4 billion to $2.8 billion bond range, half of it going for transportation, and the remaining half funding facilities for state government and higher education.

However, last year the General Assembly, spurred by Senate leaders, reworked McCrory’s proposal. Lawmakers opted not to include any money for transportation in the bonds. Instead, they boosted annual transportation revenues primarily by eliminating the transfer of money from the Highway Fund to the General Fund to pay for the State Highway Patrol.

That funding now comes from General Fund revenues, such as sales taxes and income taxes, rather than gasoline taxes and Division of Motor Vehicles fees.

The $2 billion bond referendum on the ballot on March 15 would borrow money to pay for renovations and new facilities at the UNC system, the community college system, state parks, the N.C. Zoo, National Guard centers, and water and sewer improvements. None of the money goes for transportation projects.

While McCrory acknowledged the boost in highway funding approved last year, he said the new transportation money is not enough.

“One thing I learned as mayor and I know this as governor, if you react to growth, you’ve waited too long,” McCrory said.

Shelly Carver, a spokeswoman for Senate leader Phil Berger, R-Rockingham, responded to the governor’s call for additional debt by saying, “At this stage, we are focused on the March 15th bond vote.”

McCrory also discussed successes during his tenure as governor. He cited North Carolina’s continuing growth in employment, contrasting it with unemployment when he took office in January 2013, when the state had one of the nation’s five highest rates.

He noted that the most recent Census Bureau figures show that North Carolina now has more than 10 million people. “We’re the ninth most populous state in the United States of America,” McCrory said.

He said that having a booming population presents infrastructure problems. “I’d rather deal with growing pains than dying pains,” McCrory said.

McCrory also touched on other issues.

On a hot-topic issue in the Charlotte area, McCrory has asked the Charlotte Regional Transportation Planning Organization either to reaffirm its long-term strategy, which includes toll lanes on Interstate 77 north of Charlotte, or reverse its decision. He said that if they change their minds, it would put the state in a “very difficult position of cancelling contracts.”

McCrory urged caution on any further tax reform, saying the state first needs to measure the impact of tax changes enacted over the last three years. “I think we need to be more cautious and see what tax reform is working and what tax reform needs to be modified during the next two to three years,” McCrory said.

On the GOP presidential race and the upcoming presidential preference primary in North Carolina, McCrory said the state would become a “major player” in the process. However, he stopped short of endorsing any candidate. “I have a bias toward governors,” he said.