Pell Cooper has served on District Court in Nash, Wilson, and Edgecombe counties since 1999. His potential trouble is with the N.C. Code of Judicial Conduct for managing a limited liability corporation he and Roy created in 2012, along with two other LLCs. If the commission overseeing judicial conduct found such a violation, Pell Cooper could face formal discipline, including removal from office.

The judge, reached by telephone, refused to speak with Carolina Journal about his role with one company, Will Clark Properties LLC.

The Cooper brothers started Will Clark Properties to host a 5-megawatt solar energy facility on 40 acres of Nash County property. Carolina Journal reported on the solar project earlier this year. CJ continues to get little information from the governor and now his brother about the solar farm, and its confusing ownership trail, including questions about a Raleigh post office box once and perhaps still rented by Roy Cooper. The box is listed as the company’s point of contact by government agencies.

Pell Cooper listed his title as manager of Will Clark Properties LLC on annual company reports submitted to the N.C. Secretary of State for 2013 through 2018. Roy Cooper also was listed as a manager for reports submitted in 2013 and 2014.

The governor’s office has acknowledged a role in Will Clark Properties to CJ. On state ethics forms, the governor said he ended his relationship with the company in November 2014. But — among other things — the governor and his brother have refused to clarify how Roy Cooper divested his stake in the company, if any money changed hands, if others have a stake in the company, and how rental income from the properties they’ve listed on state ethics documents is distributed.

The N.C. Code of Judicial Conduct states judges “should not serve as an officer, manager, or director of any company.” An investigation started in 2009 by the N.C. Judicial Standards Commission led to the resignation of District Court Judge Bill Belk of Charlotte. Belk continued serving on two corporate boards after he took office as judge.

Belk challenged the finding, but in 2010 the Supreme Court agreed with the commission’s recommendations and ruled Belk could never serve as a judge again.

On May 9, CJ reached Judge Cooper by phone to ask questions about Will Clark Properties. Cooper said: “I have read your stuff. I can’t talk with you about this. Have a nice day.”

Then he hung up.

On May 29, CJ tried to speak with Judge Cooper specifically about the judicial conduct code and his role with Will Clark Properties. He did not respond to a message left with a court staff worker.

CJ discussed Pell Cooper’s situation with four retired judges. None would comment on the record.

Commission Executive Director Carolyn Dubay told CJ that state confidentiality laws prevent her from commenting on potential misconduct by specific judges. The commission will open an investigation if it receives a completed complaint — which can be filed on the commission’s website. It also may act on its own in response to a news story. Complaints and proceedings against judges are confidential under state law. They become public only if the Supreme Court decides to discipline a judge.

In 2012, while serving as N.C. attorney general, Roy Cooper agreed to lease a Nash County property he and Pell owned to Chapel Hill-based Strata Solar so it could build and operate a 5-megawatt solar facility. 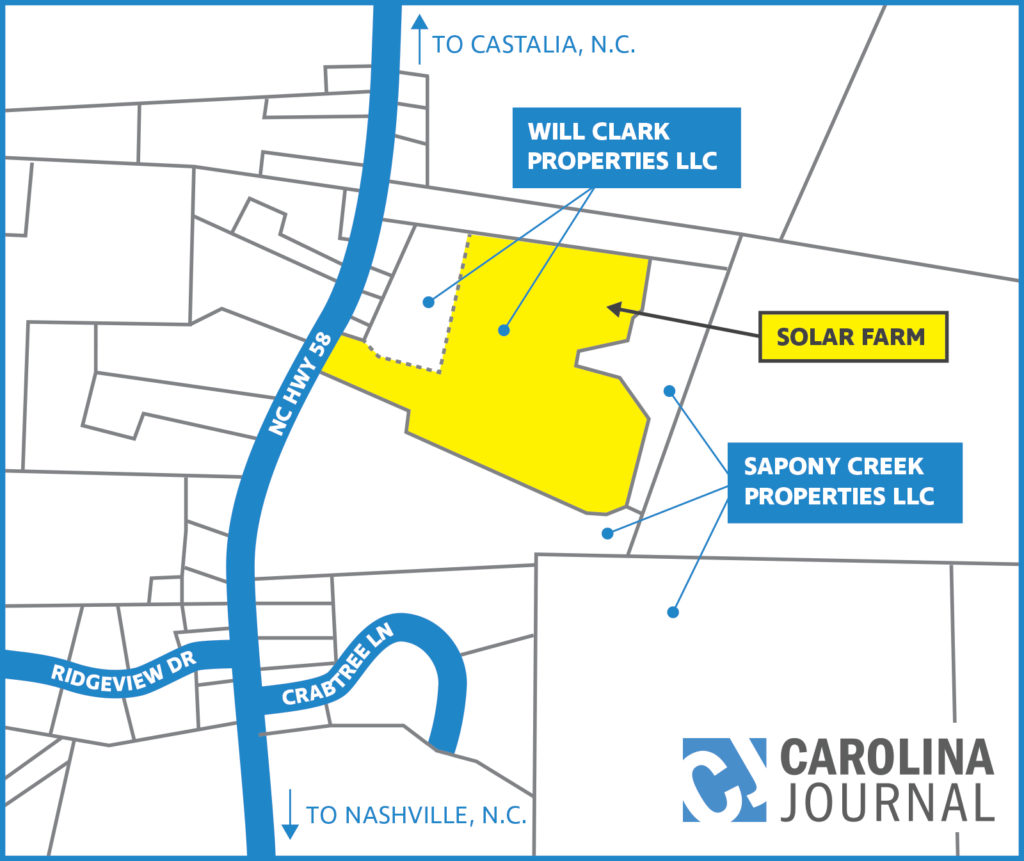 On Nov. 16, 2012, Nash 58 Farm LLC, a subsidiary of Strata Solar, submitted an application to the N.C. Utilities Commission for the 5-megawatt solar facility, on N.C. Highway 58 in Nash County, south of Castalia.

The application also stated, “Nash 58 Farm, LLC, will own the facility and will lease the site from Roy A. Cooper, III, the current owner.” Nash County property records show the land has been in the Cooper family since 1981 when Roy and Pell’s father, Roy Cooper Jr., acquired it. In 1996, the father sold the land to his sons and their wives.

The company’s named after William Fenner Clark, who owned cattle that grazed on the Cooper solar farm property before construction began. He also had cattle on his own nearby property. CJ tried to talk with Clark but was unsuccessful. Apparently he has no ownership interest in the company that bears his name.

The Cooper lease agreement isn’t recorded with the Nash County Register of Deeds, and the annual lease payments are not available to the public. A memorandum of lease, containing some of the lease details, is recorded. The document states the lease began January 2013 and continues to May 2034; it is renewable for two five-year terms.

The Nash County Tax Office estimates solar lease revenues average $800 per acre annually. Based on average rates, the Coopers’ facility would receive $32,000 a year or $960,000 over a 30-year lease. The Coopers may have received a different rate, but they won’t disclose it to CJ. Strata Solar has not responded to emails and phone messages from CJ asking about the Cooper lease.

P.O. Box 12181, at Cameron Village, is slightly less than a mile from Roy Cooper’s Raleigh home on Park Drive. Roy Cooper listed that post office box as his personal address as a manager of the Will Clark Properties on reports filed in 2014 and 2015.

CJ has contacted the governor’s office, attempting to get information about the mailbox. Those attempts haven’t succeeded.

[Editor’s note: After this story was published, Pell Cooper spoke with the Rocky Mount Telegram. He said the real estate operation he owned complied with the judicial code of conduct.]