Governor’s N.C. shutdown could last months depending on COVID-19 stats

North Carolinians face a few more months of at least partial isolation, based on recommendations Gov. Roy Cooper made at a Thursday, April 23, news conference.

The governor extended his stay-at-home order, imposed March 27 to limit the spread of COVID-19, from April 29 until May 8. Then he will decide whether to start easing restrictions gradually based on criteria he and state Health and Human Services Secretary Dr. Mandy Cohen spelled out at the news conference.

Cooper and Cohen based the guidelines loosely around recommendations announced earlier this week by the Trump administration. But the timetables put North Carolina at a competitive disadvantage with neighboring South Carolina, Tennessee, and Georgia. Those states either plan or have planned to relax some of their restrictions on commerce and mobility within a few days or weeks.

Cooper’s plan has the state gradually reopening businesses and social gatherings under a three-phase system. Perhaps after May 8. “It will depend on the facts and the data and the science” before the first phase of reopening begins, he said.

Officials are looking at trends of COVID-19 diagnoses, hospitalizations, daily tests, and stockpiles of personal protective equipment, among other things. As incidence of the disease flattens or declines, the phases would start kicking in.

Cooper and Cohen discussed their steps for gradually reopening using a series of slides. 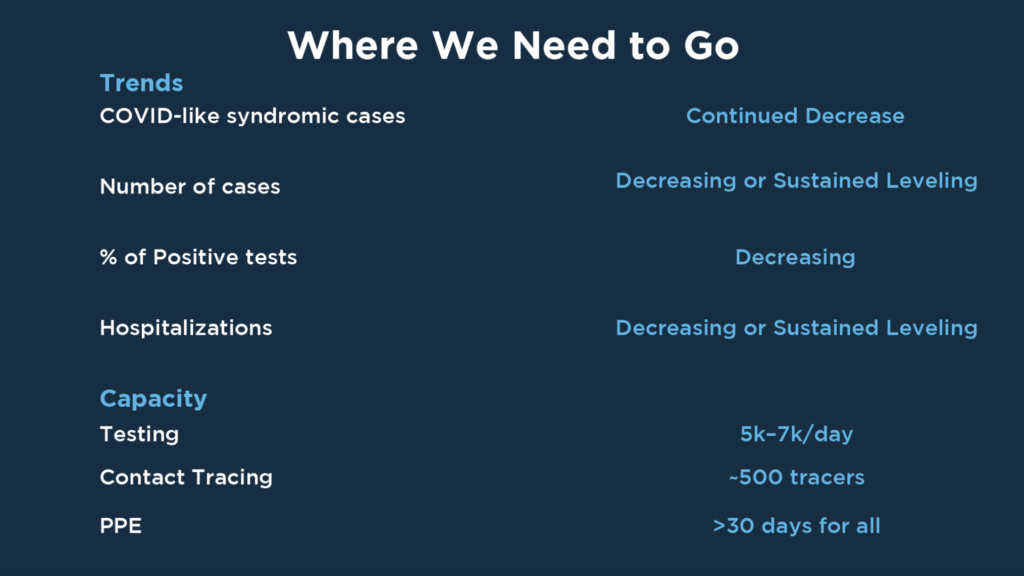 Under Phase 1, the stay-at-home order would remain in effect, but parks would reopen and people could leave their homes to buy a broader array of items, mainly at retailers. Social gatherings still couldn’t exceed 10 people. This phase would last at least two or three weeks, or until COVID-19 trends leveled or improved. 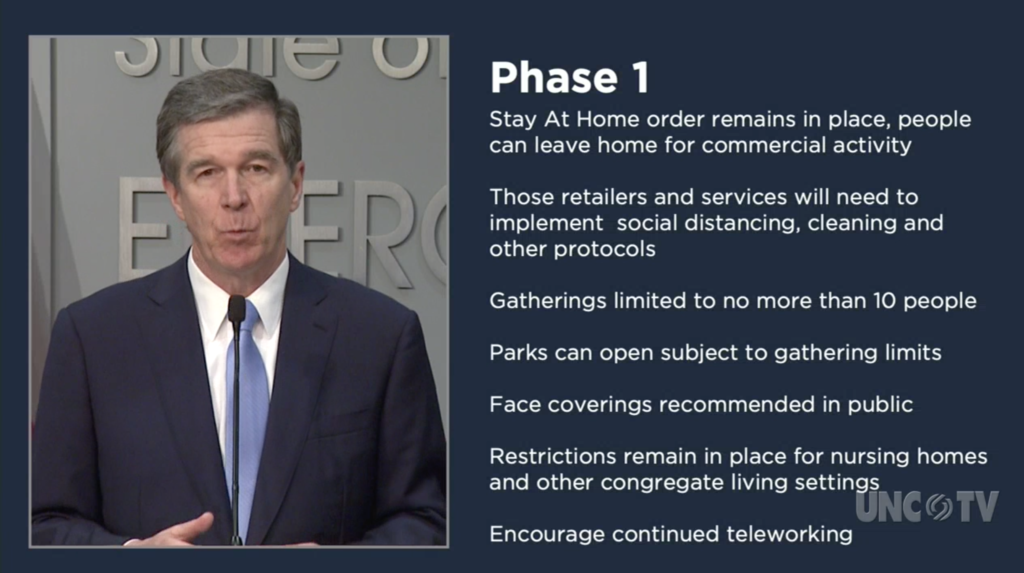 Phase 2 would start no earlier than May 23 and perhaps wouldn’t begin until June. Under it, the stay-at-home order would go away (but with people at risk of getting infected urged to continue isolation), and restaurants and bars could allow limited table service. Playgrounds, houses of worship, and entertainment venues could open under tight occupancy limits. So could gyms, pools, and hair and nail salons. Social gatherings could get larger.

This phase would remain in effect for at least four to six weeks … possibly past Independence Day. 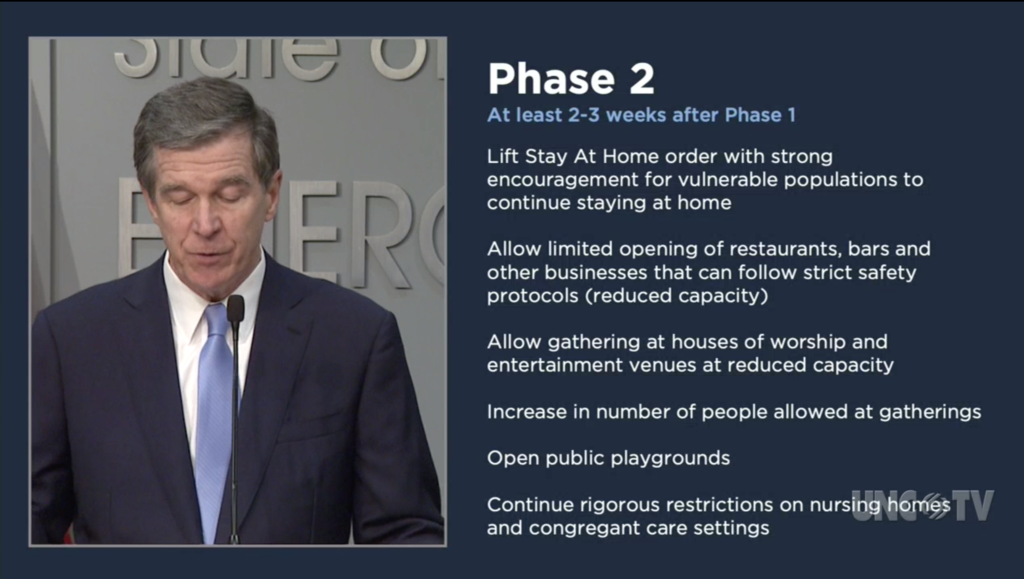 Phase 3 would further relax personal distancing requirements at venues open to the public. People at risk of getting sick would be expected to follow social distancing guidelines. 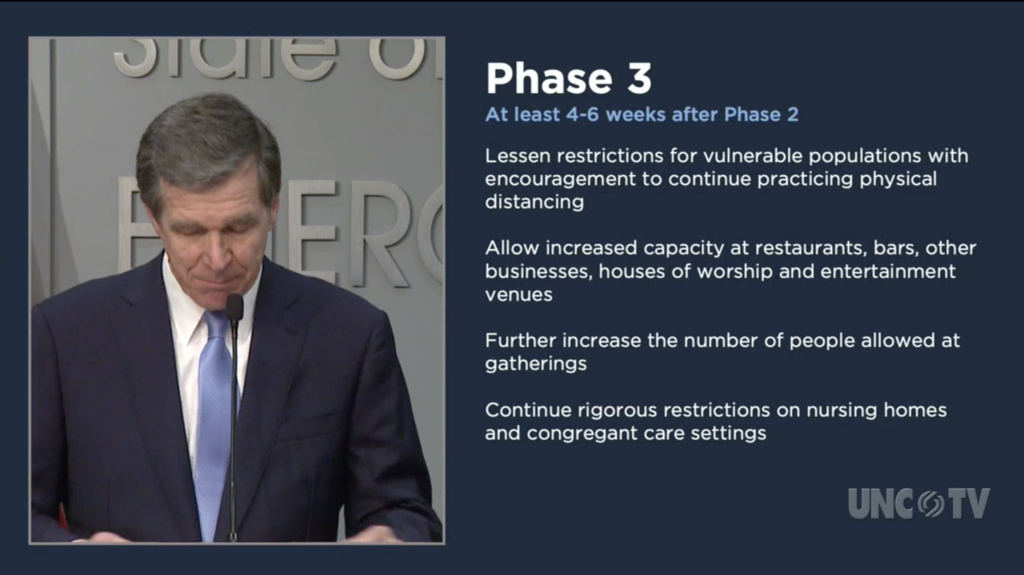 Lt. Gov. Dan Forest, who will face Cooper in the November election, criticized the governor’s decision.

“Governor Cooper’s one-size-fits-all approach for reopening is not necessary for a state as large as North Carolina. This decision will needlessly crush businesses and destroy livelihoods in places that don’t even have a single case of coronavirus,” Forest said in a statement.

“We shouldn’t be holding back counties that are ready to safely reopen. The governor should re-release the data he presented today at the county level so we can see which areas are ready to reopen without delay.”

The fact that we now have some detail is welcome progress, though reasonable people will disagree on the merits. Governor Cooper has extended the statewide restaurant closure through June 1, by which point many … small businesses will likely be bankrupt.
The Cooper administration did provide some details. I’m appreciative of that. For example, they provided more information on PPE stocks and testing capacity. They also made a commitment to be more transparent. …
I hope DHHS will follow today’s presentation with the promised transparency and the additional data that the public deserves to know.
Collaboration and transparency will yield better results than command-and-control. Hopefully, today marks a transition.

On Twitter, Sen. Warren Daniel, R-Burke, said these limits could spell an end to sit-down restaurants, gyms, and hair and nail salons in North Carolina.

Cooper said he would announce Friday whether the state’s K-12 schools would reopen this school year.

The General Assembly will open its short session Tuesday, April 28.