A stunning election night ended with several election races — including the contest for governor — unresolved, even as Republicans Donald Trump and Richard Burr scored significant victories and the GOP retained its supermajority status in the General Assembly.

In the race for governor, Democratic Attorney General Roy Cooper claimed victory just before 1 a.m. Wednesday, though he led incumbent Republican Pat McCrory by roughly 4,300 votes of more than 4.7 million ballots cast — 49 percent to 48.9 percent — with thousands of absentee and provisional ballots yet to be counted. McCrory earlier said he would work to make sure “every vote counted,” anticipating the race would not be decided until Nov. 18, when ballots are canvassed in each county and verified.

A rematch of the 2012 battle for lieutenant governor, in which Republican Dan Forest defeated Democrat Linda Coleman by 7,000 votes, was not much of a contest. Forest won a second term, 52 percent to 45 percent.

In the presidential race, Trump defeated Democrat Hillary Clinton by a 49.9 percent to 46.1 percent margin, winning the state’s 15 electoral votes and helping the New York businessman to an improbable victory, becoming the 45th president-elect. 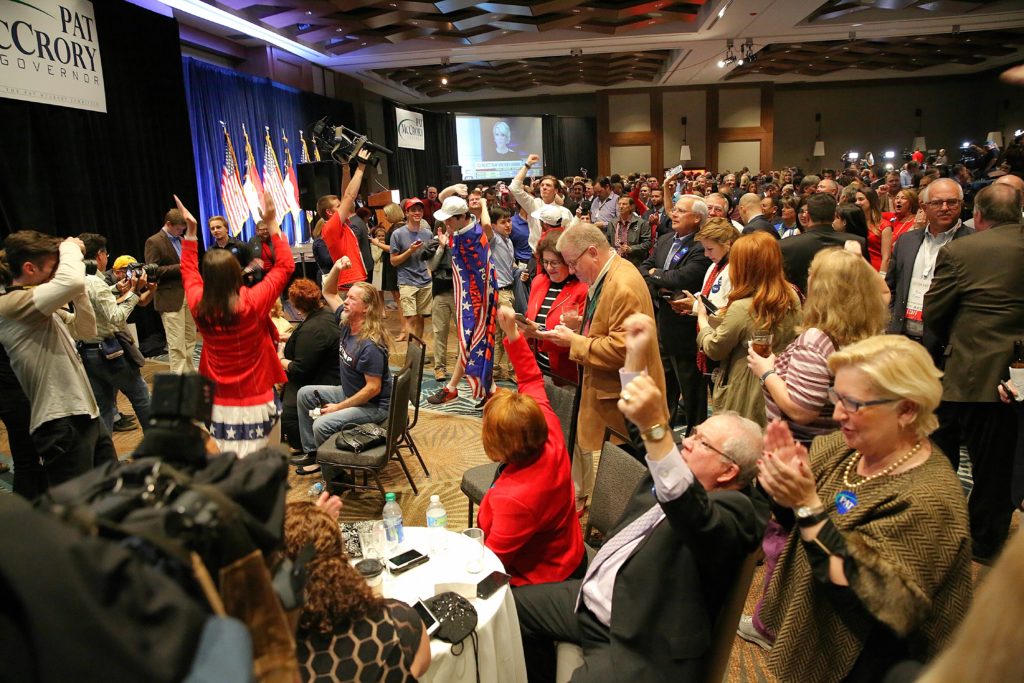 At the Republican victory party in Raleigh, supporters cheer the moment North Carolina was called for Donald Trump in the presidential race. (CJ photo by Don Carrington)

Burr, a two-term incumbent U.S. senator who confirmed at a victory speech in Winston-Salem this would be his final election campaign, defeated Democratic former state representative Deborah Ross, 51 percent to 45 percent, in a race that Ross led in polling as recently as early October.

Democrats also appeared to lose as many as three Council of State seats, depending on the outcome of the final vote canvass. Insurance Commissioner Wayne Goodwin was losing to Republican Mike Causey by 40,000 votes, and Superintendent of Public Instruction June Atkinson trailed Republican Mark Johnson by 56,000 votes. In the open race for state treasurer, Republican former state legislator Dale Folwell defeated Democrat Dan Blue III by a 53-47 margin. 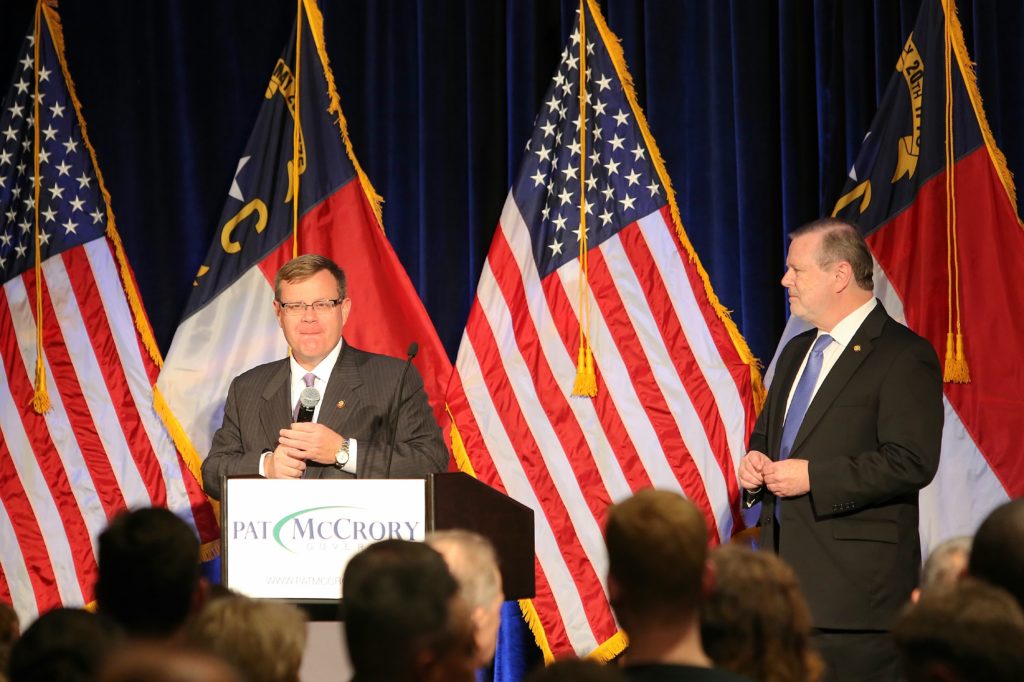 Republicans maintained their veto-proof majorities in both the state Senate and House, gaining a seat in the Senate while losing one in the House. If the results stand, the 2017-18 session of the General Assembly will see Republicans holding 35 of the 50 Senate seats and 74 of the 120 House seats.

Those losses were offset by pickups in districts that spanned the state. In the northeastern corner of the state’s House District 6, Republican Beverly Boswell narrowly defeated Democrat Tess Judge (appointed by local Democrats to take the place on the ballot of her husband Warren Judge, who died Sunday) by a 51.5-48.5 percent margin. The district was represented by Democrat-turned-Unaffiliated Rep. Paul Tine, who chose not to seek another term. Boswell’s win gave Republicans control of a seat Tine had won for Democrats in 2014.

Republicans suffered a setback on the state Supreme Court, as incumbent Justice Bob Edmunds lost to Democratic Superior Court Judge Mike Morgan by 9 points in a nominally nonpartisan contest. With Morgan’s victory, the Supreme Court will have a 4-3 liberal/Democratic majority.