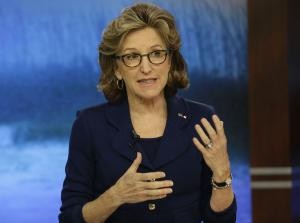 Democratic U.S. Sen. Kay Hagan’s account in Thursday’s Senate debate regarding ethics questions surrounding the $250,644 stimulus grant awarded in 2010 to JDC Manufacturing, a Reidsville-based company owned by her husband Charles “Chip” Hagan and his brothers, John and David, differed from a statement made last month by her campaign.

In the debate with her challengers, Republican Thom Tillis and Libertarian Sean Haugh, Hagan responded to a question from moderator Jon Evans of WECT-TV, saying, “I have no role in my husband’s business. I have a job that keeps me busy. … What I did ask was for my husband to get the opinion of an ethics attorney. He did so and the lawyer said it was appropriate.”

But in an earlier account of the controversy, published Sept. 25 by the Politico.com news service, Hagan spokeswoman Sadie Weiner said it was the senator, and not her husband, who had consulted with Washington, D.C.-based attorney Marc Elias of the Perkins Coie law firm about the matter.

In an Oct. 7 email, Carolina Journal asked Caitlin Legacki, a former Hagan speechwriter and press secretary, and who was cited by Politico as a spokeswoman for JDC, when Hagan had sought legal/ethical advice on the issue, and why the senator did not go to the Senate Ethics Committee for a legal opinion. Legacki, a principal at the Washington-based “crisis management” firm Precision Strategies, still has not responded.

CJ contacted Hagan campaign spokesman Chris Hayden earlier today, asking when Elias was contacted, what his opinion said, and if the campaign would share the contents of that opinion. Hayden has not responded to the email.

Perkins Coie, which has done work for Hagan’s political committee for several years, has billed the Hagan campaign committee for more than $155,000 in legal services during the 2014 election cycle, according to records from the Federal Elections Commission.

Kay Hagan abruptly left the WECT studios following Thursday’s debate and — unlike her opponents — did not take questions from reporters. An aide told reporters Hagan had to get on the road and had said all she needed to say during the debate.

More than a year ago, the law firm requested federal public records related to the four companies owned by Hagan family members involved in the federal stimulus grant, CJ has learned.

• JDC Manufacturing LLC was set up originally as a plastics recycling company, but its latest filing lists its business as real estate ownership and management. The three managers are Kay Hagan’s husband Charles “Chip” Hagan and Chip’s brothers John and David.

• Plastic Revolutions Inc. is a plastics recycling company that leases JDC’s building in Reidsville, which is where the stimulus-funded energy project was installed. John Hagan is the president and Chip Hagan is on its board.

• Solardyne LLC is a solar design and installation company that filed its articles of incorporation Aug. 9, 2010 — two days before JDC filed for the federal stimulus grant for which Solardyne performed work. Its 2011 annual report listed the managers as Chip Hagan and his son Tilden Hagan.

• Green State Power is the current name of Solardyne. Chip Hagan filed the name change in May 2012 with the state’s Corporations Division. A 2013 annual report lists as managers Chip Hagan, Tilden Hagan, and Will Stewart, Chip and Kay’s son-in-law.

A review of Freedom of Information Act requests shows that in 2013, Elias and other members of Perkins Coie contacted two federal agencies seeking public records on the Hagan companies associated with the stimulus grant. The grant originated with the U.S. Department of Energy, but the records requests were made to the U.S. Department of Agriculture. CJ has been unable to determine if any of the Hagan companies requested funds from USDA.

One request, made Aug. 19, 2013 to the Office of Budget and Program Analysis at USDA was completed Sept. 13, 2013, according to a request log. The attorneys were “Requesting any and all [records for] JDC Manufacturing LLC, Plastic Revolutions, Inc., Green State Power, and Solardyne, LLC.”

Another request was made Oct. 21, 2013 to the USDA’s Office of the Assistant Secretary for Civil Rights, seeking “All records relating to any applications for grants by JDC Manufacturing LLC, Plastic Revolutions, Inc., Green State Power, Solardyne, LLC.” The log shows that the records request has been closed, but it gives no date. CJ has not been able to obtain the requested records.

Elias also is the attorney that Hagan’s campaign reportedly consulted about the stimulus grant. According to the Politico story: “Once she learned of her husband’s dealings, Hagan never involved herself in his efforts to obtain the stimulus grant, her campaign said. She consulted with veteran Democratic attorney Marc Elias over the matter, according to spokeswoman Sadie Weiner.”

Elias represented Hagan’s political committee in dealing with an FEC complaint about the reporting of a contribution during her 2008 campaign for the U.S. Senate. The commission determined that “it appears that the committee failed to timely disclose by 48 hour notice contributions of $1,000 or more in violation” of the law. It cautioned the committee “to take steps that its conduct is in compliance with” the law. The commission voted March 10, 2009 to dismiss the complaint.

Hagan’s campaign spending report shows that, through the end of June 2014, over the current campaign cycle (spanning 2013 and 2014) her committee has paid the Perkins Coie firm $155,000.