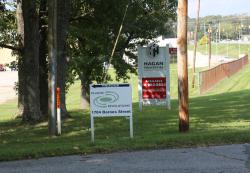 Carolina Journal requested access to the USDA file. It was delivered Wednesday.

The head of North Carolina’s USDA Rural Development office, Randall Gore, is the custodian of the information in the solar grant file. He was recommended for the position (which is a political appointment) by Hagan not long after she took office in 2009. Gore and Hagan live in Greensboro. President Obama nominated Gore and the Senate confirmed him.

According to the application (32 MB PDF), signed by JDC’S co-owner and Kay Hagan’s husband, Charles “Chip” Hagan, among the missing documents should be a “Copy of all estimates to calculate total project cost or Turn-Key Quote.” Those documents had to be included with the application before the USDA would consider awarding the grant, but they were missing from the file the USDA provided to CJ.

The missing documents — which also could include invoices, purchase orders, and work records — might explain the involvement of businesses owned by Chip Hagan, the Hagans’ son Tilden, son-in-law William Stewart, and possibly other family members in the installation of solar panels at the JDC building in Reidsville.

When asked about the omitted documents, Gore said in an email, “Please note that the information you have requested is part of the proprietary information that has been redacted.” When CJ followed up, asking if the redactions were made by JDC Manufacturing or the USDA, Gore did not respond.

Earlier, Gore had told CJ that it was his office’s policy to notify the grant recipient that an inquiry had been made and give the recipient an opportunity to object to a review of all or portions of the grant records.

From the initial reporting in late September by the Politico.com news service on the stimulus grant, Hagan and various spokesmen for the Hagan for Senate campaign or the Hagan businesses have insisted that the family businesses did not profit from an earlier $250,644 stimulus grant JDC received. Moreover, Hagan representatives have said a separate company founded by Chip and Tilden — Solardyne/Green State Power — received “no funding, public or private,” spokeswoman Caitlin Legacki said to WRAL-TV.

CJ reported that the company informed state officials that the budget for the stimulus-funded project had been revised downward by more than $114,000 and that the savings would be applied to the company’s share of the project. After CJ’s reports, company representatives contacted WRAL and The News & Observer with documents allegedly showing that the project in fact cost much more than the final budget filed with the state claimed. The documents presented to other media outlets are not part of the file at the State Energy Office, and JDC will not provide them to CJ.

JDC is a Reidsville-based real estate business co-owned by Chip Hagan and his brothers John and David. JDC was awarded the USDA grant a few months after JDC gained approval for a $250,644 federal stimulus grant to install new light fixtures, new furnaces, and solar panels at JDC’s building.

The USDA helped pay for what appears to be the second phase of the solar project. Green State Power’s website claims the company was involved in the installation of a 53kW solar panel array and an additional 58kW solar panel array on the building for Plastic Revolutions, a recycling business also owned by the Hagans that leases space in the JDC facility.

The USDA file (32 MB PDF) includes the application for the grant, documents spelling out the evaluation process used by the agency to approve the grant, and a request for funding for JDC. But — unlike the file of documents provided to CJ and other media outlets for JDC’s stimulus grant, it does not include invoices, time sheets, or work orders for the project.

Hagan family’s solar company originally was formed in August 2010 as Solardyne and Chip changed the name to Green State Power in May 2012.

CJ initially reported that Solardyne performed both phases of the solar installation primarily based on claims made on the company’s website. After reviewing the project file at the State Energy Office, it appears that the claims made on the company’s website were exaggerated or misleading. Even so, William Stewart performed some work on the project and Tilden Hagan had a significant role in the project.

The file on a separate $250,644 grant to the Hagan family was made available to reporters and it did contain detailed information on costs and actual expenses incurred by JDC Manufacturing.

Unlike the energy upgrades financed in part by the stimulus grant, which were intended to save energy costs by $100,000 a year for Plastic Revolutions and reduce carbon emissions produced at the building, the USDA file shows the $50,000 federal grant for the second solar panel project was intended to subsidize a project that would boost JDC’s net worth.

“This is a partnership involved in investment activities. JDC Manufacturing is investing in and installing a Solar PV System to produce green power to sell to the local utility company,” the application says.

The $50,000 grant came through the USDA’s Rural Energy for America Program administered by the Rural Development office in Raleigh. It was used to pay for additional solar panels on the JDC building in Reidsville. Chip Hagan completed the grant request and submitted it to North Carolina USDA officials on June 13, 2011. USDA area specialist Lynn Straughan approved the grant the same day. Gore signed off on the project July 11, 2011.

According to the grant application, the total cost of the solar system would be $200,000 and JDC Manufacturing would provide $150,000 of the project’s costs.

The grant application did not mention the previous stimulus grant and the solar panels that had been installed on the building.

The solardynenc.com website domain was reserved and purchased Aug. 8, 2010 — the day before Solardyne filed its incorporation documents with the Corporations Division — by Tilden Hagan. Tilden used Kay and Chip Hagan’s home address in Greensboro as the site administrator’s address. Tilden also registered the haganforsenate.com and ussenatorhagan.com domain names from his parents’ home.