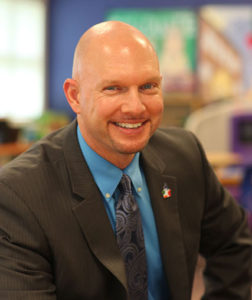 After months of searching, the North Carolina State Board of Education has hired a superintendent to help fix five of the state’s lowest-performing schools.

The board announced March 16 that Eric Hall will lead the state’s new Achievement School District, which was created last year by the General Assembly.

Hall has a background in educational nonprofit work. He serves as president and CEO of Communities in Schools of North Carolina, an organization that assists at-risk and low-income students.

Hall also has worked as the National Director of Educational Services for AMIkids Inc., a nonprofit serving youth in juvenile justice programs and non-traditional schools in nine states.

“North Carolina schools will benefit from Dr. Hall’s passion for students, teachers and building community partnerships,” said state Superintendent Mark Johnson. “Eric’s career focus has been centered on helping schools and students overcome challenges, and his leadership will be important in the years ahead.”

The ASD will place five schools from the bottom 5 percent of the state’s elementary schools into a special district. Under the supervision of Superintendent Hall, each school will be given more operational and academic flexibility — similar to the format of a public charter school.

House and Senate Democrats weren’t happy with the plan at the time of passage, saying it would allow private companies to exploit schools for profit.

Republicans said the plan was an escape for kids trapped in failing schools.

“I came to North Carolina because of my passion for students and ensuring success for each one regardless of their background or the barriers they face,” Hall said in a press release. “During my time at Communities In Schools, we have worked to reach students in poverty, students in rural and urban communities and students in non-traditional school settings with innovative wraparound supports. I look forward to taking my passion to DPI to build innovative solutions to education that bring communities together and propel students forward.”

The confessions of a judiciary junkie