Harris consultant says he should have been warned Dowless was trouble

Yates, founder of Red Dome Group, said he had full confidence in Dowless during the campaign. Now he doesn’t know what to believe after hearing testimony in a State Board of Elections evidentiary hearing about Dowless’ unusual methods of generating mail-in votes.

Yates cast himself as a victim who was shocked and disturbed to learn after the election Dowless had felony convictions for fraud and perjury. Had he known of Dowless’ criminal record, Yates said he would have recommended firing Dowless. If Harris had refused, Yates would have resigned.

Yates’ afternoon of testimony capped a day which opened with Bladen County elections board workers saying they viewed results from early voting before election day — a violation of state law. And disputed testimony about how many election workers saw and what they saw as they closed the county’s only early voting site on the last day of the early voting period.

The state board will determine whether to certify Harris as the winner of the nation’s last undecided 2018 congressional race, or to order a new election. Harris is expected to take the stand Wednesday morning. The hearing could extend to Thursday.

Yates said he paid Dowless with Harris campaign funds for get-out-the-vote efforts, placing workers at early voting and general election polling places, putting up and taking down campaign signs, and other election work.

Yates said he joined the campaign after Harris hired Dowless. Yates said he didn’t know how Harris generated so many absentee ballots.

McCready attorney Marc Elias focused on absentee returns from Bladen County, where Harris received 437 of 456 mail ballots cast and 452 of 661 in-person or early votes in the GOP primary. Yates attributed the lopsided total to a lack of interest in the county from Harris opponents — Clarence Goins and incumbent Rep. Robert Pittenger — along with Dowless’ reputation as an operative who can deliver absentee votes.

Even though more than twice as many ballots were cast in the November general election, Harris received only 420 votes by mail. Elias appeared incredulous when Yates said he hadn’t considered that figure to be unusually low until Elias pointed it out.

On Monday witnesses said Dowless orchestrated an absentee mail-in ballot scam that included signing and post-dating ballots as witnesses when they didn’t see the ballot signed, filling in unchecked candidate boxes, and collecting the ballots, all illegal acts.

“I worked too hard to build up Red Dome” to risk its reputation, Yates said. “I care deeply about the integrity of our democracy, and I’m not going to put up with that junk.”

He said he doesn’t believe Harris knew about Dowless’ questionable absentee ballot activities or the severity of Dowless’ criminal history.

Yates said he wasn’t overly concerned because Dowless was an elected official in Bladen County. Former Judge Marion Warren, who was director of the N.C. Administrative Office of the Courts, state representatives, and county elected officials vouched for Dowless’ integrity.

He said he cut off communications with Dowless after the State Board of Elections refused to certify the election, and details of Dowless’ past surfaced.

He said Republican Party Executive Director Dallas Woodhouse and officials at the National Republican Congressional Committee failed to warn him of Dowless’ sketchy past.

Much of Tuesday morning’s testimony centered around improper operations at the Bladen County one-stop early voting site, and whether that resulted in premature leaks of information or other unlawful behavior.

Poll judges ran the tape from their voting machines to tabulate vote totals on the last day of early voting. That isn’t supposed to be done before election day. 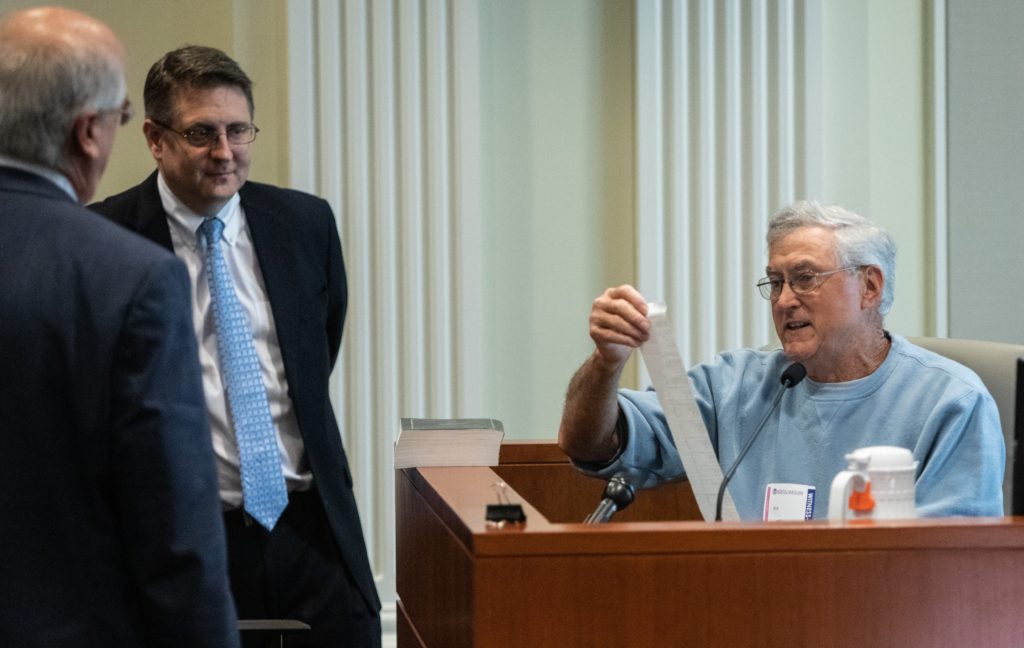 “Not on my watch,” Maultsby said repeatedly when asked if she saw or knew of anyone who looked at the vote totals of any election races. Edwards said he inadvertently saw the sheriff’s race totals as he took the tape out of the machine and signed it so Maultsby could put it in a lock box for safekeeping before turning it in to the Bladen County Board of Elections that day.

But poll worker Agnes Willis said Edwards and others looked at results of the sheriff’s race, which was of significant voter interest.

During her testimony it was revealed Willis might be involved in a parallel criminal probe. She admitted on the stand she served as a witness on about 10 absentee mail-in ballots while she was a poll worker.

“The results of this election were irretrievably tainted by fraud, and deceit, and cheating by Mr. Dowless, and the campaign he was working directly for, and the candidate who hired him directly, and with whom he was working closely,” Elias said.

“In 2016 they certified the races with absentee ballot irregularities, and the reason they did that was because Mr. Elias and his firm argued to that board that if the voter intent is preserved, technical irregularities should not disenfranchise the voters,” Dale said. No testimony has stated any voter’s choice of candidate was changed in the 2018 race, he added.