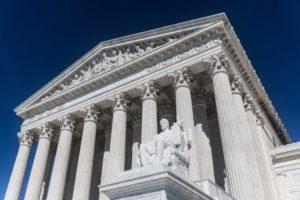 House Joint Resolution 286 would call on Congress to propose a “Keep Nine Amendment” to the U.S. Constitution. It would consist of one simple sentence: “The Supreme Court of the United States shall consist of nine Justices.”

The idea generated less than 10 minutes of debate before winning approval in the House Federal Relations and Indian Affairs Committee.

“I listen to the news media just like you and everyone else,” said Rep. Howard Penny, R-Harnett, a primary sponsor. “There’s a movement at the national level. You hear speculation of up to 13 [justices}.”

The current composition of nine justices dates back to 1869. “For 152 years it served us well as a nation,” Penny said. “The verbiage in this is a resolution to send to Washington. What Washington does with it is beyond our control. More or less, in my opinion, [the resolution is] for the state of North Carolina to make a stance and a statement that we want to keep this … U.S. Supreme Court at nine members, which has served us well.”

Two committee Democrats spoke against the measure. “I feel really uncomfortable with it,” said Rep. Vernetta Alston, D-Durham. “I don’t think the amendment is necessary.”

“I don’t think that there are any practical reasons to do it or any reasons that, frankly, aren’t political,” Alston added.

Rep. Raymond Smith, D-Wayne, questioned the resolution’s claim that an expanded number of justices would undermine the Supreme Court’s independence. “My question was how does it undermine their ability to be independent,” Smith said. “The number, in my humble opinion, of Supreme Court justices does not in any way affect their independence as a body. They still are a judicial branch.”

Twenty-five House Republicans have signed on to the resolution. It heads next to a House judiciary committee.

Congressional Democrats have filed a bill to expand the court to 13 members.