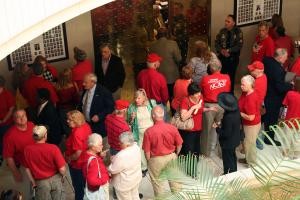 Red-shirted property owners flooded the General Assembly yesterday, as they did about a year ago, to put pressure on lawmakers voting on historic annexation reform. Only this time, the reform that passed is even more sweeping than last year’s version.

The original annexation reform legislation allowed property owners to reject involuntary annexation by cities if 60 percent of them mailed petitions denying it. Cities objected to the petition process, saying it disenfranchised renters in the area to be annexed, and a state superior court judge agreed, deeming it unconstitutional.

In response to the ruling, Republican lawmakers drafted new annexation reform legislation that replaced the petition process with a simple majority vote including all registered voters in the area to be annexed.

Additionally, they introduced a second piece of legislation reversing annexation in nine areas recently annexed by the six cities that sued the state. The cities won’t be allowed to attempt annexation of those areas again for at least 12 years.

When this second round of annexation reform passed the Senate last week, the N.C. League of Municipalities warned it would likely end city-initiated annexation in the state. The league claims such a move would hurt growth, economic development, and job creation.

More of those warnings came from Democratic lawmakers yesterday, before the House tentatively passed the two bills.

Rep. Jeff Collins, a Republican from Nash County, countered that if city governments made the deal attractive enough, they could annex property owners outside their borders voluntarily.

“You need to be able to sell the advantages of being inside your city,” he said.

The bills are expected to pass a final vote in the House on Tuesday.

While Gov. Bev Perdue cannot veto the bill de-annexing local annexations, it is unclear whether she will veto the broader annexation reform bill.

Dallas Woodhouse of Americans for Prosperity North Carolina told a crowd of “red shirts” to “burn up her phone line” Wednesday, when the bill will go to her desk.