The N.C. Supreme Court’s senior associate justice, Robin Hudson, will not seek re-election next year. Hudson announced Thursday that she will not run for another term. 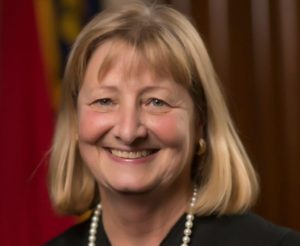 Hudson, 69, would have reached the mandatory retirement age of 72 in February 2024, little more than one year into an eight-year term on the bench.

“It doesn’t make sense to spend more than a year running in order to serve only 13 months of a new term,” Hudson said in a news release. “It also wouldn’t be fair to my family, my colleagues, and supporters to raise money and campaign under these circumstances. I would much prefer to spend my time devoted to the work of the court, without the distraction that a re-election effort requires.”

Hudson is a registered Democrat. After six years as a judge on the N.C. Court of Appeals, she was first elected to the Supreme Court in 2006. Hudson won re-election in 2014. Both elections took place when N.C. voters selected Supreme Court justices in officially nonpartisan races. Party labels returned to Supreme Court races in 2018.

With 15 years of service on the state’s highest court, Hudson is the senior associate justice. Among her colleagues, only Chief Justice Paul Newby has served longer.

Hudson has attracted attention in Carolina Journal’s “Extreme Injustice” coverage. That label refers to the idea the Supreme Court is considering to remove two Republican justices from hearing a high-profile case involving voter ID. In a column, CJ’s Dallas Woodhouse asked whether Hudson would go along with the scheme. Doing so would make Hudson the “Tonya Harding of the state judicial system,” Woodhouse suggested, referring to the American figure skater known primarily for the disgraceful end of her career.

Hudson’s Supreme Court seat is one of two up for election in 2022. Justice Sam “Jimmy” Ervin IV holds the other seat. Ervin, a Democrat, has said he will seek re-election.

Democrats hold a 4-3 majority on the court. If Republicans win either of next year’s Supreme Court elections, they would regain a majority the GOP lost in 2016.

On the Republican side, Appeals Court Judges Richard Dietz and April Wood have announced publicly that they plan to run for Supreme Court next year. Carolina Journal has reported that Trey Allen, a UNC School of Government professor and general counsel at the state Administrative Office of the Courts, is also considering a run for Supreme Court.