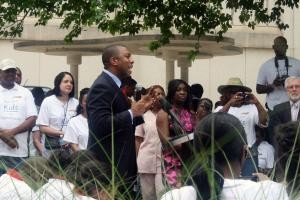 More than 1,200 parents and children — many of them black — rallied and marched outside the General Assembly Tuesday to support the proposed legislation, which could be introduced as early as this week.

Darrell Allison, president of North Carolina Parents for Educational Freedom, spoke at the rally, calling school choice one of the biggest civil rights issues of the 21st century.

House Majority Leader Paul “Skip” Stam, R-Wake, told the crowd gathered in Children’s Garden, across from the legislature, that he and other state lawmakers planned to introduce a bill this week that would provide opportunities for poor children to receive scholarships, up to $4,000, to be used for private education.

“It will not cost the state money,” Stam said. “It saves the taxpayers money, while at the same time providing tens of thousands of scholarships for children whose families earn up to about $50,000 for a family of four.”

The scholarships could be used for private school or home school. Eight states have similar programs in place.

Stam warned that because of the recession, scholarships wouldn’t be available to all eligible families at first, “but it’s a start.”

Allison said only half of the poor children in the state pass end of grade tests, compared to 80 percent of children who are not poor.

“We have more than 336,000 low-income students that failed end of grade tests last year, according to the Department of Public Instruction,” he said.

“That’s 336,000 children that look like these that are being failed each year,” he added, pointing to a group of black students.

A private school administrator from Asheville spoke, adding that the dropout rate for black males in her city is between 60 and 70 percent.

Allison called it an “academic genocide.” He said while he thinks public charter schools can help address the problem, there are only 100 currently in the state. There are more than 700 nonpublic schools in the state, he said, and they have the capacity and the ability to help low-income children.

“Parental school choice is one of the main civil rights issues that we have to address in the 21st century,” Allison said.

“If you’re wealthy in North Carolina, you have every educational option to make sure your child succeeds,” he said. “You’re probably zoned to a school that works for your child or, if not, you’re able to cut a $10,000 or $15,000 check to send them to a private school. Or you have a two-parent home, where you don’t need two salaries and one parent can homeschool.”

A group of private school students concluded the rally with a rendition of Martin Luther King Jr’s “I Have a Dream” speech.