Editor’s note: Please see update at the end of this report.

Gov. Pat McCrory is proclaiming the success of the tax cuts and job creation he calls the Carolina Comeback as reasons voters should award him a second term, along with a willingness to fight political opponents and even his own party to do what he thinks is right for North Carolina.

But Republican primary opponents Robert Brawley of Mooresville and Charles Kenneth Moss of Randleman downplay McCrory’s achievements. Both fault his judgment for supporting the unpopular toll road proposal for Interstate 77. 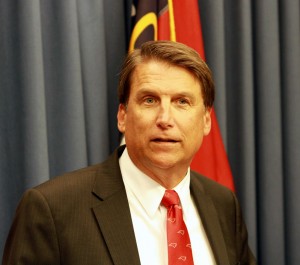 “I admire anyone who has the courage to run for office, including governor, both on the Republican and Democratic side,” said McCrory, of Charlotte.

He is the presumptive Republican favorite in the March 15 primary. McCrory is already assessing a Nov. 8 General Election contest against either Democratic Attorney General Roy Cooper or Durham attorney Ken Spaulding.

“I don’t think it will be any problem distinguishing myself” from the Democrats. “They are promoting a policy of basically … retreating” to the failed policies of the past, McCrory said.

They disagreed with personal income tax and corporate tax reductions he worked with the General Assembly to enact, “so I assume they want to raise those taxes back up,” he said.

“They’re involved with class warfare when in fact we’re creating jobs, and getting industry to create new jobs in small and large cities alike,” McCrory said.

“They want to expand Obamacare. They want Washington to take over North Carolina in so many regulatory areas. I’m fighting Washington,” McCrory said.

He said he will battle for the state’s interests, noting he has sued the Obama administration for imposing unnecessarily stringent clean air and clean water regulations, and the Republican-led General Assembly over a dispute regarding separation of powers. He called out the city of Charlotte over its policy allowing residents who identify as transgender to use opposite sex bathrooms.

He said he deserves another term because his administration has worked hard to reverse North Carolina’s stagnant economy, erase a $2.6 billion unemployment debt to the federal government, and support a Medicaid reform bill while shifting deficits that resulted from excessive spending to a positive cash balance in state coffers.

“We’ve done exactly what I said we would do, and that is change the status quo of government, create an environment in which the economy of North Carolina would start being turned around, fix some of the broken government in North Carolina, and to prepare this state for the next generation” with a $2 billion bond proposal, McCrory said.

“We’ve focused on [the Division of Motor Vehicles], we’ve focused on basic day-to-day operations for efficiency, we’ve reduced the number of state employees by several thousand employees, and yet increased services,” the governor said.

In a second term he would continue job creation policies that took North Carolina from the fifth highest unemployment rate in the nation when he took office to having one of the 20 lowest unemployment rates today, and implementing the Medicaid reform that the General Assembly passed.

He also to address mental health and drug addiction, which are “consuming the state budget, and nobody’s talking about it, and it’s destroying families,” filling jails, prisons, and emergency rooms, McCrory said.

Brawley, who served 20 years in the House, is ex-president of National Republican Legislators Association, and national Republican legislator of the year in 1995. He said he would reinforce Christian values and Republican principles of less government regulation and interference in private lives if elected. 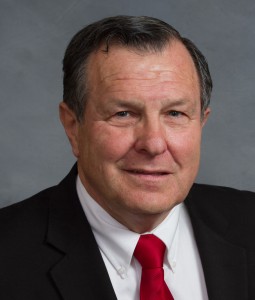 “I think there’s too much behind the scenes going on in government. I don’t think we’re getting the whole story,” Brawley said. “I can lead the state, and lead it with honesty, integrity, and transparency.”

Brawley is reluctant to provide the current mix of tax incentives to businesses.

“I guess the real question is how do you feel about the government deciding who succeeds, and who fails,” he said. While he supports tax credits that can be used when a company proves it has passed job creation or capital investment goals, he does not like refundable tax credits that lack those trigger mechanisms.

He opposes historic preservation tax credits that McCrory championed, saying, “I think if it’s worth restoring, if it’s worth keeping, somebody in the free enterprise system will take it on.” Yet he is not opposed to film tax credits.

Brawley supported creation of charter schools and home-schooling options as a state representative, but said they are not a panacea to fixing the state’s education system. He would like to see the state refuse to accept, or devise a way to replace, the $400 million education allocation from the federal government to keep Washington out of state school policies.

Brawley, who sad he ran afoul of the House Republican Caucus during his last legislative term for his staunch opposition to toll roads, said he knew all along he was right about the unfairness of a plan to charge motorists a toll to use a highway that their taxes paid to build.

He said utility companies have been “sheltered and protected” over coal ash environmental problems. “I just don’t think government decisions and how government operates should be affected by who made campaign contributions.”

Moss, a 77-year-old preacher and business owner who got 1.5 percent of the GOP gubernatorial primary vote in 2012, also said McCrory wrongly supported the I-77 toll road proposal. He said anyone who did a little homework would have realized the companies involved were not reputable or reliable. 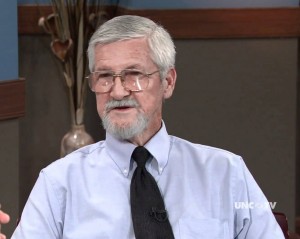 “I don’t agree with a lot of stuff that the Republicans have been doing. It’s creating a real hardship on a lot of people, and just tangled up in court just constantly,” Moss said, citing redistricting and photo ID lawsuits.

The voter ID law is a concern to students, he said, and many elderly people in rest homes who normally vote will not do so now because they won’t leave to get a photo taken.

He disagrees with the expansion of the sales tax into the service sector. “This is just another straw that broke the camel’s back,” he said, noting that a customer at his automotive shop who can’t afford a new car would have to pay sales taxes on labor charges for repairs in addition to the taxes already charged on replacement parts.

He disagrees with the corporate income tax cut from 6.9 percent to the present 4 percent. Money the state no longer is collecting should have been going to roads and school improvements. If a 3 percent decrease in tax rates were necessary to keep a company in business, it was not a healthy company to begin with, Moss said.

He opposes economic incentive deals to recruit businesses when longtime North Carolina firms only need a little boost. He would rather see community colleges and universities helping with research and development “to come up with something new to keep that company healthy.”

He is drafting a plan modeled after the GI Bill to make two years of community college free for students meeting grade and attendance requirements. Charter schools in K-12 are outperforming traditional public schools and forcing them to “step it up,” Moss said, but they have hurt low-enrollment schools in the mountains. Charters “need to be treated like banks and hospitals. Is there a need for them in the community?”