North Carolina public schools welcomed more new teachers from other states in 2015-16 than they lost to other states. The Tar Heel State has seen the same pattern for at least seven straight academic years.

A new John Locke Foundation Spotlight report highlights those numbers. The report also offers recommendations to help North Carolina do an even better job of recruiting and keeping the nation’s best teachers. 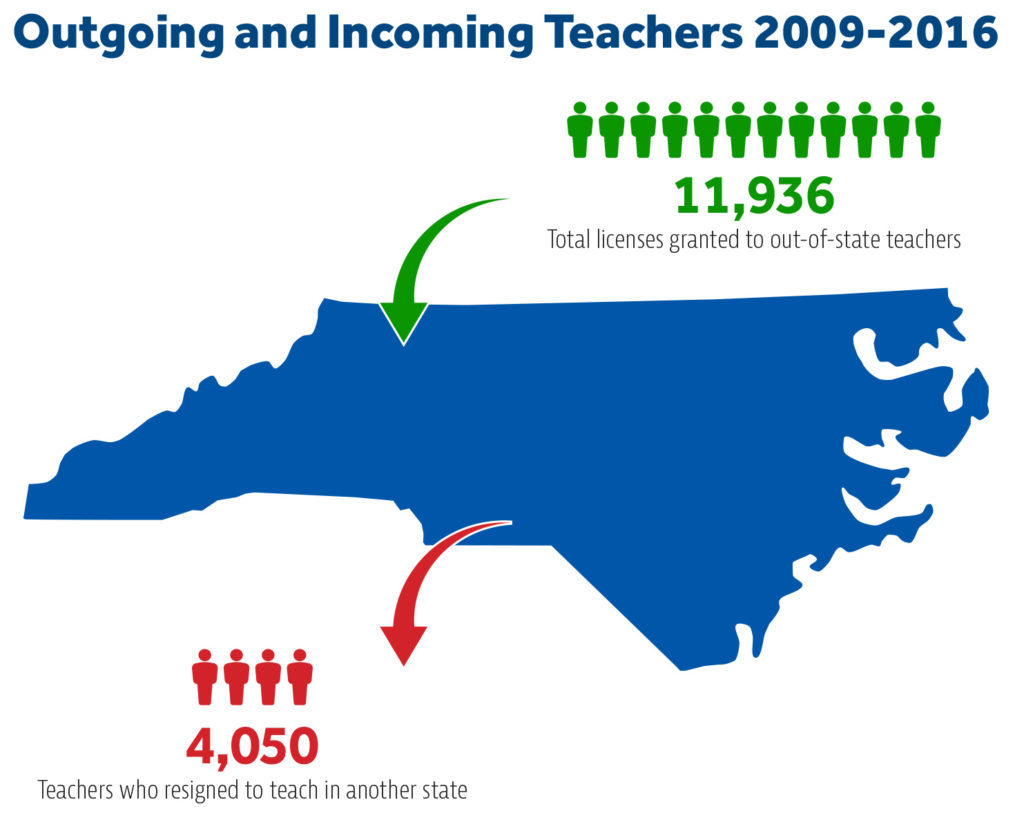 The data contradict a popular media narrative from recent years, Stoops said. “Public school advocacy groups and their allies contend that North Carolina is no longer a desirable destination for teachers,” he said. “They claim Republican-led legislative policies have sullied our state’s reputation in the eyes of the nation’s educators. The data tell a different story.”

The state welcomed 11,936 out-of-state teachers over the last seven years. During the same period, 4,050 teachers left to teach in other states. “Overall, that’s a net gain of nearly 8,000 teachers,” Stoops said. “It also represents a 3-1 margin in favor of teachers moving into North Carolina.”

The data deserve additional scrutiny, Stoops said. “The number of out-of-state teachers initially licensed and employed in North Carolina has dropped for three straight years, but the reason is not obvious,” he said. “It’s also unclear why the number of teachers leaving for other states dropped in 2015-16 after four consecutive years of increases. Researchers have only begun to identify the combination of factors that play the largest roles in these decisions.”

Population trends, state budgets, and economic issues related to the Great Recession all might have contributed to North Carolina’s recent experience with teachers’ moves into and out of the state, Stoops said.

“Theoretically, unemployed teachers in one state may have been willing to accept a teaching position in states, such as North Carolina, where vacancies were comparatively more plentiful due to population increases and sound budgeting,” he said. “As economic conditions improved, teachers might have been more likely to find opportunities within their home states. Regardless, the number of North Carolina licenses granted to out-of-state teachers appears to be returning to prerecession levels.”

“North Carolina and other states add formal requirements for out-of-state teacher candidates, often involving additional licensure exams or higher scores on those exams,” Stoops said. “In fact, North Carolina does not have 100 percent licensure reciprocity with any other state. That means obtaining a license in another state does not automatically grant full licensure in North Carolina.”

Seniority rules play very little role in preventing teachers from pursuing a job in North Carolina, Stoops said. “This is largely because teachers in this state are not subject to collective bargaining agreements that require the use of seniority to determine layoff or transfer decisions.”

The General Assembly can improve North Carolina’s prospects of attracting the best teachers by making teaching and living in North Carolina as broadly appealing as possible, Stoops said. “That is why lawmakers should initiate a multiyear effort to lower tax and regulatory burdens while implementing recruitment and retention strategies.”

Stoops cites six specific ideas. First, establish a scholarship program for college students pursuing careers in special education or science, technology, engineering, and mathematics, STEM, fields. “There is a nationwide demand for qualified candidates to fill teaching positions in these areas,” he said. “A deficit of teachers in high-demand disciplines is not something that our state could afford.”

Other ideas: salary supplements or bonuses for teachers in hard-to-staff subject areas and for others with demonstrated excellence; new leadership opportunities for outstanding teachers; stronger programs to expedite licensing for out-of-state teachers and for qualified professionals outside the teaching profession; portable pension options; and improvements in school working conditions.

“Neither the state government nor local school districts can compel public school teachers to remain in North Carolina, nor should we want them to try to retain teachers who fail to meet classroom expectations,” Stoops said. “Yet if North Carolina is losing good teachers to other states, then we should examine teacher retention efforts carefully. We also should implement policies and practices that make teaching in North Carolina as satisfying and rewarding as possible.”

Group of health clubs, gyms file lawsuit against the governor seeking to reopen

Taylor out, Gibson in as N.C. employment chief