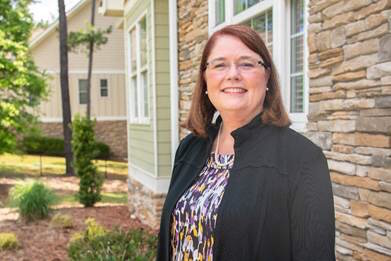 The University of North Carolina System Board of Governors on Thursday, April 25, named Kelli Brown chancellor of Western Carolina University. Brown’s appointment comes after a search — which at one point became contentious — that lasted nearly a year.

The position came open June 17 after David Belcher, a leader well-liked by many in the University of North Carolina community, died after a two-year battle with brain cancer. The search hit a roadblock July 12, when the board failed to vote on a candidate appointed by then UNC President Margaret Spellings. BOG members spent about two hours in closed session, and raised voices could be heard outside the room. No vote was taken, and an undisclosed chancellor candidate withdrew from consideration a few days later.

The UNC BOG restarted the search process after the tumult.

Thursday, the BOG met in Chapel Hill to vote on Interim UNC President Bill Roper’s recommendation for Brown to serve as the next WCU chancellor. Most of the meeting was held in closed session, and a vote was held with no open discussion from the board.

“Western Carolina deserves a chancellor with a keen focus on student and faculty success, and Dr. Brown has demonstrated that focus throughout her esteemed academic career,” Roper said in a news release after the vote. “I welcome her to the UNC System and look forward to working with Dr. Brown in her new role.”

“On behalf of the Board of Governors, I am thrilled to announce the selection of Dr. Kelli R. Brown to lead WCU into the future,” Smith said. “Western Carolina has seen tremendous growth, particularly now as an NC Promise institution. Now, under Dr. Brown’s leadership, it is poised to see even greater success.”

Brown has an extensive resume, participating in several professional health education organizations and community health outreach projects. She holds a doctorate in education from Southern Illinois University at Carbondale, master’s and bachelor’s degrees from the University of Toledo, and an associate degree in dental hygiene from Michael J. Owens Technical College in Ohio.

Brown currently serves as provost and senior vice president for Academic Affairs at Georgia College and State University. During her time at GCSU, Brown revitalized the Center for Student Success and helped increase the four-year graduation rate by 25%. Brown got her start at GCSU as a professor in the School of Health and Human Performance in June 2013.

In July 2016, Brown served as interim president of Valdosta State University before returning to her position at GCSU in January 2017.

“Dr. Brown distinguished herself as a top candidate in what I would characterize as an extremely deep pool of exceptionally well-qualified potential leaders for our university,” said Patricia Kaemmerling, chair of the WCU Board of Trustees and co-chair of the university’s chancellor search committee.

“I am pleased at the decision by the Board of Governors, and we all look forward to working with our 12th chancellor — and our first permanent female CEO — to build upon the strong foundation in place at WCU.”

Brown will start no later than July 1, 2019, and will receive an initial annual salary of $325,000. WCU will provide her a home in Cullowhee and will reimburse all reasonable moving expenses.