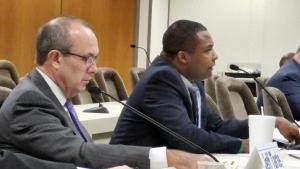 The Legislative Program Evaluation Oversight Committee is looking at potential options, such as shifting retirees to Medicare Advantage plans, a move that could save up to $64 million a year.

Sen. Louis Pate, R-Wayne, noted that at the rate of $64 million annually, it would take many years to cover the entire unfunded liability, which is the amount of money state taxpayers are obligated to pay future employee benefits that exceeds cash on hand.

Retiring that liability would require “a lot of bake sales coming up,” Pate quipped.

Kiernan McGorty, principal program evaluator for the legislature’s Program Evaluation Division, told the committee that other options to reduce the liability include increasing taxpayer subsidies to the fund, raising premiums for active employees, or requiring retirees to cover more of their insurance costs.

McGorty cautioned that before lawmakers take any action, legal issues must be taken into account.

“The issue of whether retiree health benefits are entitled to the same legal protections as the [state Supreme Court] has found for state pension benefits is the subject of a pending lawsuit referred to as the Lake lawsuit,” McGorty said. The state’s highest court has concluded that benefits promised to state employees when they are hired are similar to entitlements and cannot be reduced so long as employees continue working at the same jobs.

Moving forward, McGorty said, “these changes could be made for new hires without a threat of a lawsuit.”

McGorty said the state accumulated this liability by adopting a “pay-as-you-go model,” paying for retiree health benefits in the year costs occurred rather than building reserves. In addition, she said the state has offered other perks, such as not requiring employees to pay premiums or copayments for some benefit plans, along with making benefits available to employees who retire before age 65 or accept work outside state government.

The committee asked its staff to draft legislation with different options to reduce the liability.

Instead, he recommended that a single committee oversee all supplemental insurance, providing a uniform system statewide.

“The employee insurance committees are ineffective and have failed to manage the selection of supplemental insurance products,” Grimes said.

Grimes said more than half of state agencies and universities do not have employee insurance committees, some committees did not meet last year, and many allow vendors to offer insurance without a contract or without a competitive bidding process.

He said setting up a vendor account to make automatic payroll deductions and pay vendors costs about $1,080 per employee, with all those costs borne by taxpayers. Some vendors only have one state employee enrolled in their program.

“This report is tremendously scary,” said Sen. Jeff Tarte, R-Mecklenburg. “This is embarrassing.

Sen. Don Davis, D-Greene, asked if there would be any cost associated with moving the state to one supplemental insurance committee. Grimes responded that the state could make the move with the staff that is already in place.

Rep. Nelson Dollar, R-Wake, questioned the wisdom of moving to a central committee. “What do we lose when we centralize?” Dollar asked, rhetorically. He said employees could lose benefits to match specific needs.

Employees working in an office may want different types of supplemental insurance than Department of Transportation workers on highway crews, Dollar said.

“At the end of the day, we have never been able to figure out how not having the employees choose the companies that have the products that would uniquely suit their needs is the thing that makes sense,” Watkins said after the meeting. She said the proposed alternative would allow bureaucrats in Raleigh to make supplemental insurance decisions for correctional workers in Ashe County.

“To us that is nonsensical, and it’s putting more power in the hands of bureaucrats, and taking away competition,” Watkins said.