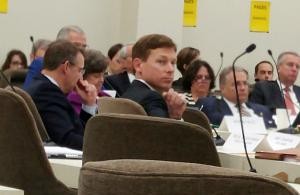 Lawmakers spent two hours Wednesday grilling the state budget director and the public safety secretary over the extension of a prison maintenance contract by a contractor who kept mentioning that, as a campaign contributor, he thought he should get something from the state in return.

State Budget Director Lee Roberts and Public Safety Secretary Frank Perry told the Joint Legislative Commission on Governmental Operations — the General Assembly’s top oversight commission — that they disagreed on whether maintenance at three prisons should be done in-house with state employees or whether the state could save money by farming maintenance out to a private company.

During the contract extension process, Perry said that the contractor, Graeme Keith Sr., mentioned his campaign contributions four times. Keith also had asked for the contract to be expanded to cover private maintenance at all 57 state prisons.

“I considered it perhaps a personality style,” Perry said of Keith’s contributions referral. “In fact, the first time I heard it I thought it was perhaps meant in jest or lighthearted.”

But Perry said that he heard Keith refer to getting something in return for his contributions too many times. He characterized the comments as “inappropriate.”

Perry said there was “no quid pro quo” connecting the contributions to the contract extension.

Perry said one of the Keith comments occurred during an Oct. 28, 2014, meeting in Charlotte called by Gov. Pat McCrory to mediate the disagreement between Keith and Perry over extending Keith’s maintenance contract. Perry said several conversations were going on at the meeting, and never said that McCrory heard Keith comment about campaign contributions.

Keith and McCrory have known one another for years. Keith contributed to McCrory’s and 2008 and 2012 campaigns for governor, and has made campaign contributions to Democrats and other Republicans as well.

Several of Keith’s business associates were at the meeting, along with other members of the Department of Public Safety, including deputy commissioner Joe Prater, whom Perry identified as the author of a brief internal memo on the meeting. Roberts did not attend the meeting.

Perry said that he suggested that Roberts conduct a cost-benefit analysis to determine whether the state would save money using in-house maintenance instead of a private contract.

Roberts did and recommended the private contract. Perry said he disagreed, but extended the contract with Keith’s company anyway. The contracts expire at the end of the year.

Democratic Reps. Larry Hall of Durham County and Susi Hamilton of New Hanover County questioned Perry and Roberts about ethical concerns arising out of statements made by Keith.

Hall asked Perry if he ever considered not extending the contract based on Keith’s conduct.

“No sir,” Perry responded. “That really wasn’t a motivator.”

Roberts said that it was during a phone conversation that he had with Perry that he learned of Keith’s conversations about his political contributions.

“Did it make you pause or halt what you were doing when you had a former FBI agent telling you that someone was making reference to their campaign contributions in an effort to get a contract?” Hall asked Roberts. “Did you think about not continuing with the contract?”

Hamilton questioned the appropriateness of the October 2014 meeting in Charlotte.

Perry said he thought it was appropriate for the governor to get involved in such meetings. Perry noted that when McCrory was mayor of Charlotte, he often mediated such meetings.

“I would respectfully disagree that it was appropriate for the governor to be there to mediate as if he were participating in a recruitment process for a company outside the state,” Hamilton said.

Sen. Harry Brown, R-Onslow, questioned Perry about Prater’s memo, saying that it didn’t contain items usually outlined in a memo, such as the date, its author, and who was sent it.

Perry said that apparently Prater intended the memo as a note to himself. He said he had only seen a paper copy of the memo, and that the original digital copy apparently had been deleted from a state computer.

Brown said that was a concern, noting that memos shouldn’t be deleted, but rather preserved as public records.