A legislative panel is hiring a special outside investigator to get answers from Gov. Roy Cooper about his creation of a $57.8 million discretionary fund tied to payments from Atlantic Coast Pipeline partners.

A Joint Legislative Commission on Governmental Operations subcommittee voted Wednesday, Nov. 14, to probe whether Cooper’s conduct was legal. The special investigator might be empowered to take depositions of executive branch officials and serve subpoenas.

Lawmakers wonder if the discretionary fund was a pay-to-play scheme.

“I’m not interested in any more sound bites from the Governor’s Office,” said Senate Majority Leader Harry Brown, R-Onslow, subcommittee co-chairman. He said the governor rebuffed lawmakers’ public and private attempts to get answers for nearly nine months. Materials supporting those efforts were released earlier in the day.

“I want to know whether the governor held this permit hostage until Duke [Energy] agreed to fund $58 million into a slush fund under his direct control, and possibly even a lot more than that,” Brown said. “We will uncover the truth, and when we do we will hold those people accountable.”

Requests for a response from the governor’s office were not answered. Cooper has failed to respond to previous requests for information on the unusual fund, which Carolina Journal first reported (see complete set of stories here). He maintains the fund was voluntary, and set up for economic development, renewable energy projects, and environmental mitigation.

During the committee meeting state Rep. Dean Arp, R-Union, and Sen. Paul Newton, R-Cabarrus, showed five versions of the memorandum of understanding the governor hammered out with the pipeline developers from Dec. 13, 2017, to Jan. 23. As the versions evolved, Cooper gained more control over the fund and higher payouts. 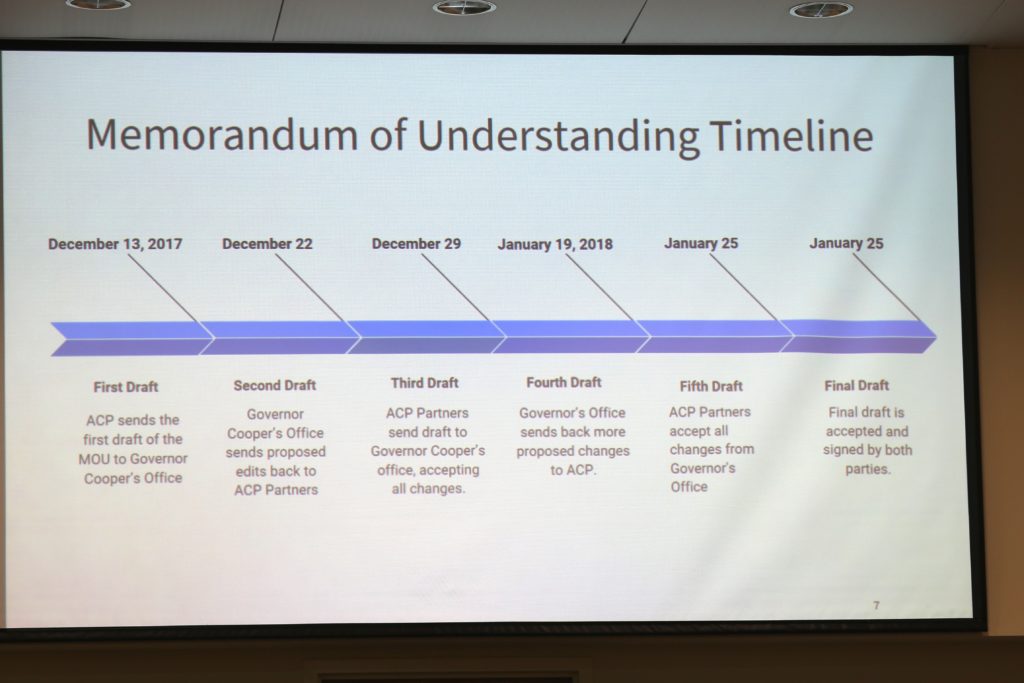 Legislators presented this timeline at the Nov. 14 meeting of an Atlantic Coast Pipeline oversight subcommittee. (CJ photo by Don Carrington)

The lawmakers said some information was missing from the Department of Environmental Quality website related to the permitting process, some was removed, and reappeared, and some new items were added.

They said DEQ technical staff and a hearing officer recommended approving the permit so pipeline construction could proceed. Yet a draft denial letter was written during this process — something typically done at a much earlier phase if problems were detected.

“This denial letter contains no specific reasons why the project would be denied,” Newton said. He wondered if the threat of a denial was used to force pipeline developers to capitulate to Cooper’s demands.

Newton said the pipeline partners signed off on the memorandum of understanding after the denial letter was drafted and given to Linda Culpepper, DEQ Division of Water Resources interim director. She replaced Jay Zimmerman, who was removed from the position after making progress towards approving the permit.

The lawmakers said Cooper’s discretionary fund was compensatory mitigation — a process outside state laws or regulations. But the parties already had agreed the pipeline developers would pay DEQ $11 million to cover environmental damage and repairs based on an established formula.

“We need to know if malfeasance is going on,” Arp told CJ after the meeting. While not accusing Cooper of a crime, he said lawmakers need to know why Cooper required payments from the pipeline coalition not mandated by law.

“That has a huge implication on the business environment of North Carolina,” Arp said. “Pay to play.”

Asked if the special investigator ask whether Duke Energy, Dominion Energy, and other pipeline partners suggested setting up the $57.8 million fund while they were seeking permit approval, Arp said the legislature does not have the power to control private companies’ actions.

“The question is the unequalness of the parties,” Arp said. “One holds your permit approval — or not — and the other one is trying to seek that. The question is how fair is that.”

Duke Energy wouldn’t answer CJ’s questions on several issues: If the pipeline operators thought the governor was coercing them into paying the extra money; who initiated the idea of paying tens of millions of dollars more than the formula; and why the fund was negotiated outside the regulatory framework. Instead, a spokeswoman said Duke made hundreds of revisions on the 600-mile project to meet permit guidelines, and develop mitigation measures in all three states through which the pipeline passes.

“The State of North Carolina determines how to administer those mitigation funds,” said Tammie McGee, spokeswoman for Piedmont Natural Gas, a unit of Duke Energy. They’ve sent no funds to the state.

Testifying before the subcommittee, Therese Vick of the Blue Ridge Environmental Defense League said her organization also had trouble getting Cooper to respond to public information requests about the mitigation fund. Her organization thinks there were many reasons to deny the permit, she said, “and the money was used to sweeten the pot.”

“We have been Twitter-shaming the governor,” she said. The group’s attorney sent a letter demanding answers under the public records law and got no response. Vick thinks Cooper wanted the additional money to calm environmentalists upset about approving the permit.

Moore’s memorable milestone will place him in interesting company