A lawsuit filed by the president of a conservative policy organization says the North Carolina Constitution requires payments from a 2000 agreement between pork producer Smithfield Foods Inc. and the North Carolina Department of Justice go to public schools instead of being used by the attorney general to award discretionary grants.

Civitas Institute President Francis De Luca, claiming standing as a state taxpayer, filed a lawsuit Oct. 18 against Roy Cooper in his capacity as the attorney general of North Carolina. De Luca is seeking to have Cooper recover the awards made within the last three years, redirect those funds for the benefit of public schools, and direct all future payments from Smithfield Foods to public schools. De Luca told Carolina Journal that Cooper is operating a “slush fund.”

“This lawsuit is about the constitution and previous court decisions which say these types of settlements must go to public education,” De Luca said. “The A.G. does not have the authority to divert these monies from education into a slush fund to give out to favored political entities.”

De Luca’s attorney, Paul “Skip” Stam, told CJ that since the suit is against Cooper in his official capacity, the rules of civil procedure mandate that his successor automatically will become the defendant. Since Cooper is not seeking another term and instead is running for governor against incumbent Republican Pat McCrory, the winner of the Nov. 8 general election for attorney general — either Republican Buck Newton or Democrat Josh Stein — will become the defendant.

The Smithfield Agreement was the result of then-Attorney General Mike Easley’s concern about environmental pollution related to hog farming. After hog waste lagoons overflowed into North Carolina rivers in 1999 as a result of Hurricane Floyd, Easley began discussions with Smithfield, Va.-based Smithfield Foods, the nation’s largest hog processor. The company has slaughterhouses in North Carolina processing its own hogs and those raised by contract producers. Easley also was running for governor in 2000. The agreement was signed in July 2000 by Easley, Smithfield Foods, and five of its subsidiaries.

It called for Smithfield to pay $15 million to North Carolina State University to identify and develop waste-handling technologies that were better than the common practice of directing waste to lagoons and spraying it on fields after the waste is deemed safe and weather conditions are favorable.

The agreement also called for Smithfield to pay up to $2 million annually for 25 years to “Environmental Enhancement Projects” designated by the attorney general without defining how projects would qualify for funding or which projects were considered high priorities. Cooper was elected attorney general in 2000. He took office in 2001 and has been awarding the grants every year since the program began.

Even though the agreement states, “the companies have entered into this binding agreement freely,” the threat of a lawsuit always was looming, and at times news organizations reported that the state had filed a lawsuit. For instance, ABC television affiliate WLOS in Asheville opened a report about the settlement stating, “Smithfield Foods, the world’s largest pork producer, reached a settlement in an environmental protection lawsuit filed by the State of North Carolina in 2000, in which it agreed to pay the state $50 million over 25 years to improve the environment.”

According to Cooper’s office, he has awarded more than $27 million to more than 100 recipients through the Environmental Enhancement Grants Program. The Smithfield Agreement states: “The funds will be paid to such organizations or trusts as the attorney general will designate. The funds will be used to enhance the environment of the state, including eastern North Carolina, to obtain environmental easements, construct or maintain wetlands and such other environmental purposes, as the attorney general deems appropriate.”

The lawsuit contends that the North Carolina Constitution requires that settlement funds go to the state’s public schools, and that a 2005 North Carolina Supreme Court decision clarified the issue. That Supreme Court decision set a three-year statute of limitations for seeking recovery of funds. The De Luca lawsuit asks the court to require Cooper to recover the grant funds awarded in 2014, 2015, and 2016.

Cooper’s office disputes the claims made in the lawsuit. “The Smithfield settlement includes no fines, forfeitures, or penalties, and the payments are not made to our office or the state,” Cooper’s spokeswoman, Noelle Talley, told CJ.

The Smithfield Agreement does not address exactly who receives the annual $2 million payments from Smithfield. Documents supplied by Talley to CJ indicate that PNC Bank is the trustee; the bank presumably collects and deposits the money from Smithfield and writes checks to the grantees when Cooper says so.

Article IX, Section 7 of the North Carolina Constitution provides that the “clear proceeds of all penalties and forfeitures and of all fines collected in the several counties for any breach of penal laws of the state, shall belong to and remain in the several counties, and shall be faithfully appropriated and used exclusively for maintaining free public schools.”

In 1998, the North Carolina Department of Environment and Natural Resources issued a policy allowing a party that violates environmental law to direct a portion of a civil or criminal fine to a “Supplemental Environmental Project.”

That same year the North Carolina School Boards Association and several individual local school boards filed an action in Wake County Superior Court. They asked the court to require DENR fines and other payments imposed by various state agencies be paid to the public schools.

The case eventually made it to the state Supreme Court, and in 2005 the court agreed that money paid to fund a Supplemental Environmental Project was subject to Article IX, Section 7 of the state constitution and those funds must go to the public schools.

De Luca told CJ that the Environmental Enhancement Grant program, developed by Easley and administered by Cooper, is similar to the Supplemental Environmental Project program and therefore unconstitutional.

One of Cooper’s grants went to an organization that earlier this year helped underwrite issue ads critical of McCrory.

In August 2014, Cooper announced the 12th cycle of Environmental Enhancement Grants. Eight organizations received a total of $1.9 million. The Pamlico Tar River Foundation was awarded $129,309 “to install and restore wetlands to treat and reduce stormwater runoff on the campus of Edgecombe Community College. The project will improve surface water quality in the Tar-Pamlico River Basin and provide educational opportunities for students and members of the community.” 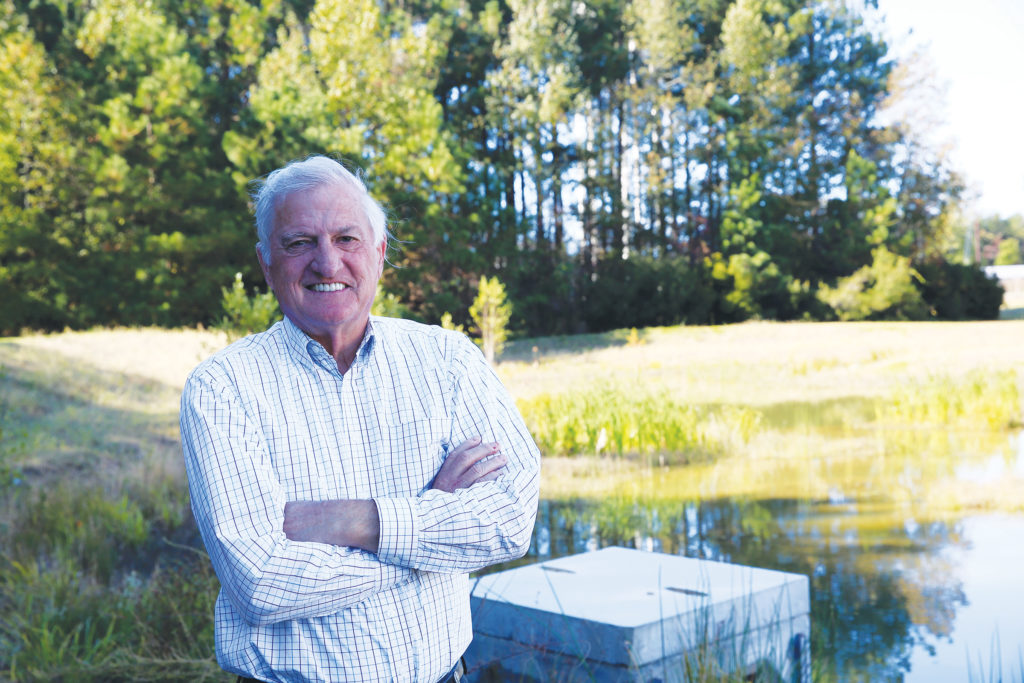 Edgecombe Community College Vice President Charlie Harrell told CJ that the college was very appreciative of the stormwater work that was done as a result of the grant. He noted that the college did not handle any of the funds.

In October 2015, WRAL of Raleigh reported that the N.C. Environmental Partnership began airing a television ad critical of McCrory’s support for hydraulic fracturing, or “fracking.”

According to a July story in the Raleigh News & Observer, the N.C. Environmental Partnership had spent $1.6 million on ads critical of McCrory.

CJ sought clarification from Sound Rivers about a possible conflict as a Cooper grant recipient that also was paying for ads critical of Cooper’s opponent in the race for governor. A spokesman for Sound Rivers told CJ the organization had no comment at this time.

Each year, Cooper’s office issues a press release listing the most recent grant recipients and the amount of the award, along with a description of the project the grant is supposed to fund. It also invites parties to apply for the next round of grants.

While over time, some of the grants have had a direct connection to improving water quality associated with hog farms, the most recent ones have not.

In August Cooper announced a total of $2 million would go to the following projects:

Polls should be scaring Democrats

No time: A common theme emerges at public hearing on redistricting